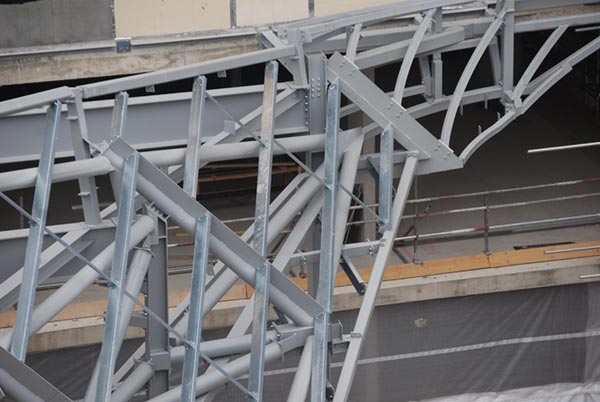 Complex and bespoke members are a feature of the Wave

Known as Greenwich Square, the scheme will deliver 645 new homes, with apartments, maisonettes and town houses, which comprise of 331 private, 170 social and 144 shared ownership.

A new public square is enclosed within the development by three residential blocks. Within this courtyard and extending into the lower levels of the adjacent structures, a civic centre will feature two swimming pools, a fitness suite, dance and exercise studios, retail spaces, a library, a crèche and café, and a healthcare clinic.

The civic centre will essentially be triangular in plan and will be called the Greenwich Centre. According to project architect Make, it will be an important local destination for the whole community.

Signposting the centre and forming a sculptural link to the development from nearby Woolwich Road is one of the development’s feature elements; the steel-framed Wave.

Measuring 55m long, the Wave is multi functional as it is an entrance canopy, roof structure and an internal wall to the Greenwich Centre’s atrium. 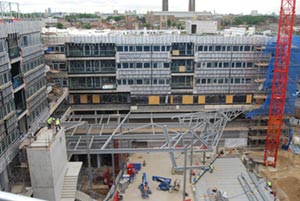 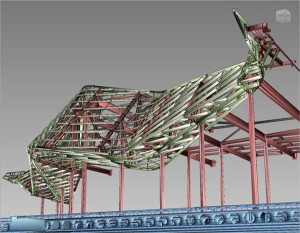 Designed, detailed and delivered in a complete 3D BIM modelling exercise between the entire project team, the Wave is so called because of the way it twists and undulates along its entire length.

“It is a highly complex steel structure and utilising BIM was essential in avoiding any clashes and ensuring that the structure was erected efficiently,” explains Gareth Stone, Mace Project Manager.

Early in the design process, project engineer Meinhardt worked extensively with Make Architects to come up with a concept for the Wave that would be buildable.

“As the structure is sat on a podium that covers the Centre’s swimming pools, minimising the weight was one of the important criteria and one of the main reasons for using steel,” says Nick Gillespie, Meinhardt Director. “The entire Wave structure only weighs 86t.”

Forming the primary structure of the Wave is a series of steel trussed frames, made from 219mm diameter CHS sections. Secondary steelwork, which is a combination of either cold rolled or RHS sections, act as purlins and cladding rails and form the wave-like curvature and profile.

Stability in one direction is gained from a series of steel rafters, up to 14m in length that form the rear portion of atrium’s roof and connect the Wave back to the residential blocks. The primary trusses also contribute to the stability by acting as moment frames.

The Wave is primarily supported by a series of 14.5m-high slender columns, spaced at 4.8m centres. However, the profile of the Wave results in members being significantly longer than the column grid might suggest.

“The truss members that span between the columns vary from 6m up to 9m depending on the structure’s curving profile,” says Nick Thompson, TSI Structures Director.

Fabrication and erection of the Wave has been very complex due to the huge number of individual pieces, most of which are bespoke. There are more than 1,000 individual pieces in the structure, all joined together by bolted connections.

For the erection programme, TSI Structures utilised one of the site’s tower cranes for all lifting duties, using the completed podium as a materials lay down area.

Working from one end of the Wave to the other, TSI Structures erected the structure in a sequential manner, bay by bay, along with the associated columns and the beams connecting to the main structure.

“Once the frames and the bracings were up we then attached the secondary steelwork,” adds Mr Thompson. “Cold rolled sections where used for the straight members, while RHS’s were used for the curved steelwork.”

TSI Structures contracted steel bending specialist Angle Ring to curve the steelwork. As well as bending RHS sections, some of the primary CHS members also had to be bent.

These CHS members were very complex as they had to be bent in two directions and in order to accept the cladding, flat plates needed to be welded on to them.

The entire Wave structure’s steelwork was completed during July and now the cladding, which consists of silver coloured rainscreen, is being installed.

The entire Greenwich Square development is due to be completed in 2018. 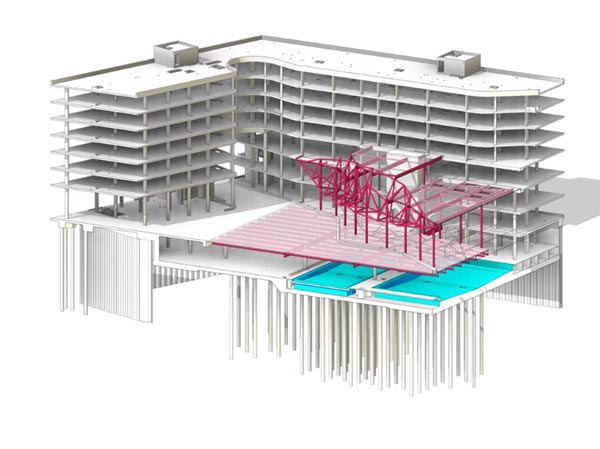 The Greenwich Centre’s two swimming pools (a 25m-long pool and a 20m-long learner pool) are both accommodated within a 7m-deep basement positioned beneath the Wave.

Three rows of 18m-long cellular beams form the 54m x 30m pool area, which is not only positioned below the Wave and the atrium but also partially below the new public realm.

Because the pool area will be a highly corrosive zone, all of the cellular beams, which are all left fully exposed within the completed building, were painted off-site prior to installation.