Topping out a record breaker 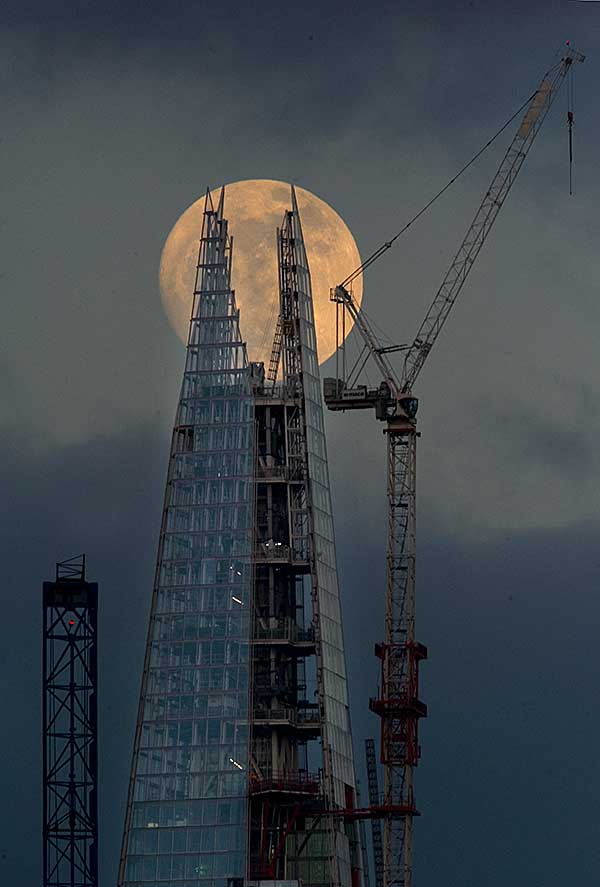 Steelwork erection for the Shard’s uppermost levels, known as the Spire, has been completed. NSC reports from western Europe’s tallest building, a project where pre-assembly and modular construction have taken centre stage.

The final elements of steelwork for the top of the Shard (spire) were lifted into place during the last days of March, keeping the project on course for its imminent completion date. This notable landmark has set a new benchmark for high-rise construction, as the top was prefabricated into a number of modules. 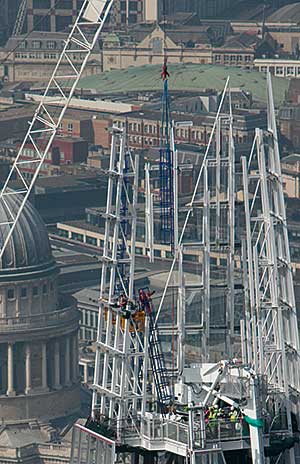 The methodology of building the spire (levels 72 to 94) ensured it was assembled in as few pieces as possible, which led to fewer crane lifts and less time spent erecting the structure hundreds of metres in the air.

The project team also decided to make sure they ironed out any problems with this modularisation prior to going to site, and consequently carried out a complete offsite trial assembly at steelwork contractor Severfield-Reeve’s Dalton facility. This focused on the optimisation of components, the order in which they would be delivered to site and the lifting procedure. The Spire was set out and fixed onto support points identical to those they would use on site.

This final element of the Shard’s overall structure is 60m tall, weighs 530t and is made up of 460 pieces of steel.

“This part of the steelwork package had to be designed in a way to suit manufacture and safe site erection, and the modular solution meant we had fewer connections which meant less working at height,” explains Severfield-Reeve’s Project Manager Doug Willis.

The modules all had to be within the on-site tower crane’s lifting capacity of 7t, as well as being transportable for the journey to London. Horizontal elements measured up to 3m × 7m, while vertical sections measured up to 3m × 7.8m. The installation process followed a regular sequence of erecting a steel core, followed by the outer elevations and then the floor panels.

Each floor is different. At level 72 it is composite deck, at level 75 solid steel plate with waterproofing detailing (this is the Shard’s roof since, above this level, the structure is open to the elements). Above level 75 the floors are made up of open aluminium flooring, or a galvanized steel grill. 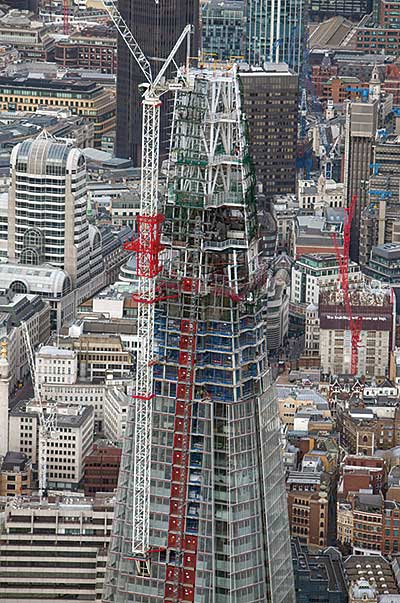 Each module was able to include elements such as the main structure, floor, catwalk gantries and cladding rails. However, where pieces became too large, they were erected as individual entities – such as for some cladding rails. To simplify some of the column-steel core connection details, stubs were pre-welded onto each component to make them easier to locate.

The sequence of construction consisted of erecting the central steel core first, then installing a temporary steel platform to support mobile elevating work platforms (MEWP’s)which would be craned into position. The MEWP’s allowed the steel erectors to build the external truss which would then cradle the modules, known as cassettes. Further connections were made possible by attaching erectors to a gallows-frame type post which sat on top of the steel core.

“The trial assembly made sure every bolt fitted in every hole so that on site, the guys in the MEWP’s could bolt the underside of the module and the guys attached to the gallows could complete connections above,” says Mr Willis. Not forgetting all the while that this work is taking place more than 250m above ground level, where adverse weather could bring operations to a halt at any moment.

At level 87, the highest of the floors, there is also a requirement to have a building maintenance unit which sits on stubs on the steel core. The steelwork cantilevers about 20m off level 87, which created a further challenge since it was even more exposed to the elements.

The Shard – the whole story

The Shard tops out at a height of 310m and more than 13,000t of structural steelwork has been erected on this project situated adjacent to London Bridge Station.

Said to be Europe’s first major mixed-use building and designed by architect Renzo Piano, the Shard has a hybrid steel and concrete design. Steelwork has been used from ground floor to level 40, then up to floor 69 concrete takes over as the framing material, before the design reverts back to steel for the spire.

The lateral stability for the structure is based on a vertical spine consisting of a cantilevered concrete central core stiffened by a steel outrigger hat truss at high level (floors 66-69) engaging the perimeter columns of the building.

The central core stops at level 72, which is the top floor of an upper viewing gallery which extends from level 69 to 72. The gallery was erected by Severfield-Reeve as the initial segment of its second steel erection programme, to install the Spire, and was the first element of the modular construction segment. 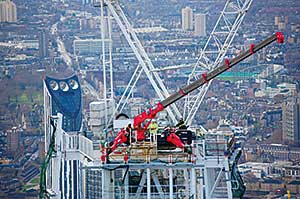