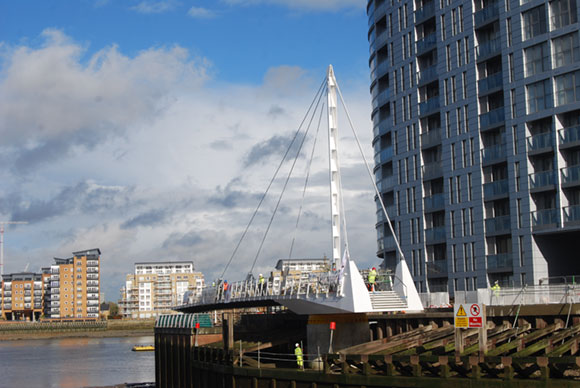 The bridge was constructed in its open position

A new cable-stayed swing bridge at Deptford has improved riverfront access for long distance walkers while also taking on board maritime heritage.

Today, the docks too have closed down and moved further downstream along the River Thames to Tilbury. However, river traffic is still abundant and consequently many of the new developments springing up along the capital’s riverfront have to take this into account.

This has been the case at New Capital Quay, a residential scheme developed by Galliard Homes on the south bank of the Thames adjacent to Deptford Creek.

As part of the development Galliard has been obliged to provide a footbridge that spans the inlet and also opens to allow aggregate barges upstream to the local ready-mix batching plant. Galliard commissioned Raymond Brown Construction to build the new bridge, while Flint & Neill led the design team. 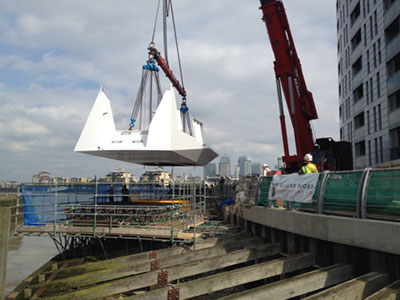 A bridge section is lifted into place 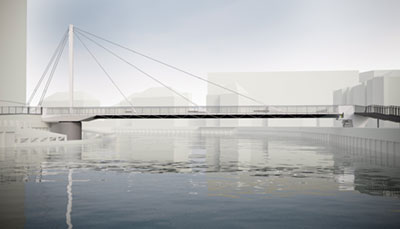 “The development had to increase public access along the Thames riverfront without hindering waterborne traffic entering the creek,” says David Knight, Flint & Neill Senior Engineer. “A cable-stayed swing bridge was the solution as it can be swung open by 100 degrees to be completely clear of the river.”

The proposals also ensured the project would be sensitive to the local maritime history and to the client’s wish for an economical low maintenance structure.

“We then chose a steel design for the bridge as its lightweight qualities would minimise the size of the required M&E equipment,” adds Mr Knight.

It has a sculptural form, said to be suggestive of sailing vessels, with folded steel plates that conceal a short 9m backspan containing 120t of steel counterweight. This balances the 44m-long main span as it opens.

The span is opened or driven by four electrical drive motors on a slewing ring bearing system that is more commonly seen on tower cranes.

The structure is predominantly fabricated from weathering steel that negates the requirement for any future internal repainting.

S H Structures fabricated, supplied and erected the steelwork for the job. As the site was accessed through an existing housing scheme and space was at a premium, a lot of planning was needed to work out the best construction sequence as well as the size of steel elements that could be manoeuvred and transported on to site.

“We fabricated and delivered the bridge deck to site in three main sections,” explains Dave Perry, S H Structures Contracts Manager. “These were transportable by road albeit with a police escort through London.”

The two main span sections were 19m long and up to 5.6m wide as the bridge’s width varies with a minimum width of 3.8m. The third piece was the backspan section and this measured 15m long x 5.6m wide and weighed 15t.

Onsite assembly of the bridge was conducted on the bank of the Creek and in a position that was identical to the structure’s open position. The backspan was lifted into place first. Using a 300t capacity mobile crane it was lifted onto the slew bearing that had previously been installed into the bridge’s foundations.

The two main spans were welded together and then welded to the backspan to form the bridge deck structure.

The tapering 15m-high mast was then brought to site and attached. It consists of a pair of flat 40mm thick plates separated by inclined plate stiffeners. This creates an open transparent structure that acts like a Vierendeel strut in compression.

Using a 70t capacity mobile crane S H Structures then had to attach the cable stays to the mast and make sure they were stressed to the correct tension.

Plated steelwork has also formed the abutment onto which the closed swing bridge rests. This is a 3.5m-high raised platform measuring 4m × 5m and brought to site as one 10t piece.

On the opposite bank a four span steel approach structure is also formed from plates, each weighing 9t and bolted together onsite to form the ramp.

A nine-month construction programme was completed in November and the bridge was opened to pedestrians on completion of the local council adoption.

Bridge is a trailblazer

The Greenwich Reach Swing Bridge has enhanced the Thames Path, the National Trail that opened in 1996 and follows the length of the river from its source in Gloucestershire all the way to the Thames Barrier at Charlton, a distance of 296km.

Previously the Path had to deviate inland at Deptford Creek, through housing estates and over busy roads before reaching Greenwich.

The bridge has closed one of the gaps in the Thames Path, by creating a new and easier route over Deptford Creek and along the River Thames’s south bank.