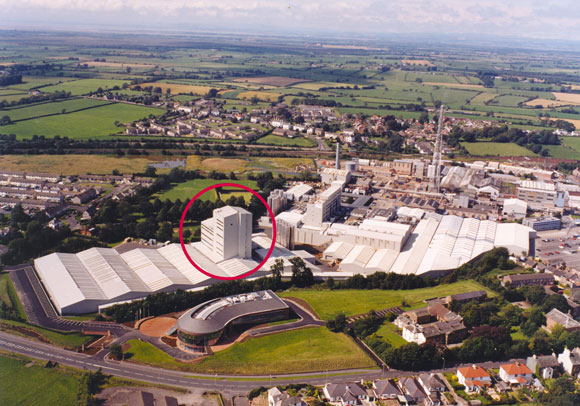 Steel is playing a leading role in aiding Innovia Films, one of Cumbria’s leading employers, to expand its manufacturing facility without disrupting onsite production.

The company is currently undertaking a £20M investment package that includes the construction of an additional BOPP production area that will help increase output by up to 10%.

The new facility is a steel framed extension added to the existing BOPP production building. Importantly, all work is being carried out without any interference to the adjacent production processes.

“Our BOPP production process is a 24/7 operation every day of the year and the steel extension is being built in such a way that it doesn’t interrupt the work in any way,” says Simon Butcher, Innovia Films Senior Design and Development Engineer.

The new steel frame has been bolted on to one end of the existing building. In order to not cause any disruption during the erection process, steelwork contractor Border Steelwork Structures cut openings in the existing building’s cladding to allow for each steel beam connection between the new and old frames. 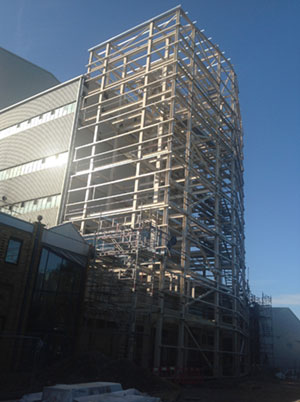 The new steelwork connects to the existing steel framed building 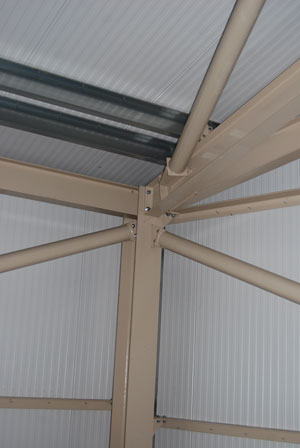 A steel connection for the structure’s roof 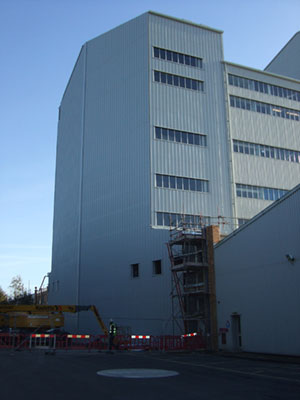 “Once a connection was made we then made sure the hole was watertight before moving onto the next steel connection,” explains Stuart Airey, Border Steelwork Structures Senior Contracts Manager.

Keeping the majority of the existing building’s cladding system in place during the construction programme created an effective barrier that allowed work to carry on normally within the plant.

The cladding was only removed once the extension was at a watertight stage in its construction process, and then a temporary sheeting system was installed to separate the two areas during the machinery fit-out.

The steel framed extension has been predominantly erected around a 6.7m × 5.1m grid pattern, and measures 22m long × 11m wide and 37m high.

“Basically we’ve designed the extension as a mirror structure as the column centres and the floors up to level five match the existing building,” says Nigel Perry, A L Daines and Partners Project Engineer.

“However it is 3.5m higher than the existing building as we need to accommodate additional equipment for a more up-to-date BOPP production process.”

The extra height of the extension also accommodates a series of mezzanine levels and one extra floor and these do not tie-in with the adjoining floors.

This extra floor was added to the design quite late in the day and because of steel’s flexibility it did not hinder the project’s progress in any way.

Work on the project started towards the end of 2013 and initially main contractor Story Contracting had to partially demolish an office block to make room for the production extension.

A 7m wide low level area of the new build now connects into the remaining part of this office block via an existing glazed atrium.

Once the preparatory work had been completed Border Steelwork Structures began its 34-week steelwork and cladding programme.

One mobile crane and, because of the building’s height, two 42m reach MEWPs were used for Border’s entire programme.

The extension is a steel braced frame, gaining its longitudinal stability from the existing frame, with additional stability given by CHS diagonal struts located along the main elevation at every floor level.

The extension has a skew along its main elevation due to site constraints and consequently it is not a perfectly rectangular building.

The steel design has also incorporated the heavy loadings that the processing equipment will exert into the steel frame.

“Many of the steel sections are larger than they would have been if it was not a factory extension,” says Mr Perry. “This over-engineering of the steelwork also has the benefit of added fire protection, as larger steel members were a more effective solution in this case.”

Border’s steel and cladding programme was completed in October and Innovia Films are currently undertaking the machinery fit-out, work that also includes installing additional steelwork within the extension to support equipment.

Summing up Mr Butcher says: “Border is a long-standing partner and has worked at this site on and off for more than 30 years. They even erected the existing production building in two previous phases in the 1980s. They erected and clad the extension on schedule and production is due to begin in March 2015.”