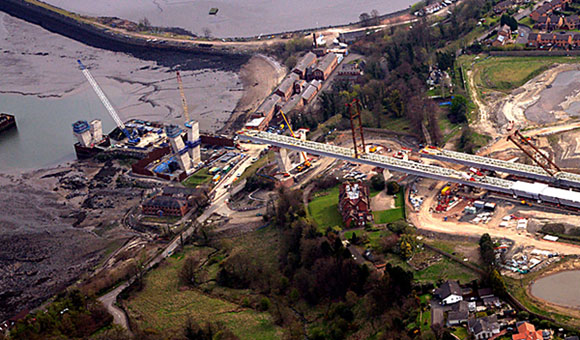 The south approach viaduct under way

The new Forth Crossing requires the construction of two lengthy steel formed approach viaducts which are being incrementally slid into position.

The new road bridge linking Edinburgh with the county of Fife, and sitting alongside its famous neighbours, the Forth (rail) Bridge and the Forth Road Bridge, will be the longest three tower cable-stayed bridge in the world replacing the current road bridge as the main vehicle crossing of the Forth.

Three towers will rise 207m above high tide sea level from which 23,000 miles of stay cabling will be attached. The bridge will have two 650m-long central spans and two further spans of 223m. Including the approach viaducts and road improvement schemes on either side of the Firth of Forth, the project has a 22km-long footprint.

Forth Crossing Bridge Constructors (FCBC), an international consortium consisting of Hochtief Solutions, American Bridge, Dragados & Morrison Construction, is delivering this huge project and has awarded Cleveland Bridge the contract for the fabrication, delivery and site assembly of the two approach viaducts. 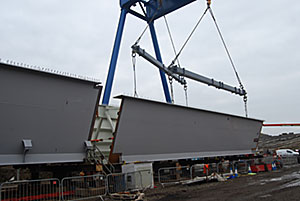 Girder sections are welded together onsite before being launched 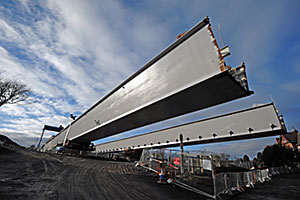 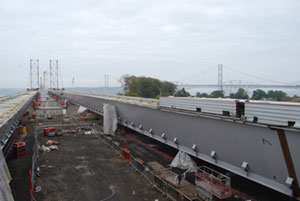 Work on the approach viaducts is being done concurrently with the main bridgeworks. The 545m-long southern viaduct steelwork was completed in December (2014) and work has now switched to the north shore with the northern structure scheduled to be finished later this summer.

For the south approach viaduct, the steelwork consists of a total of 38 twin open top trapezoidal box girders, each 8m wide × 4m high and up to 33m long. The girders were fabricated in half sub-assemblies, split longitudinally, at Cleveland Bridge’s Darlington factory allowing them to be transported to site by road.

They are then welded up onsite to form the complete girders that in turn were welded into two parallel steel decks for the approach structure. Once steelwork is completed, a concrete deck will be cast to form separate northbound and southbound road decks that will lead on and off the new bridge.

“Offsite construction is playing an important role as, although we do have a lot of onsite welding to do, there would be a lot more of this time-consuming work if Cleveland weren’t prefabricating these large sub-assemblies,” says Gabriel Menendez-Pidal, FCBC Head of Section.

Cleveland Bridge initially setup an assembly and delivery yard, complete with an overhead crane, adjacent to the southern viaduct. Sub-assemblies were unloaded onto assembly jigs positioned above a launching track.

Once two halves were welded together to form one complete unit, it welded to another complete girder to form a portion of deck and these are slid into position using incremental launches.

“A total of 12 launches (six on each side) were needed to complete the southern approach,” says Stephen Osborne, Cleveland Bridge Operations Manager.

The incremental launch procedure involves a series of welded-up girders, to a combined length of around 100m at a time, being slid from the assembly yard out over the piers. Launching bearings with Teflon pads are used on top of the six pre-prepared concrete piers.

The girders are pulled by a series of strand jacks positioned on an H-frame supported at the south abutment structure.

After each launch, a further series of girders is attached to the end of the previous launch and the next slide is ready to take place.

Steelwork on the southern approach viaduct has been completed and the entire steel assembly yard and its crane have now been dismantled and transported over to the north shore where a new facility has been setup.

For the north approach viaduct Cleveland Bridge is assembling the entire viaduct behind the north abutment, and once complete the entire structure will be launched into position during one three-day long operation.

“The northern structure is different to the south as the steel boxes will form a single deck structure that attaches to the main bridge, while the final 75m of the viaduct will be the same as the southern viaduct as two parallel decks finishing at the north abutment,” explains Mr Osborne.

The north approach viaduct will be supported on two piers and will also be attached to the north tower by cable stays. This approach viaduct is scheduled to be completed and in position later this year. 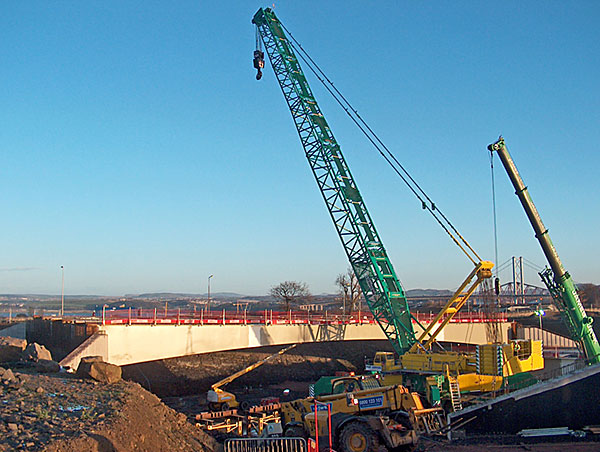 As well as the Forth Replacement Crossing’s two approach viaducts, four other bridge structures are being constructed as part of the scheme’s necessary surrounding road improvement works.

Forth Crossing Bridge Contractors (FCBC) has contracted Mabey Bridge to fabricate, supply and erect these structures, a job that is scheduled to be completed in March.

Two of these bridges have been erected on the south shore as part of a new approach interchange carrying the existing A904 over the recently constructed M90 approach road. Each of the identical structures is formed with six 60m-long steel girders that were delivered from Mabey Bridge’s Chepstow factory to site as 20m-long braced pairs.

The pairs were welded or bolted into the required 60m lengths in an adjacent assembly area and using a 750t capacity mobile crane, erected as three braced pairs each weighing 160t.

“The inner girders for both structures were bolted, while the outer girders were welded into long lengths for aesthetics,” explains Chris Reynolds, Mabey Bridge Site Operations Manager.

Over on the north shore Mabey Bridge has recently completed two more bridges, one of which is the largest structure of the contract.

Known as Structure FT01, the bridge spans the recently constructed B981 road and links the A90 to the new M90 approach carriageway to the new crossing. It incorporates a curving road and so it has a skewed layout whereby the inner span is 80m–long and the outer span is 110m-long.

Requiring 2,000t of structural steelwork, FT01 has been formed with nine rows of trapezoidal boxes, with each box measuring 3.5m high and up to 4.5m wide.

The boxes were brought to site in lengths of 30m, each weighing up to 53t. Once assembled into full bridge lengths weighing up to 180t each, they were lifted into place using a 600t capacity crawler crane.

“The design incorporates trapezoidal boxes as they help keep the overall weight of the structure down for such a long span structure,” says Mr Reynolds.

The fourth structure and the third to be erected on the south shore is known as Structure ESQ4, which will carry the B800 over the A90.

This 110m-long replacement bridge spans the existing A90 into Edinburgh and a major utility route. It was delivered to site as nine braced pair sections, weighing up to 75t each.

Once onsite they were lifted into place using a 1,000t-capacity mobile crane.

“Because of the importance of the utility route and the requirement for a night time closure of the main road from the north into Edinburgh, we carried out trial lifts of the three pairs of girders that span the pipeline to ensure the procedure would be faultless,” explains Mr Reynolds. 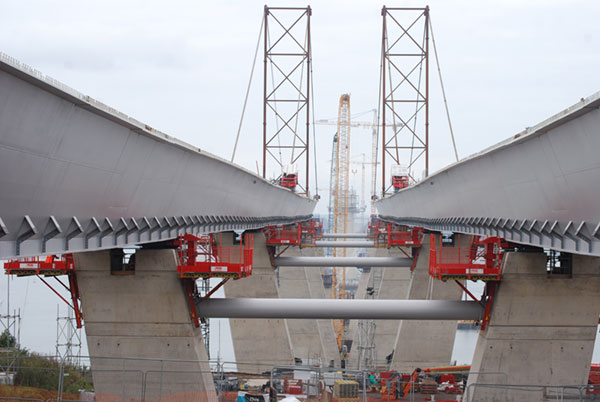