A design in isolation

Posted on May 1, 2012 by NSC in Projects and Features, This month's featured stories 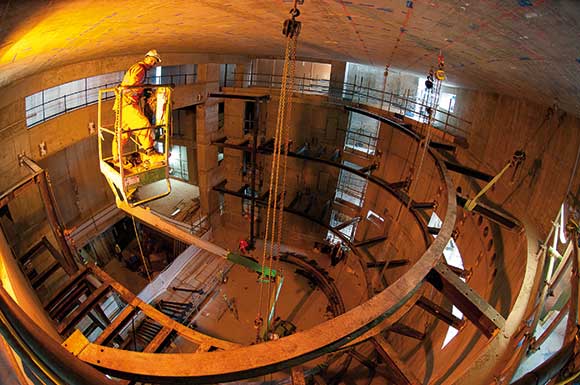 Cantilevering steelwork is hoisted into place within the flytower

A number of performance spaces, all needing to be acoustically isolated, have been constructed with a complex steel design at the new Guildhall School premises in London.

The renowned Guildhall School of Music and Drama has embarked on a major building project to expand its City of London facilities. Known as Milton Court and located adjacent to the school’s current building, the new premises will open next year providing state of the art performance and teaching spaces. Combined with its neighbour, the Barbican Arts Centre, it will be an international cultural destination 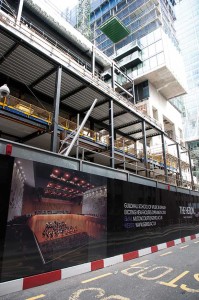 The Exterior of the new school premises

Part of The Heron development, that also includes residential accommodation, the lower floors of the scheme will house the school’s new facilities and include a 608 seat concert hall, a 227 seat theatre, a studio theatre, three major rehearsal rooms and a TV studio suite.

The residential portion of the project consists of a concrete tower with the majority of school facilities housed in an adjoining steel framed structure. This school building goes up to level six and is formed by a series of full height plated girder columns which are connected to the concrete structure via 18m long roof beams forming a landscaped rooftop terrace.

The girder columns and roof beams form what has been described as the outer box, as all steelwork within this shell is acoustically isolated – a box within a box construction. Much of the internal steelwork (the inner box) has been infilled with concrete between flanges to enhance the acoustic performance. The roof girders were partially encased in concrete by the concrete contractor to form a high quality exposed concrete soffit to the concert hall. including the long roof beams. These concrete encased steel members weighed in at around 12t each and constituted steelwork contractor William Hare’s heaviest steelwork lifts of the project.

All columns in the concert hall rest on acoustic bearings

The steel design is very complex and because of the various performance spaces housed in the structure acoustically isolating each area is of upmost importance. “Only the perimeter columns are fixed to holding down bolts, inner box columns are all seated on acoustic bearings, without any fixings to the concrete below. This ensures that the acoustic gap is maintained, meaning the inner box steelwork is floating,” says Gary Simmons, William Hare Technical Director. 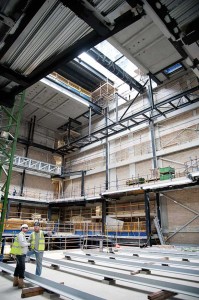 Between the outer perimeter steelwork and the inner box there is a continuous acoustic cavity to prevent sound transfer from outside to the inner box and between individual inner box spaces, such as the basement studio theatre and rehearsal rooms.

Isolation extends beneath the floors by use of ‘floating slabs’ on acoustic bearings. These slabs are formed using Omnia plank slabs on inverted steel T sections, which are supported on bearings. There are a multitude of floor slabs at varying levels, forming the theatre’s stage, seating areas, storage levels and scenery lift space. All of these slabs are supported by steelwork and constructed with either metal decking or precast planks.

With so many interfaces between concrete and steel as well as the multitude of isolated levels, coordination between all of the projects trades was all important. Daily meetings were held to discuss progress and which areas were ready for further steelwork erection or concreting.

A key design feature of the steel frame was ensuring temporary stability and lateral restraint to the columns due to the absence of holding bolts on most of the columns. Temporary restraint brackets were used to tie the inner box frame to the concrete frame to maintain stability until the floating slabs were cast.

A careful checking process was undertaken by the project team and this ensured every temporary bolt was removed, as a single bolt crossing the cavity would compromise the required acoustic performance.

Interestingly, the school was not always going to be a steel framed structure, in fact it was initially conceived as a precast concrete solution.

“We undertook a value engineering exercise and changed the design to a more cost effective steel framed solution with masonry infill walls,” explains Matthew Colman, WSP Project Engineer. “Although the detailing of interfaces with the acoustic consultant was more challenging.” 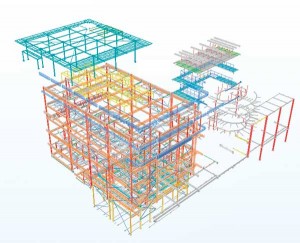 The main school structure is separated from the concrete residential tower by an atrium. Beyond this the lower levels of the tower also accommodate Guildhall facilities, primarily a 227-seat drama theatre.

William Hare has installed a number of steelwork elements into this area as well. Although the theatre is a concrete structure, steel forms the flytower and the cantilevering seating tiers.

Installing this steelwork required a lot of preplanning and coordination between William Hare and the concrete contractor. Construction of the residential tower was on-going, with the lower levels completed when the steelwork was inserted. As there was no tower crane available all of the steelwork had to be brought to site piece-small and hoisted into place with a chain and block.

Cast-in plates had been put in place during the concreting works, in readiness for the steel erection of the cantilevering seating tiers which hang from the theatre’s curved concrete walls.

“Planning was vital for this part of the project,” says Martin Sheward, Sir Robert McAlpine Project Manager. “We knew in advance that no crane would be available, so William Hare had to design the flytower so it could be brought in small transportable pieces.”

The project is scheduled for completion early in 2013.