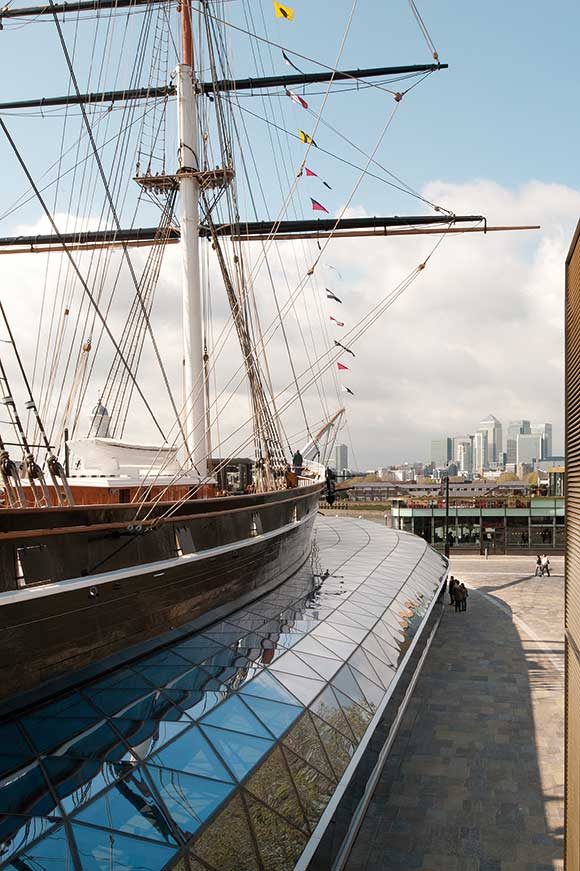 Rejoining the London skyline, the fully restored Cutty Sark has been opened to the public once again. Resting in a steel cradle, the vessel has been raised from the dock floor affording views of its sleek and revolutionary hull. Martin Cooper reports.

Cutty Sark is possibly Britain’s most valued maritime treasure, a ship that evokes the great days of sail and a time when the nation ruled the waves. The world’s last remaining tea clipper holds a unique place in many people’s hearts, especially the millions that have travelled to Greenwich down the years to visit it. 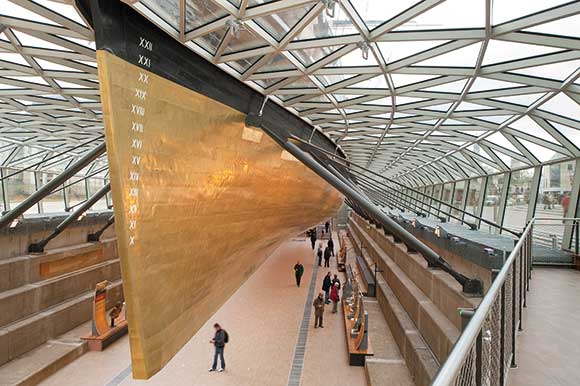 Since 2006 the ship has been closed to the public and undergoing restoration work. The project was delayed by a fire in 2007, a conflagration that was luckily not as bad as it first appeared. Part of the ongoing conservation work included removing much of the historical contents of the vessel and putting it into storage. Thanks to this and some heroic fire fighting, there was little damage caused to the ship’s original fabric.

Although the fire affected the progress of the conservation project the original plans were still viable. Work restarted with the help of an additional £25M from the Heritage Lottery Fund, and the culmination of six years hard work was rewarded when Her Majesty The Queen officially reopened Cutty Sark in April.

The relaunch marks the start of yet another exciting chapter in the extraordinary life of the three-masted clipper. The project succeeded in rescuing the Cutty Sark and preventing her collapse, while conserving as much of the ship’s original fabric from the period of her working life as possible.

1869 Built and launched at Dumbarton
1870 Undertakes first tea voyage to China
1877 Last consignment of tea taken from China to London
1878-82 Takes various cargoes to and from London, India, Japan, Singapore and the Philippines
1885 Sets record passage time of 73 days from Sydney to London
1895 Sold to Portuguese firm J. Ferriera and renamed
1922 Bought by Wilfred Dowman and renamed Cutty Sark. She is restored and moored at Falmouth
1938 Donated to Thames Nautical Training College and moored at Greenhythe, Kent
1951 Exhibited at Deptford as part of the Festival of Britain
1954 Floated into her dry dock at Greenwich and restored
1957 Opened to the public by HM The Queen
2006 Closes to the public for restoration
2007 Major fire on board the ship delays project
2012 HM The Queen reopens the Cutty Sark upon completion of the conservation project.

The conservation project’s centrepiece is a brilliant feat of engineering whereby the ship has been raised, via a steel cradle, 3.1m into the air, relieving the keel of the weight of the ship and preserving her shape.

Chris Nash, Grimshaw Project Architect, says: “The vessel had been sitting on wooden props and a concrete plinth on the bottom of the dry dock for 50 years. This wasn’t good for the hull which was bulging and would not have lasted much longer.” 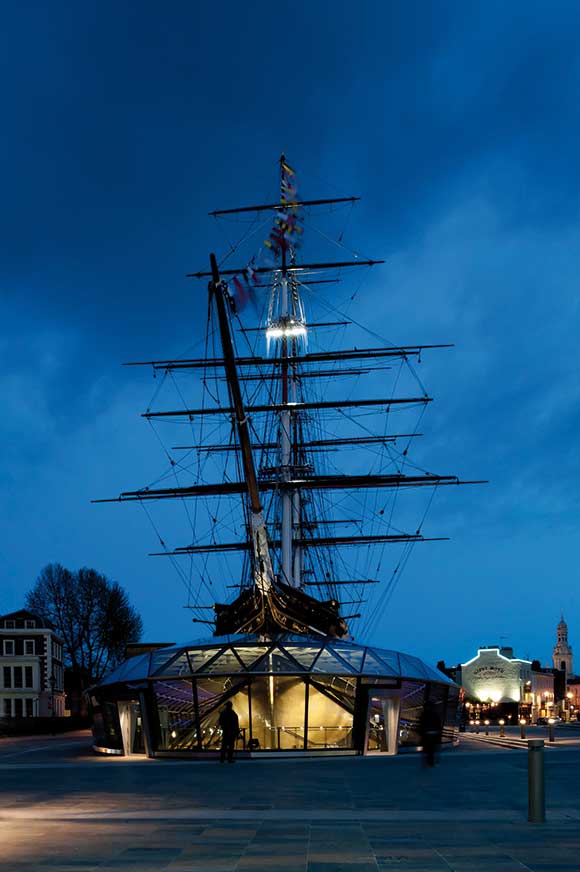 The restored vessel is once again a London landmark 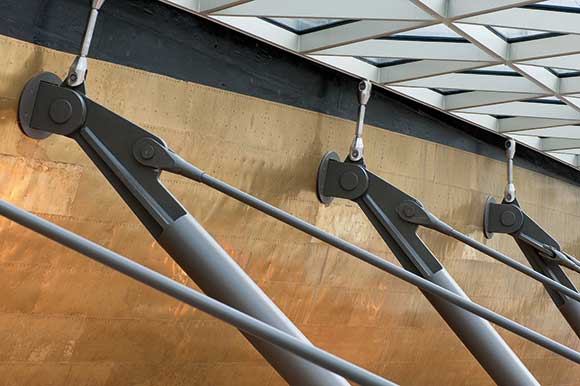 The design plan was to replicate the vessel sitting in water and to restore the sleek and unique shape of the hull. This has been achieved by strengthening the original ironwork and installing a steel cradle, a structure that also has the added benefit of allowing visitors to walk beneath the ship and view the elegant lines of her hull.

Launched in 1869 from Dumbarton, Scotland, Cutty Sark visited most major ports around the world. She carried cargo ranging from the finest teas to gunpowder, and from whisky to buffalo horns. Speed was what made her famous and she was the fastest ship of the era. The revolutionary and sleek hull design – now on view – was the secret of her success, enabling it to glide through the water.

The building of the support cradle has relied on steel construction as this was the only viable material for the job. S H Structures fabricated, supplied and erected around 200t of steelwork for the cradle which consists of 13 hanger frames.

The steel frames vary in shape and follow the geometry of the vessel. They consist of an internal beam that goes through the ship’s hull at the waterline and is then connected to the dry dock wall on either side by a CHS strut and a stabilising Macalloy bar.

Internally each of the frames is connected, via 64mm diameter Macalloy ties, to new keel strengthening plates. Running the length of the keel, these plates are 550mm deep and between 45mm and 35mm thick, depending on their location, and are placed either side of the original timber keel.

The hull has been strengthened with two 50mm thick × 500mm deep steel strake plates that run along both sides of the ship. The hanger frames sit above this and are connected across the ship by 12 compression beams.

The majority of the ship’s internal steelwork had to be completed prior to the lifting process. Raising a vessel, one which has not moved in half a century, 3.1m into the air, was obviously a very challenging part of the project and a major undertaking for S H Structures.

“Using a total of twenty-four 100t capacity climbing jacks, the ship was raised in 100mm bursts and lifted to its final height in three days,” explains Tim Kelly, Buro Happold Associate. “The initial lift was a little tense as the ship tore away quite a large chunk of the concrete plinth, but from then on, apart from some creaking, the lifting proceeded smoothly.” 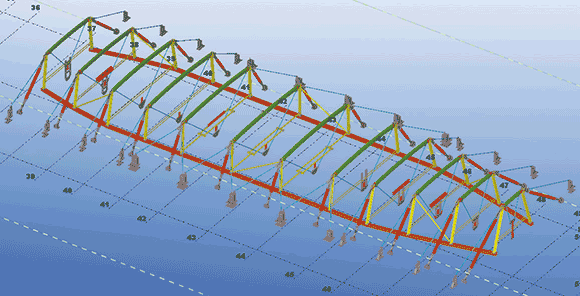 S H Structures had to design and build a temporary cradle for the lifting procedure. This consisted of a cranked beam on either side of the ship which was connected to the vessel at the same points as the external struts and ties which would eventually connect the ship back to the dry dock.

“After we’d lifted the ship the first 100mm we were able to weld a steel sole plate under the keel,” explains Mark Randerson, S H Structures Technical Director. “This completed the keel strengthening by connecting the two plates which had previously been positioned either side of the original woodwork.”

Once the Cutty Sark was 3.1m high, and with the cradle in place, the external steelwork was erected. On completion – with the new steelwork taking the ship’s loads – the temporary members were then lowered back down by jacks and dismantled.

Steelwork has also played an important role in other aspects of the ship’s preservation, with new base plates for the restored masts, and 150 new steel frames inserted to strengthen the corroded iron ribs. 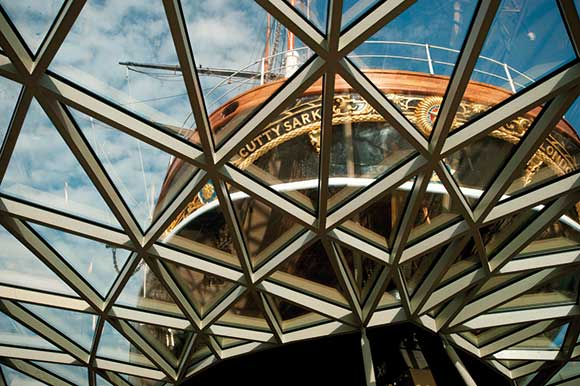 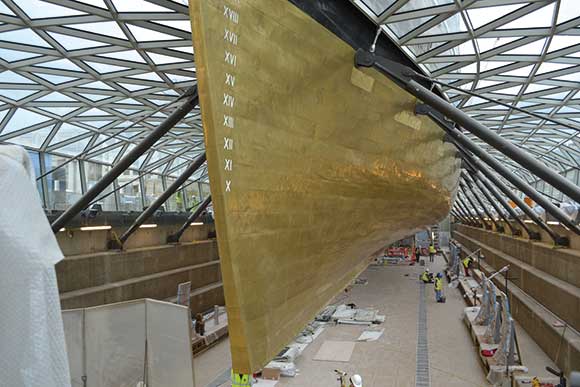 The space beneath the Cutty Sark is available for hire, generating revenue which will go toward the cost of the restoration project

By suspending the vessel the project has created a large open space beneath the ship, a space that has a glazed diagrid roof positioned just above the framework struts and ties, and consequently just above the waterline. The steel-framed diagrid roof is a separate steel structure and is connected to the dry dock and the vessel independently from the struts and Macalloy ties.

Lifting up the Cutty Sark has created a large open space under the ship at the bottom of the dock. This space now houses toilets, gift shops and permanent exhibitions, de-cluttering the ship as all of this was previously on board. This has improved the visitor experience by restoring views along the length of the ship.

The new glazed space has also created a revenue stream for the Cutty Sark Trust, as it can be rented out as a unique corporate venue.

“The client always realised that conservation was going to be an expensive job and we were initially approached to design something that would ultimately help pay for the work,” sums up Mr Nash.

By raising the Cutty Sark and creating the large open space for visitors and exhibitions, the project team have done just that. The venue will help the vessel with a sustainable future, generating funds to cover maintenance needs. And, importantly, they have also opened up the ship and allowed visitors new and exciting views of its keel.

How the Cutty Sark was lifted into position 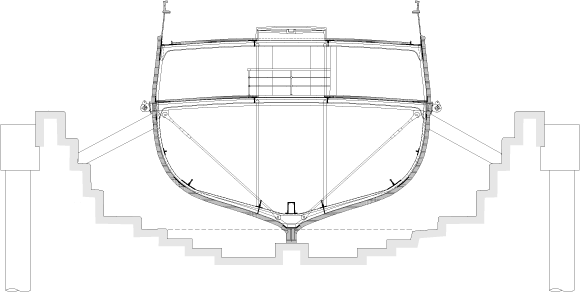 …and a temporary cradle is put in place. 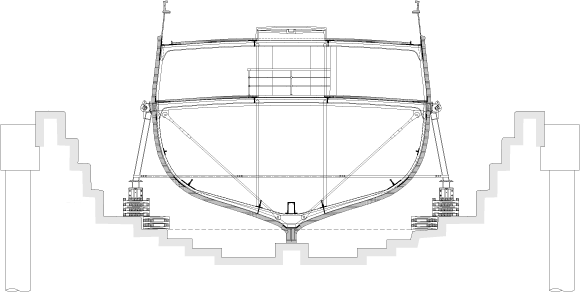 The vessel is jacked up incrementally… 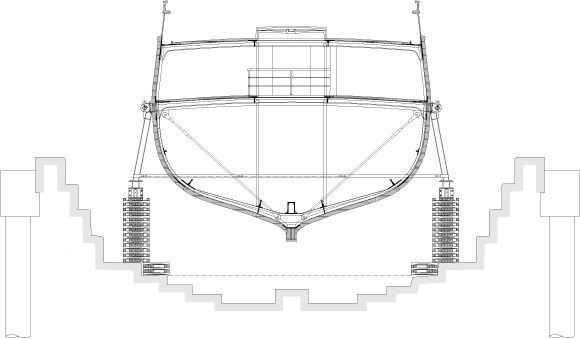 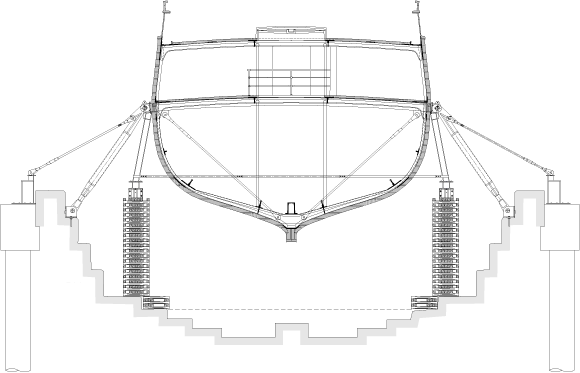 Once at its final height of 3.1m, the permanent cradle is installed connecting the ship to the dock. 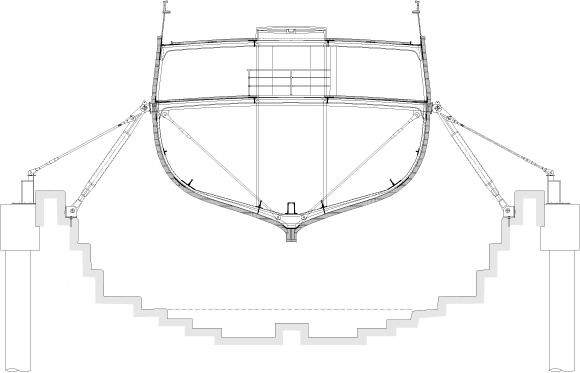 The temporary steelwork is removed and the job is complete.

The conservation work was a truly unique initiative and was complicated by the variety of materials. Steelwork was used to create walkways into the ship and also to replace the main deck.

Around the outside of the ship the hull planks were in need of varying degrees of repair and were removed to undergo carefully managed stages of detailed work. The planks vary in size and are curved to follow the ship’s shape. Once repaired they were refixed to the hull, using bolts recessed into the original holes of the planks.

the photos we couldn’t fit into the print edition. 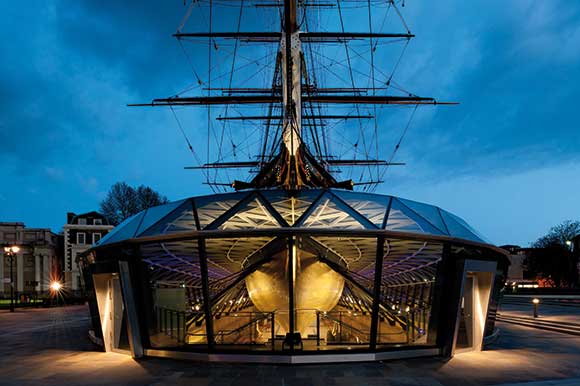 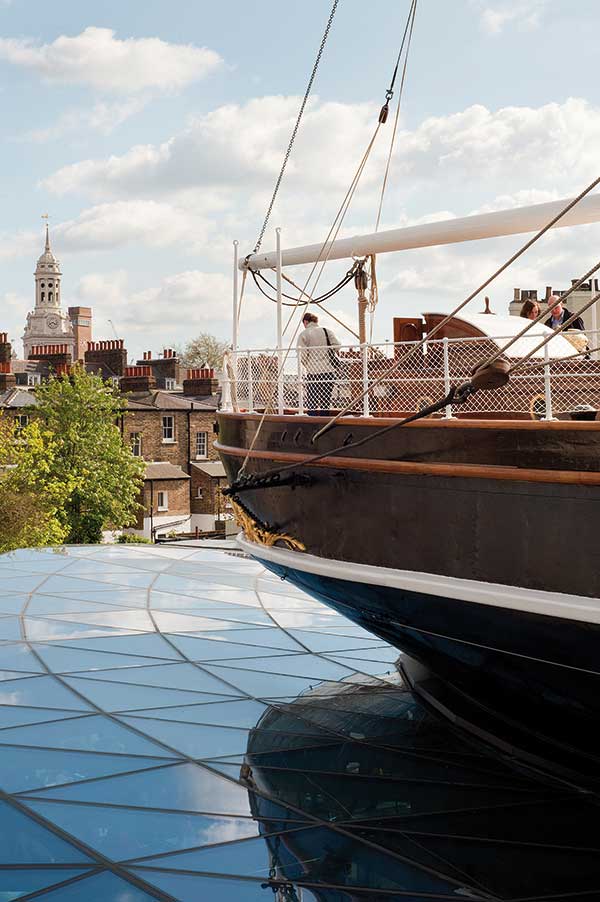 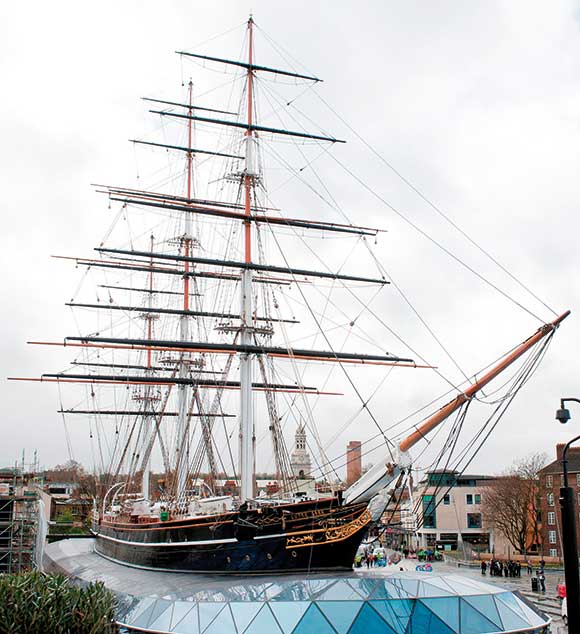 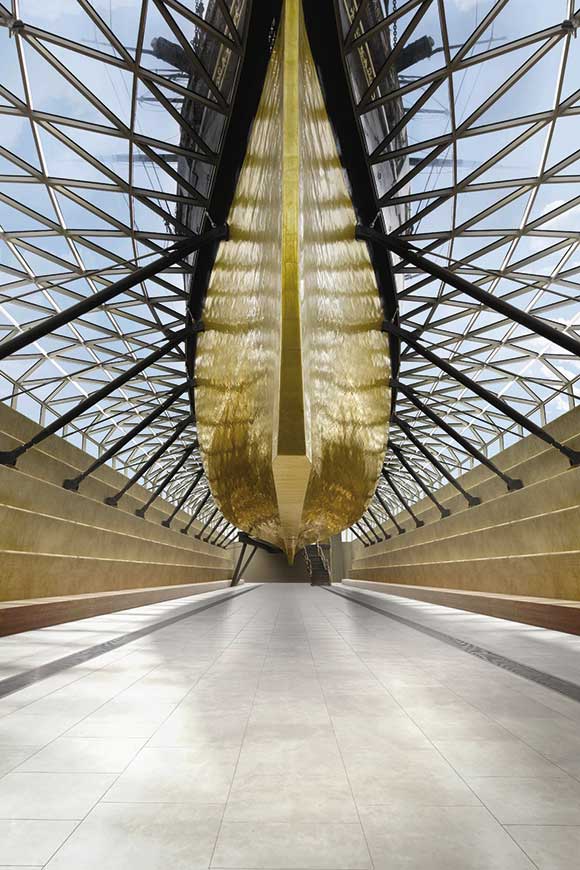 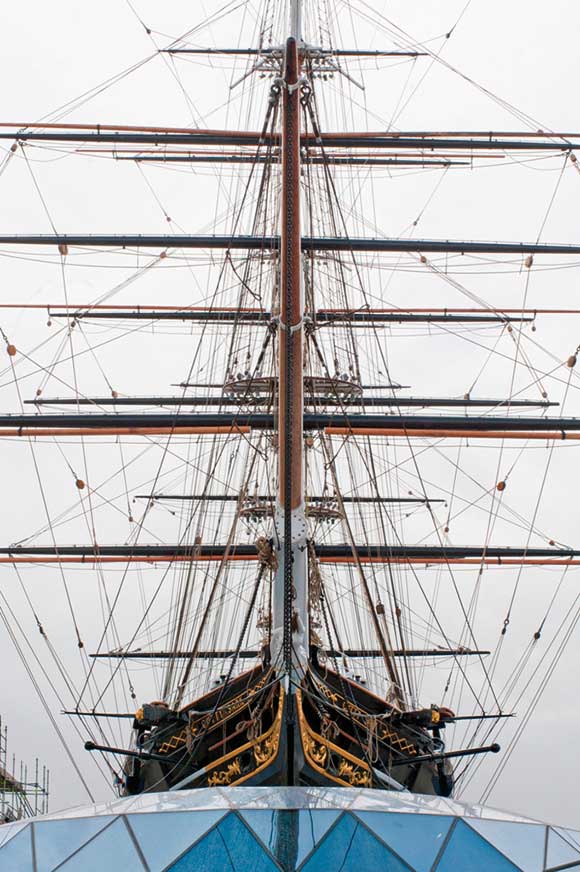