20 Years Ago: Building by technology – The National Gallery – Sainsbury Wing 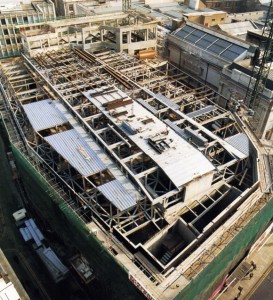 In March 1988 the Prince and Princess of Wales laid the foundation stone for the Sainsbury wing of the national Gallery, which will be connected by a bridge link to the gallery. The wing  has been financed entirely by the generosity of Lord Sainsbury, Timothy and Simon Sainsbury. The wing includes gallery space to house the Early Renaissance collection of Italian and Northern Works of the 14th and 15th centuries.

The architect, Robert Venturi of Venturi, Scott Brown and Associates of Philadelphia USA, won the competition for the design that provided light spacious galleries. This required a controlled level of natural filtered lighting via rooflights and also roof level services for the lighting, heating, air conditioning and safety check systems.

The steelwork design had to reflect the fineness and slimness of the design. The Building Regulations 1985 call for a structure on such a central London site to be constructed so that if clear spans exceed 9m, the structure would not be damaged disproportionately in the event of an accident: the effect is that any one column could be considered redundant, meaning the transfer beam would have to cover twice its normal span. Ove Arup’s design for the steelwork had to take into account these seemingly conflicting requirements.

Booth Steelwork Ltd., of Bolton, had completed a major reorganisation shortly before winning the steelwork contract, whereby direct numerical control machines have been installed for steelwork preparation. The dimensioning and marking out of steel in the works had previously been done by a combination of the individual skills of the workforce and a degree of automation. Subsequent to the major investment the dimensioning of sawing, notching and drilling of beams and columns became computer controlled functions. Fittings such as brackets and cleat plates are now cut to size by two further DNC machines handling flat plates and angle sections. 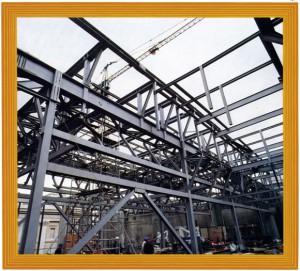 The design of the connections for the Wing required Booths to submit some 300 calculation sheets for the 1,550 pieces of steelwork, totalling 360 tonnes of fabricated steelwork. Computerised control of the steelwork processes sequentially orders the materials, fittings and the detailing and calling off of the production schedules, together with the paintwork and delivery to site.

During the early stages of work on site it was decided by the Sir Robert McAlpine construction team that the structural steel building sequence would be changed from east-west, across the front of the building, to building outwards from a north-south central spine. Booth was able to handle the changed data input and deliver the steel to site sequentially.

Robert Venturi’s aim was to solve every potential construction difficulty on paper, rather than on site. This would have been impossible without the power of many computers. The Sainsbury Wing to the National Gallery is a product of today’s world of computer generated design, control and fabrication.