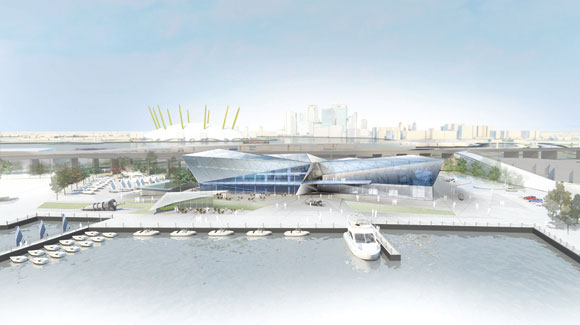 The design of the Siemens centre draws inspiration from its surroundings 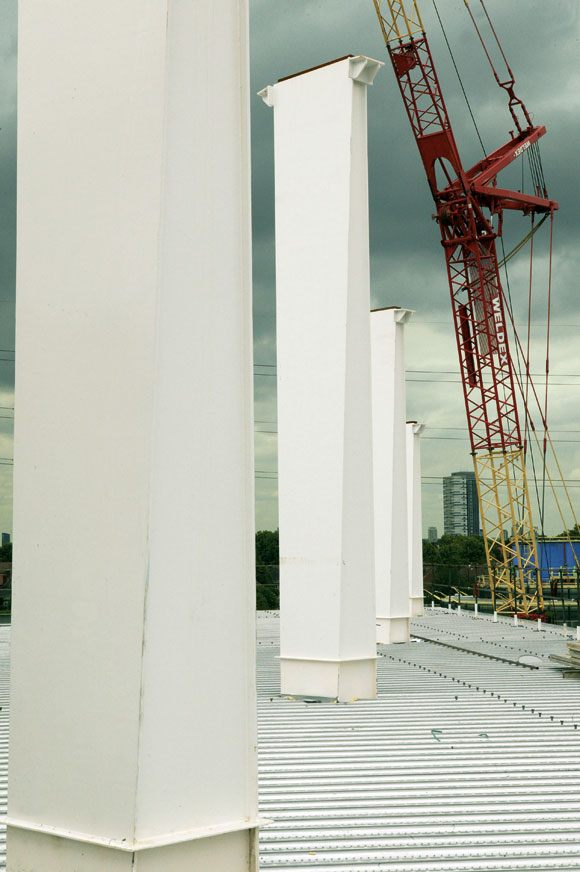 Siemens has chosen London as the location for its first sustainability centre, a flagship development that will present new technologies and host innovative exhibitions highlighting ways of living and working in a more environmentally friendly manner.

The idea is that interactive events, hosted by Siemens, will be open to the public. The company expects to attract around 100,000 visitors a year, with school groups using the facility for educational trips. The building will be the base for around 230 Siemens employees and provide the potential for around 50 new local jobs.

The ever-expanding Docklands area of London is the chosen location for the Siemens Urban Sustainability Centre, with the project currently rising up on the plot overlooking the Royal Victoria Dock, only a stone’s throw from the ExCeL exhibition centre.

Situated in an area where there are already a number of architecturally driven structures, the 7,002m²
Siemens building will not be easily overlooked or forgotten. The design is unique and based on two interlinked rock crystals bursting forth from the ground. As well as nature, the design draws inspiration from its waterside location and curvature of the nearby O2 arena.

Within one of the two crystalline shapes there will be a three level corporate zone, housing offices, a 300 seat auditorium, meeting rooms, and a cafe and restaurant. The other crystal form will accommodate an exhibition area, along with a shop, classrooms and plant areas. Both crystals are linked by a main entrance and street area, which will allow access into and between both of the main areas.

Structurally the design creates the internal spaces in each half or crystal with a series of portal frames, using tapering trapezoidal sections fabricated from steel plate sections. Each crystal is independently stable, with the corporate side gaining its stability from portal action in one direction. This part of the steel frame is propped laterally from the first and second floor office slabs and these distribute the horizontal loads via diaphragm action to concrete stair cores. 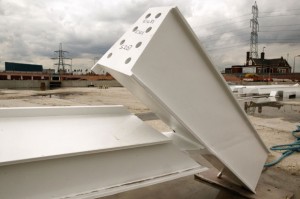 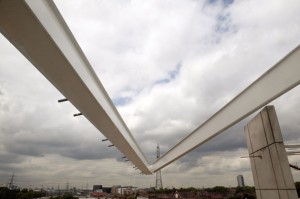 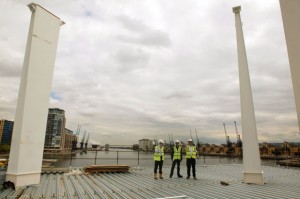 The completed building will offer views across London’s Royal Docks 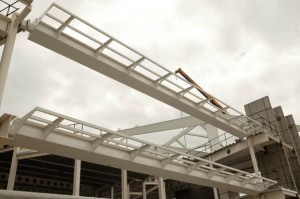 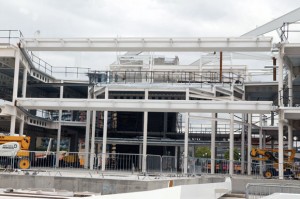 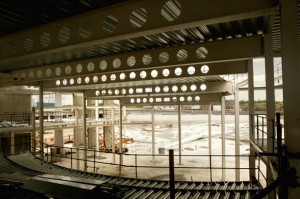 The exhibition crystal also relies on portal action for stability in one direction, and on the cantilevering action of the superstructure columns in the other.

“The design concept led to the decision to use structural steelwork,” says ISG Senior Project Manager Mike Jenner. “To achieve the project’s slenderness and get the detailing correct would have been extremely difficult with any other framing material.”

Steelwork contractor Rowecord Engineering has erected the structure from south to north, meaning the corporate crystal was completed before work began on the ‘street’ and then exhibition crystal.

The corporate crystal features two levels of open plan office space, wrapped around a ground floor auditorium. Cellular beams have been used to form all of the floor levels, with Rowecord’s own Rowebeam product debuting on the project.

“By using our own design for the cellular beams we were able to fabricate them in our own workshop so that we were in control of fabrication and managed a faster and more commercially competitive outcome.” explains Rowecord Contracts Manager Richard Cherrington.

To form the structure’s unique crystalline shape, many of the perimeter columns are cranked to follow the line of the glazing mullions. These columns are generally hollow section members, except those which will remain exposed within the completed structure, here the columns are fabricated trapezoidal members.

Chosen for their aesthetic appeal, the large trapezoidal columns were all fabricated from plate and brought to site by Rowecord fully welded. Each of the columns is 15m-high and has to absorb considerable loads from the overall structure, consequently they are held in place by large bolted base plates.

Rainwater drainpipes have been secreted within some of the hollow section columns, thus avoiding any unnecessary clutter within the structure. Rowecord had to split the columns in  half and insert the stainless steel pipes, and then weld the members back together again.

Another architectural highlight of the steelwork is the bespoke connection between the edge beams and their connecting columns. Giving the impression of a ‘floating’ connection, an internal tie is welded to the column, while the exterior of the member is left free.

In order to keep a clean and smooth appearance throughout the steel frame, the splice connections between columns and floor beams are hidden within the raised floor zone. The majority of the project’s connections are welded and in order to save time most of this has been completed off-site at Rowecord’s Newport facility. Where bolted connections have been used, they are also hidden.

“The exception to this has been the roof rafters, some of which are cranked and are much too long to bring to site in fully welded pieces,” says Mr Cherrington.

The cranked rafters are needed as each half of the structure has a double pitched roof. The roof’s longest rafter, connecting the south east corner of the building to the north west, is 72m long. Consequently, this rafter was brought to site in two sections and welded on site, prior to being lifted into place.

As well as a challenging and complex, highly sustainable structural steel frame, the Siemens centre will also boast a host of other sustainability features. The building design will maximise the use of natural daylight, incorporating high performance glazing, photovoltaic panels and energy efficient lighting.

Rainwater harvesting, ground source heat pumps and solar water heating will also be integral to the design, with the aim to build a facility that reaches the highest standards of sustainability possible.

Chris Brandon, Partner at Pringle Brandon says: “The Siemens centre will be an iconic visitor attraction and educational facility showcasing how sustainability can create better working environments over the next 10-20 years.”

Construction of the Siemens Urban Sustainability Centre will be complete by March 2012. 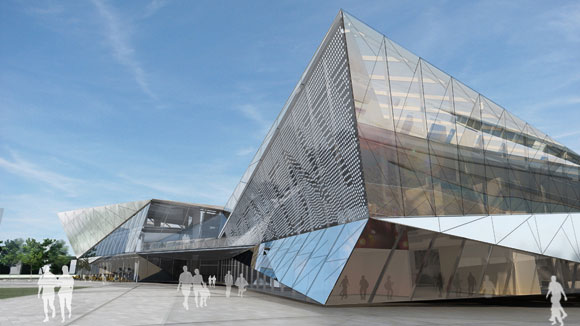 The building resembles two crystals bursting from the ground