Heart of glass and steel 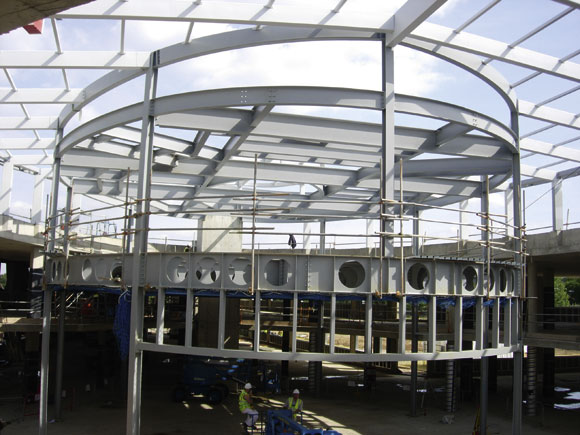 The Inclusion Unit, a special needs teaching pod, sits above the auditorium

A bespoke steel and glass atrium forms the central hub of a recently completed school in Harlow. NSC reports.

The context of Harlow, and of landscaped driven town planning, has strongly influenced the school’s sustainable and low impact concept. The overall structural design features five wings that radiate outwards (finger-like) from a central atrium or meeting point. The area provides a natural heart for the school and circulation routes from all of the wings lead into the zone.

This Essex County Council school will accommodate 1,200 students in what is primarily a two-storey radial design. The exceptions being one wing that features a sports hall and the atrium that houses, within its large double-height space, an auditorium with a specialist teaching level above. 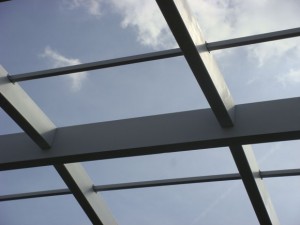 Overall the school features a hybrid design as the two-storey wing elements are concrete framed structures, except the sports hall which is timber framed. A third framing material – structural steelwork – has also played an integral role, namely in forming the school’s atrium.

The atrium is essentially an elliptically-shaped void, 16m at its widest, at the centre of the overall concrete structure. Within this void an elliptically-shaped auditorium sits at its heart, thus forming an ellipse within an ellipse. Above the auditorium there is a central special needs teaching pod, known as the Inclusion Unit. The roof of the void is spanned with a steel structure which is predominantly glazed, forming a feature element at the project’s heart.

The teaching unit has been deliberately placed above the auditorium and at the heart of the school in order to promote inclusiveness for pupils whose classrooms are in many other schools peripherally located.

“Overall the project has a hybrid design and the use of steelwork for the atrium was primarily driven by the long spans we wanted to have,” explains Michael Wright, AECOM Regional Director. “We then decided on using cellular beams for the central portion as these would accommodate the services and form the spans economically.”

Beyond this inner Westok box the outer ellipse roof is formed by a series of box sections radiating out from the inner cellular beams and connecting to a concrete ring beam that forms the perimeter to the surrounding concrete structure. 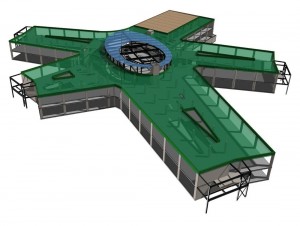 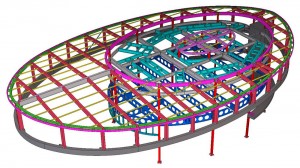 A close up of the steel ellipses 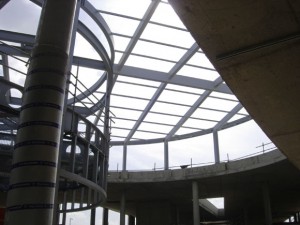 Light and airy, the glazed roof allows natural light into the school’s heart

A series of stub columns connected to the concrete ring beam and the upper extensions of the inner cellular columns, support the overall elliptically shaped roof.

English Architectural Glazing (EAG) were the subcontractor for the elliptical roof’s glazing, and in turn it contracted Adey Steel to undertake the steelwork fabrication and erection.

Designing the roof was very challenging, according to Neil Smith, Operations Director of Adey Steel. “Getting the geometry correct was especially challenging as it’s not just elliptically shaped, the roof also pitches by five degrees. It was essential to get the fabrication accurate to ensure we had no problems during the erection programme.”

In order to get this complex geometry right Adey Steel limited their design to just one radii per steel member wherever possible. “This made the fabrication process a little easier,” adds Mr Smith.

The outer ellipse of roof steelwork supports glazing that wraps around the smaller elliptical roof above the Inclusion Unit classroom. The glazing allows plenty of natural light to penetrate the atrium and circulation areas.

Breaking up the glazing, the inner ellipse, which is also the roof above the classroom, is decked and will support a plant area. Within this zone there is a third ellipse which accommodates a feature rooflight above the classroom.

Passmores has been recognised by Ofsted as Outstanding, by the Specialist Schools and Academies Trust as one of the top 100 performing specialist schools in the UK. All of which was achieved in its old accommodation.

Summing up the school’s new architecturally driven premises, Headmaster Vic Goddard said: “I am certain that we have created a building that will help us ‘improve upon our best’ by giving the Harlow community a building that is fit for purpose and most importantly safe and secure. 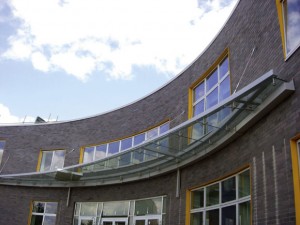 Other steelwork elements of the project include external steel staircases situated at the end of four of the wings and two walkways positioned around part of the double height open plan atrium.

With moveable partition walls at one end, it is envisaged that auditorium performances could break-out from the internal space and allow bigger audiences to attend by using the surrounding area, with the steel walkways then acting as balconies.

The school’s entrance also features a steel canopy (left) which is 8.5m long and 3.5m at its widest. Suspended from Macalloy rods, the steel and glazed canopy was delivered to site in one 2t piece, and according to Neil Smith of Adey Steel, it was the largest steel element delivered to site.