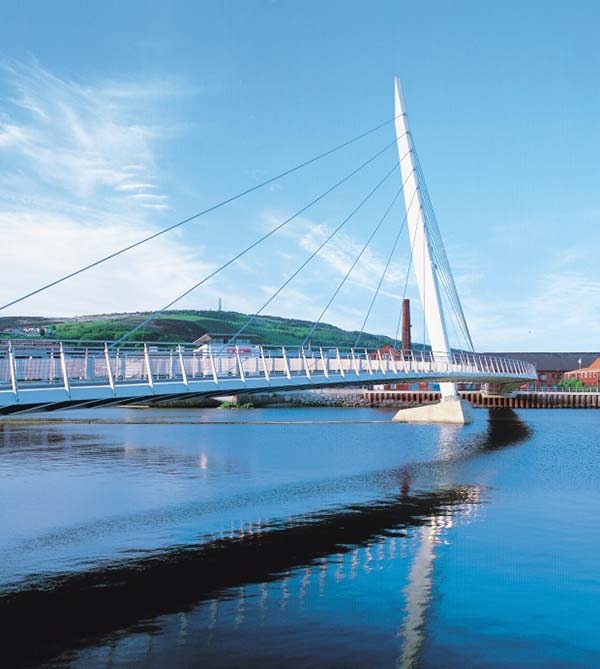 This project is part of a larger scheme comprising two bridges across the River Tawe with an additional opening span and associated Quayside walkways. The bridges connect the city centre with a publicly-funded redevelopment project currently under construction to the east of the city on the site of the Swansea Docks. The requirement for units in the redevelopment to be pre-let at an early date, with necessary infrastructure visibly in place, resulted in an unusually compressed programme – from design inception through to constructed completion in less than 15 months.

The 140m north bridge, named the “Sail Bridge” by the Welsh Development Agency, is an iconic design explicitly required by the client and city council to form an emblem for the regeneration of the Port of Swansea. Though the structure of the north bridge adopts a classic symmetric cable-stayed configuration, in cross section the deck is held along only one edge. The simplicity of the overall form is augmented by the apparent delicacy of the asymmetrically suspended walkway.

The 42m high mast, of varying cross section, is fabricated from a series of flat and rolled steel plates of decreasing thicknesses from base to tip. The cross section migrates from a filleted square at the base through to a kite shape at mid height, culminating in a triangular configuration at the tip. This developing form is achieved without the use of warped planes [all faces are ‘flat’] and yet the final form is visually complex. The plate thicknesses in the mast vary from a maximum of 45mm at the base to 10mm at the tip. The final craneage weight of the mast was 78 tonnes from an initial material procurement tonnage of 93 tonnes, and the mast was lifted in one piece using a 1200 ton crane on the west bank.

The project was procured using the NEC Target Cost Form with the specialist steelwork fabricator, Rowecord Engineering Ltd, appointed early on in the process. Very close co-operation between the design team and the specialist sub-contractor meant the highly modelled nature of the mast and the simplicity of the overall structural solution was retained through the design development to deliver an end product that is incredibly faithful to the original scheme design.

Furthermore, in terms of detailing, Rowecord was able to suggest fabrication methodologies that surpassed the design team’s expectations in terms of formal clarity and final surface finish. One good example of this is the sharp arris on the back of the mast from mid height to apex. Because of the extremely acute angle between the side plates, the design team had envisaged a shadow gap detail at the junction between the plates to lessen the visual impact of the welding. Rowecord suggested an alternative detail where a kite shaped bead of solid steel, running the full height of the intersection, formed the junction between the two plates. This allowed for a sharp edge as plates met and greatly simplified the welding details. 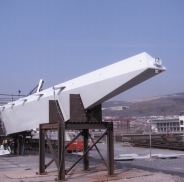 Steel is also used for the deck box sections and the cantilever ribs supporting the pedestrian walkway. The deck is suspended on one side by 70mm diameter spiral strand stay cables connected to the mast. As a result of the eccentric cable support, the deck is a closed steel box in order to provide the necessary torsional stiffness. The 20mm deck plate is stiffened longitudinally, but the 15mm webs and 20-30mm thick bottom flange are unstiffened to simplify fabrication and box assembly. The stay anchorages are formed from simple intersecting tubes designed to facilitate proper alignment because of the complex 3- dimensional geometry. The whole bridge was modelled by Rowecord as a 3-dimensional plate model to ensure correct geometry and control of tolerances, with the result that there were very few problems in the alignment and assembly of the units. Following the installation of the mast, the deck was lifted into position in nine individual lifts of approximately 20 tonnes each. This allowed for off site fabrication of individual deck units, transportation by road and rapid erection onto temporary piled supports in the river using craneage from both banks. This method enabled the correct geometry to be achieved prior to welding up the splices and stressing the stays to lift the deck off its temporary supports.

The bridge parapets differ between the vertical parapet to the cycleway and the inclined tension wire downstream parapet. This counterpoint between sides of the curved deck is accentuated by the more visually solid parapet infill panels and bespoke lighting units on the upstream side, which provide effective functional lighting for bridge users as well as subtle coloured lighting elements to viewers further upstream. The bridge mast is uplit to enhance the night-time visual impact.

The bridge was opened to the public for the inaugural ‘Great West Wales Triathlon’ in June 2003, and has already received warm public acclaim, becoming a popular icon for the region and destination in its own right as well as an essential link between the new Port Tawe Innovation Village and the City Centre.

This bridge, providing an essential link in the regeneration of Swansea, is a culmination of collaborative expertise and teamwork. Its architectural form, design and fabrication have all paid great attention to detail, to give the people of Swansea an exciting, simplistic, but visually complex structure to use and look at.