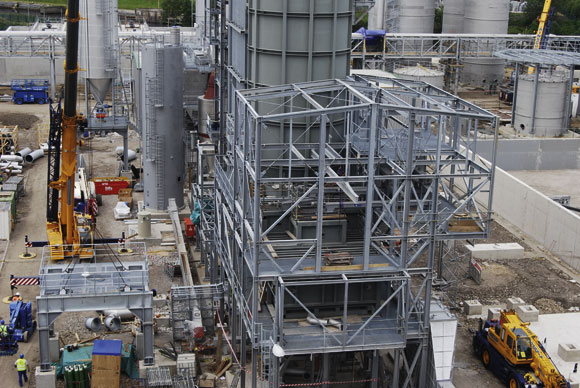 The entire project is reliant on numerous steel framed buildings

One of the UK’s most advanced recycled paper mills is taking shape on the outskirts of Manchester, a project which is reliant on its many steel framed buildings. Martin Cooper reports.

For the UK’s waste paper sector the facility will provide a much needed outlet for used material and a competitive UK-made final product will be available to the companies that use containerboard to package such diverse products as breakfast cereals, pizzas and desktop files.

The mill will house one of the world’s fastest board making machines and SAICA’s decision to make such a large investment in the UK is based on a number of reasons.

“The UK is short on production of containerboard, but has a stable consumption and good supplies of recovered paper,” explains Francisco Carilla, SAICA Director of Industrial Projects. 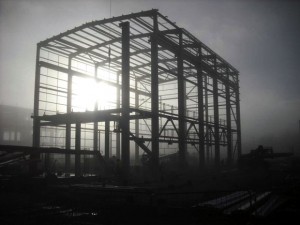 The turbine hall, one of the first structures to be completed

The project’s location also played a key role as Mr Carilla explains: “Partington has good access to motorway networks, there are large volumes of water as we are adjacent to the Manchester Ship Canal and raw materials can be easily sourced.”

The project’s building programme has been a boon to the UK construction sector during the recession as the majority of firms employed have been local. This includes the steelwork contractors (three in total) who have fabricated, supplied and erected the frames for the paper mill’s main structures.

Central to the construction of the mill is the main process building, a structure that will accommodate the paper making equipment. In short, baled recovered paper stored in an adjacent yard will be fed into the building, pulped and then turned into new product with the aid of steam-filled cylinders which dry the paper after its produced.

This process will take place in this large structure measuring 262m in length and 37m at its widest. It is 25m high and consists of two main levels; a ground floor housing hydraulic equipment and a first floor accommodating all of the process equipment.

The steelwork contractor for this large building is Atlas Ward Structures and it has erected 3,700t of structural steel for this one part of the project. The main perimeter columns spaced at 7.5m centres are all bespoke plate girders 1,000mm deep by 500mm wide, chosen because of the large loads they have to absorb. These columns support, at just below roof level, plated crane girders which run along each elevation to allow two 100t capacity overhead cranes to operate.

“Above the crane girder splices we were able to reduce the column sizes to 600mm deep rolled sections as there are far less loads being exerted,” explains Jim Martindale, Atlas Ward Deputy Managing Director.

Atlas Ward generally delivered the crane plate girders to site in 22.5m lengths, and these members are 1m deep by 600mm wide. All of the girder’s top flanges had to be butt welded to the beam web. “All of these welds were fully tested and the girders were engineered on site to a construction tolerance of +/-2mm at the crane girder supports, using a series of jacking and locking bolts,” says Mr Martindale.

When operational the processing equipment will also exert considerable loads and large floor beams support precast planks to form the first floor level. Running the length of one elevation, the building also incorporates a high level mezzanine floor which houses ventilation equipment, while the building’s front elevation has attached four-storey office pods and a workshop. 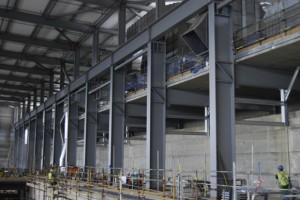 Because of the high humidity levels the building will experience, there are no cold formed members in this building. Consequently, even the purlins are hot rolled members.

Linked to the process building via a bridge is a large portal framed warehouse, built and designed by Elland Steel Structures. Here the reels of newly produced paper will be held ahead of dispatch to customers.

Covering an area of some 9,200m², the main part of the 165m-long warehouse features 44.5m spans, as a large open plan area is required for the huge amount of paper which will be temporarily stored in the building. It has been estimated the mill will produce in the region of 200 miles of 7.5m wide paper every 3.5 hours. A smaller lean-to section of the warehouse is 75m long and features smaller spans of 25m.

This is not the only part of the project undertaken by Elland Steel, as the company has also constructed two other portal crane structures, one a turbine hall/auxiliary building for the site’s electricity power plant, and the other a dewatering facility.

The turbine hall is a ‘beefed up’ portal frame, using slightly larger member sizes than normal as it supports a large internal overhead crane. The 16m high building has two floors and also incorporates an attached two-level electrical annex.

Paper manufacturing by its very nature causes a very harsh and moist atmosphere in the processing areas. This meant Elland had to take special care when applying paint to the steelwork destined for the dewatering plant.

“Because of the humid environment, in some areas of this building we had to apply paint to a thickness of 270 microns, which is triple what we’d normally apply in-house,” explains Mr Shorrocks.

Connecting many of the site’s structures are an array of pipe bridges carrying all of the facilities utility connections. All of these structures are steel framed as are a number of smaller auxiliary warehouses dotted around the project.

“All of the steelwork contractors working on site have met their deadlines and contributed to the project meeting its overall target of producting its first containerboard early next year,” sums up Jan-Olof Strindlund, SAICA Senior Civil Manager. 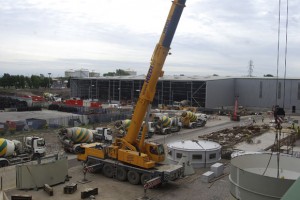 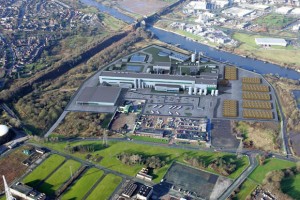