Striking a chord with bridges 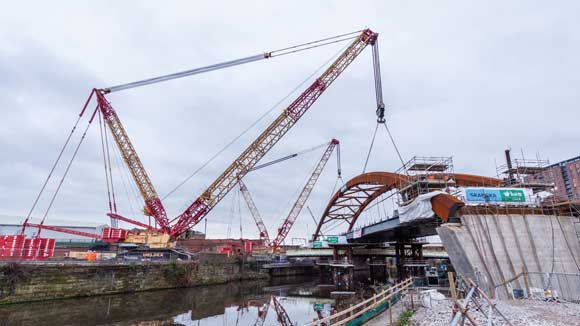 Nine steel bridges are required for the Ordsall Chord rail project, which will link all of Manchester’s main stations for the first time. Martin Cooper reports.

Once completed, the Ordsall Chord will also provide increased capacity, more frequent trains and less congestion at these main stations.

In order to complete this new track a huge amount of work is being undertaken. This includes the realigning of existing railway lines, building new bridges, removing disused arches and restoring Grade 1 listed structures. 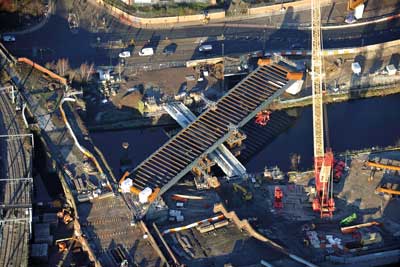 The deck of the Irwell Crossing was completed first 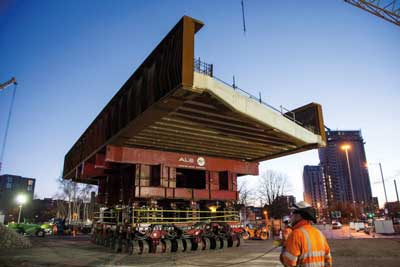 These two adjacent structures, which cross Water Street and are positioned at the western end of the Chord, consist of a 20m span replacement bridge for the Manchester to Bolton line as well as a 32m span bridge for the new rail line.

The bridges, which have steel tonnages of 185t and 266t respectively, were both fully assembled in a nearby compound. Severfield assembled the steel bridges on temporary trestles to enable other trades, such as concrete and decking, to complete their works.

The fully completed structures were then carefully manouvered from the compounds to their final locations using Self-Propelled Modular Transporters (SPMTs). Both bridges were installed within a 24-hour period.

Also during 2016, the new Prince’s Footbridge was installed. This central spine box girder structure has cantilever walkways and measures 49.5m-long × 7m-wide, with an overall steel tonnage of 82t. It was assembled in a compound and lifted onto its piers using one 750t-capacity crawler crane.

Getting the footbridge installed was important as it then allowed the team to begin work on the project’s centrepiece bridge – the Irwell Crossing. This 90m-long arch bridge is set at a skew and spans over the footbridge as it crosses the river.

Describing the design of this structure, BDP Lead Architect Peter Jenkins says: “The flowing ribbon form of this dramatic new railway bridge for the Ordsall Chord is intended to both complement and contrast with the buildings around.

“It is the first asymmetric network arch in the world, a choice of structural concept we developed with the engineers with the intention of the bridge tapering to a fine point where it approaches the adjacent historic Stephenson’s Bridge.

Another key driver for the choice of the network arch concept was its ability to create the smooth, unifying form of the steel ‘ribbon’ where it meets other steel structures on the west bank of the river.” 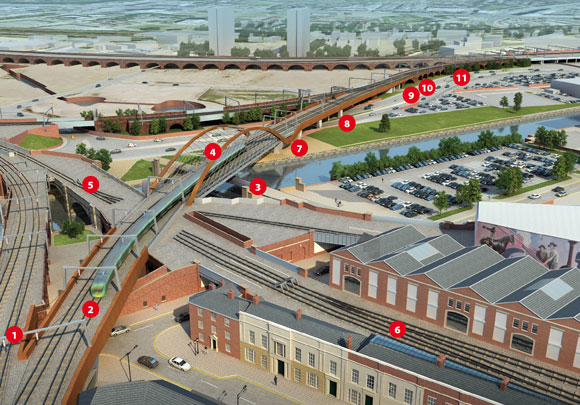 The Irwell Crossing is also the first network arch bridge, let alone asymmetric, of any kind in the UK. The network design, so called as the hangers crisscross in a network pattern, was chosen as it is said to provide a more efficient and stiffer structure as the loads are spread more evenly.

Initially the steel composite deck was installed across the river and over the footbridge on temporary trestles, while on an adjacent compound located on the eastern river bank, the two asymmetric arch members were fully assembled.

“Installing the deck and assembling the arches separately was done to speed up the construction programme and make the erection process safer by lessening the amount of work needed to be carried out over the water,” explains Severfield Project Manager Jarrod Hulme.

The two arches were initially assembled on site from 12 weathering steel sections (six each side). Laid out flat they were both rotated into a vertical position after welding and placed on to temporary supports to allow the cross members to be installed.

Weighing 600t, the arches were picked up and installed with a tandem lift using a 750t-capacity crawler crane in conjunction with a 1,350t-capacity crawler. They were then landed on to four bridge positions, only one of which is over the River Irwell.

Giving the bridge its asymmetric design, the arch sections taper from 750mm-deep members on the eastern riverbank up to 2.4m-deep on the western bank.

The next steel structure on the western bank of the Irwell is the 112m-long Trinity Way Viaduct, a three-span structure that crosses the busy A6042 dual carriageway.

This structure was installed in pieces of up to 20m-long and weighing up to 60t each. A number of road closures and traffic diversions were necessary as the bridge was gradually installed east to west.

The thickest end of the Irwell Crossing’s tapering steelwork design is intended to match the Trinity Way Viaduct’s 3m-deep girders.

However, making sure the steelwork from the arch bridge seamlessly blends into the viaduct’s steel, there will be an architectural steel element installed between the two structures.

Known as the ‘Swoosh’ this intermediate element consists of two separate weathering steel sections that will be installed onto a concrete abutment between the arch and viaduct. This will then give the impression of one long continuous steel structure.

Each weighing up to 40t, the two pieces represent the most complicated steel sections on the project. Both ‘Swoosh’ pieces curve in two directions and have a tapering cross section which requires various sized stiffeners.

Further eastwards from the Trinity Way Viaduct there are three more steel bridge structures for the Ordsall Chord. Two filler beam bridges are known as the Stanley Street Bridge and DSE146 Span 19. They have spans of 15m and 20m respectively.

Relatively short and spanning over pedestrian areas, there is no headroom issue for these structures. Consequently, simple deck designs formed with pairs of braced plate girders were the solution.

Close to where the new railway link meets the existing lines that leave and enter Victoria Station, the ninth bridge known as Chapel Street is located. This structure required approximately 265t of steel and was erected over the Easter holidays.

Summing up, AECOM Mott MacDonald JV Engineering Manager, Brian Duguid says: “Steel was chosen for the nine bridges because of the long spans of the structures and because the material offered the most efficient solution.

“Weathering steel was used for most of the bridges as it is durable, needs no maintenance or painting, is relatively cost-efficient and is similar in colour and texture to the existing listed structures.”