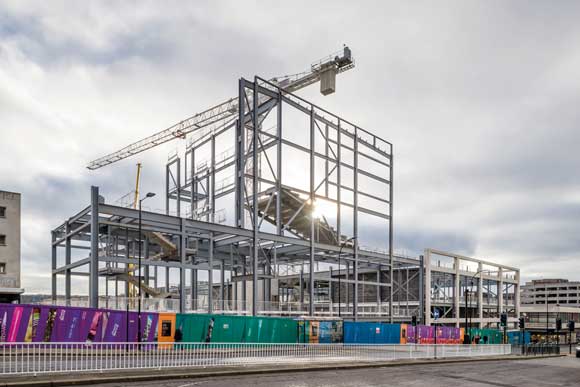 The cinema structure begins to be erected

The regeneration of Sheffield city centre’s main shopping area is on going with steel construction playing a pivotal role.

In an effort to reverse this trend, Aberdeen Property Trust and Sheffield City Council have embarked on an ambitious programme of regeneration that will transform the area into one of the city’s most desirable shopping areas.

Phase one of this programme centred around the completion of a new indoor Moor Market and nine retail units, while the current phase two – which kicked off in early 2015  – will deliver a three-level Primark store, a nine-screen cinema complex, restaurants and retail units all serviced by a large delivery yard.

Further phases are scheduled to begin later this year with more retail space in both new and refurbished buildings.

Phase two is essentially split into two structurally independent steel-framed buildings, separated by a 70mm wide movement joint. One building is a stand alone Primark store, while the other much larger structure accommodates the remainder of the scheme’s amenities

Main contractor Bowmer & Kirkland started phase two last March (2015) and as the site had previously been cleared the first task was to install foundations.

“Ground conditions have been more challenging than we initially anticipated, so we’ve had to reschedule the steel programme accordingly,” says Bowmer & Kirkland Project Manager Keith Birtwistle. 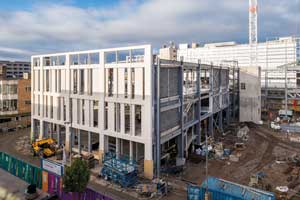 The Primark store was first to be erected 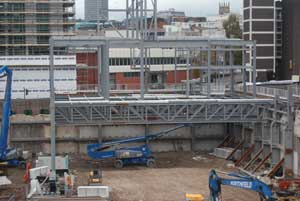 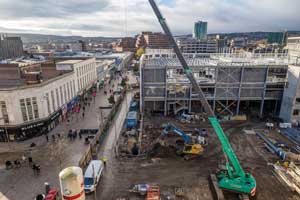 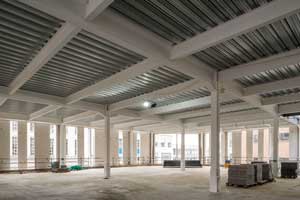 “It would have been easier, in terms of logistics and getting materials onto site, to erect the larger frame first and finish the steel erection with the Primark store,” he adds.

“However, as groundworks were ongoing, we had to do the reverse and erect the Primark store first.”

Since the Primark store has been erected site access for steelwork has been more challenging as the erected frame now blocks one of the previous entry points.

This means steelwork contractor Hambleton Steel has to make deliveries during early mornings and evenings, as these are the only times when the pedestrianised Moor shopping street can be closed. Meanwhile, larger steel elements are delivered via Debenhams’ adjacent temporary service yard, which overlooks the site.

Debenhams has a vested interest in the project as the site’s neighbour. Once the development is complete, it will be able to dispense with the temporary yard and once again use its main loading bays, which will be accessed via the delivery yard.

The three-level Primark store was constructed around a fairly typical retail sized grid pattern of 8m × 8m. There are a few slight variations to this pattern, most notably around lift and stair cores, and in order to accommodate the ground floor access ramp to the development’s delivery yard.

“The building has glazed shop front elevations which aren’t suitable for bracing as the client didn’t want them in view, so we could only position supplementary cross bracings in discreet back-of-house locations.”

The building’s suspended floors and plant roof are designed to act compositely with the supporting steelwork beams, via shear studs, welded to the beam flanges.

One of the most challenging parts of the steel programme was the initial phase of the large mixed-use structure. A total of eleven 26m-long × 2.5m-deep trusses had to be installed to form the large column-free space of the delivery yard.

To complete the yard’s roof, there are a further seven shorter trusses positioned at a 45 degree angle to the larger members.

The trusses vary in weight considerably, with the lightest being only 7t and the heaviest coming in at 39t.

“Their weight depends on their position and the amount of column loadings they are going to absorb,” explains Hambleton Steel Site Manager Andrew Aykroyd.

The loadings differ as the steel complexity increases above the service yard trusses. This is because, as well as forming the roof over the yard, the trusses also provide support to a host of columns forming the upper storey mall and the cinema.

In addition, a number of columns are offset to allow for clear access to a sloping second floor pedestrian walkthrough mall. Therefore a series of transfer beams within the third floor structure have been utilised to support the cinema floor over the service yard.

Access to the cinema, restaurants and first floor shopping mall will be via an escalator link from The Moor.

Further trusses are located above the auditoria, including a 17t 24m-long truss that will be installed at roof level. Also at this level are a series of 30m-long rafters forming the mono-pitch roof.

For ease of transportation, these long sections, each weighing 2.5t each, will be brought to site in three pieces.

The service yard trusses, on the other hand, arrive on site in two pieces, which are then bolted together on the ground before being lifted into place using two mobile cranes.

The Moor phase two is due to be completed this October 2016. 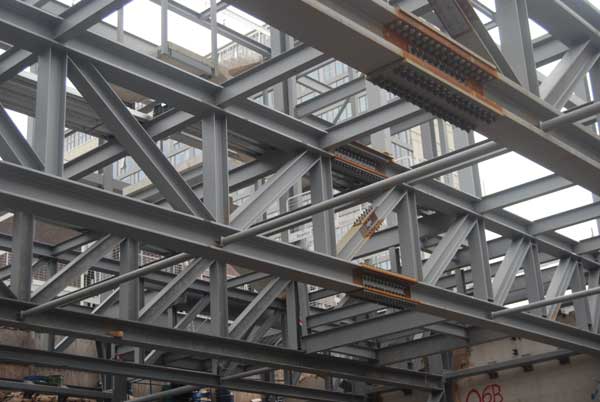 Truss design always demands careful consideration – but especially so for the large span, heavily loaded trusses used in the Sheffield Moor retail development. Practical issues of joint design, transportation, erection and deflection may all have an influence on the design of the truss and selection of members. For heavily loaded transfer trusses, a ‘Warren’ or ‘Pratt’ truss are the likely solutions. At Sheffield a ‘Pratt’ truss was adopted, which has the advantage of shorter compression internals (the verticals) but more internal members (and more joints) than a ‘Warren’ truss. Trusses may be analysed assuming pinned joints (which would generally be recommended) or as an entirely rigid assembly. Rigid joints may help reduce deflection but can complicate joint design. A further solution is pinned internals and continuous chords. Analysis is usually based on centre lines meeting at nodes – though moving the intersection point to produce more appropriate joint details is always worth considering. The additional forces and moments that result from the eccentricity can be considered as part of the initial design. A key design consideration is out of plane restraint to the chords – generally the top chord has appropriate restraint, but reversal that causes compression in the bottom chord must be carefully considered and restraints provided.

Joint design is critical, which makes judicious choice of truss members essential, with a review of joint configuration part of the design process. Open sections have approximately 40% of the axial load concentrated in each flange, so the transfer of these forces is likely to lead to heavily strengthened joints. The science of the joint designer is to consider how these forces are transferred between members, especially when at the joints the load-carrying elements (i.e. the flanges) are often perpendicular to each other.

Bolted joints are common in more lightly loaded trusses, but become increasingly complicated for heavily loaded joints between open sections. Connections with ordinary bolts also have the potential of movement as the clearance is taken up and bolts slip into bearing, leading to unwelcome deflection of the truss. If bolts are to be used at all, pre-loaded assemblies are strongly recommended. In the Sheffield Moor retail development, the trusses have welded joints. The necessary splices between sections of truss use pre-loaded assemblies, to ensure there is no slip.

The effect of deflection on the supported structure must be carefully considered; the supporting truss will undoubtedly deflect as steelwork is erected and load (such as floor slabs) added. In the Sheffield Moor retail development, the trusses were precambered, and the subsequent construction sequence carefully arranged to minimise movement of concrete floor slabs.