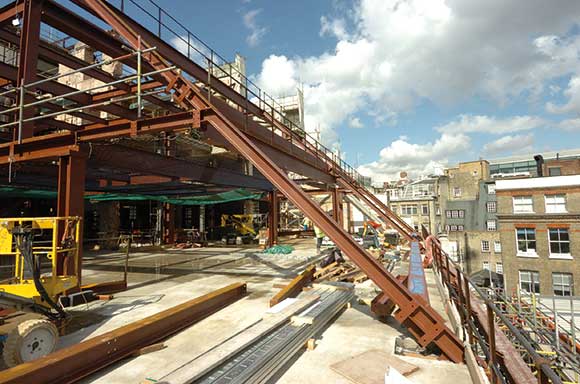 Retained façades and original steel framework have been incorporated into a new and enlarged modern and reconstructed office building in London. Martin Cooper reports on a project where steel construction has played a delicate balancing act between new build and listed structures.

Built in 1921, Africa House is a Grade II listed commercial building on Kingsway in central London. Positioned as it is in a prime location, the structure, like many of its contemporaries, has remained in use throughout its lifetime, serving as a headquarters for numerous companies.

Early twentieth century interiors however are not conducive to modern working practices, and in order to bring Africa House into the present era an extensive reconstruction programme is underway. 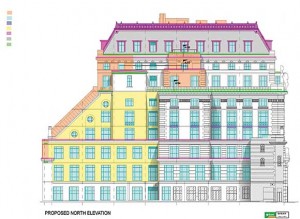 How the reconstructed Africa House will look along its north elevation

Retaining the majority of its Portland stone façades, including the double height fluted screen and arch which fronts Kingsway, the building is being stripped entirely apart from its listed areas.

The rebuilt Africa House will include a new traditional two storey mansard roof (incorporating one new extra floor of offices with a plant area above on the ninth level); the insertion of a new contemporary core infilling the rear lightwells, and the rebuilding and extension of the rear of the building, behind a sloping curtain walling façade.

The main front façade and the floors adjoining to a depth of 15m, are being retained. Beyond this point the majority of the original innards have been demolished, with a new steel frame being inserted, creating a modern open plan office environment. However, other original elements of Africa House are remaining in place, such as a listed main staircase, which is situated near to the main Kingsway entrance.

To open up and create larger access points to the staircase, steelwork has been inserted into the original retained walls. A series of steel goal posts, forming large openings, have been erected on each level above first storey.

Beyond the retained staircase a lightwell is being converted into an atrium, featuring a scenic lift; two more conventional style lifts will be located close by in a new core.

Just to make things a little more complex, the construction programme is also being carried out while retail tenants, who occupy parts of the ground floor, continue to trade.  This means much of the ground floor level has remained untouched and the new second floor has been asphalt covered, keeping the retained areas below watertight. “Projects of this nature in central London have been my bread and butter for many years,” commented Bob Wright, Project Director from the client’s project manager Parsons Brinckerhoff, “but this reconstruction is as complex of any of them.”

All of this structurally challenging work will increase the building’s gross floor area to 15,000m2, while upgrading it to a BREEAM ‘Excellent’ project.

The new steelwork frame forms a T-shape, with the upright part of the letter stretching backwards from the staircase and the horizontal line of the T forming the new rear tiered façade. 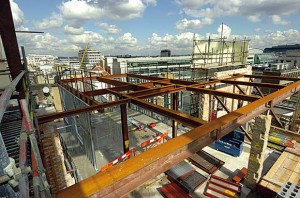 New steelwork is being incorporated into the existing and retained structure

Prior to installing any new steel a considerable amount of temporary steelwork had to be used in order to stabilise the remaining old steel frame after demolition had been concluded. Congesting an already tight and busy site, props to the retained façades and slabs were also positioned inside the project’s footprint, as well as bridging beams above the ground floor retail outlets.

“The design of the new structure is a large balancing act,” explains Bob Taank, Director at Structural Engineer Taylor Whalley Spyra. “We had to make sure the new extra loadings from the steel frame would not overload the façades and the retained areas of the ground floor. We were continually trying to match the new loads with the original loads.”

Luckily during pre-construction surveys it was concluded the building’s substantial masonry façades would be able to absorb extra loadings, and this was also the case in many parts of the retained ground floor where masonry piers were sufficiently robust to accept new loadings from above.

However, this was not the case in other areas, particularly the rear elevation which has been retained up to the second floor. This façade includes a series of brick piers which could not support a new steel frame to be erected above.

“We had to install steel spreader beams between the piers so the new steel frame’s loads are absorbed by a number of retained columns,” says Mr Taank. “This configuration continues up to fifth floor level, where the new façade steps in.”

The rear elevation’s two slopes are glazed, and this lightweight material lessened the extra loadings.

“We also maintained thin floor slabs, in keeping with the existing building,” points out Mr Taank. “This also reduced loadings.”

This balancing act also came into play while designing the new eighth (extra) floor for the building and the rooftop plant zone. Africa House’s entire original roof was removed and the new two-level mansard levels are being erected in its place. Loads from this area are transferred to a combination of the retained façades, the new steel frame and some concrete piers – lower down the structure – via the spreader beams.

Erecting a new steel frame and connecting it into an existing one, albeit one that is 90 years old, will always throw up interesting and unique challenges. However, the building’s retained steelwork, much of it encased in concrete (possibly for fire protection), has stood the test of time, remaining in good condition and this has aided the connections and erection of the new frame.

The new and enhanced Africa House is due for completion in spring 2013. 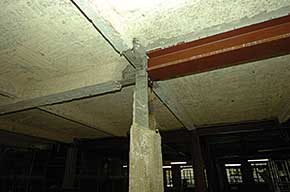 New steelwork connects to existing steelwork in many locations

Once it was completed in 1921, Africa House filled the last vacant plot remaining on the recently constructed Kingsway thoroughfare. Architect for the project was Trehearne & Norman and they chose the building’s hybrid masonry/steel frame design. This design maximised steel’s lightweight construction and ease of erection (even in the labour intensive early twentieth century) for the building’s innards, while masonry was used for the elevations to fit with the structure’s neighboring buildings. Engineers for the original project were Berrycroft of London, while the steelwork contractor was Edward Webb of Manchester, a company sadly no longer in existence. Some of the steelwork was supplied or bought from Dorman Long; its name is stamped on many of the retained girders.