40 Years Ago – Bridge travels from Glasgow to London

Off loading at Harpenden station onto a heavy duty road tractor

Motorists eagerly await the completion of the M1 Southern Extension which will give much greater significance to the Motorway so far as the Capital is concerned.

The Hertfordshire Council is responsible for 3 miles of this extension, acting as Agents for the Ministry of Transport. This work is under the direction of the County Surveyor of Hertfordshire, John V. Leigh, M.B.E., B.Sc., M.I.C.E., M.I.Mun.E.

A total of 18 bridges is to be built on the extension and of these No. 16 is of particular interest not only for the steel girders used – the longest being 135 ft. – but also because it has been possible, by a well co-ordinated programme of expert transportation, to convey the girders the whole way from fabricating shop to site in one piece and place them in position with military precision and timing. 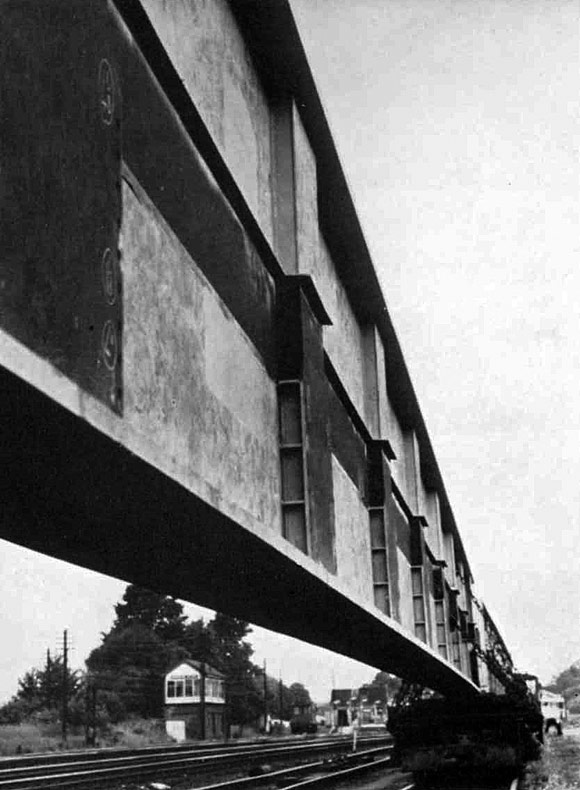 The girders travelling by rail

The M1 extension is being carried across the A411 by bridge No. 16 which is 121 ft. wide, skewed at 42º (clear skew span 121 ft. 7 in.). Construction is of hollow box steel girders with welded stud shear connectors at 9-foot centres with a concrete 9-inch deep slab acting compositely. The girders are placed square to the abutments and are trimmed by welded steel plate girders 8 ft. 3 in. deep, which also serve as parapets. Indeed, a principal feature of the bridge is the trimming girders: they are not found in any of the remaining bridges. Total weight of steelwork is 288 tons, of which 236 tons are to B.S.968:1962.

All steelwork was fabricated in Glasgow. The actual transportation of the steelwork to the site entailed the moving of 27 girders. 25 of them ranging from 19 to 96 ft. presented no difficulty at all, but the remaining two parapet girders, 135 ft. long, 8 ft. 4 in. deep and weighing 40 tons a piece, raised several problems.

Consultations between the main contractors, the steel fabricators and British Rail produced a detailed plan of action, sending the girders by train from Glasgow to Harpenden Central station, and then by road to the site.

The two main girders left Glasgow by train early in the week preceding the agreed installation date: the journey took three days as the girders could not be moved in high winds. The remaining girders followed a day behind.

Delivery to the site began according the schedule at midday on Friday; the girders were loaded in correct sequence, the smaller ones between the larger sizes. Thanks to the special arrangements made with the police and careful route reconnaissance and timing, the numerous journeys were all completed without any major hitch and the entire operation was completed during the Saturday and Sunday.

The site erection period had been determined as being 59 hours in toto and continuous working was required under both natural and artificial lighting. Feeding of girders for erection had been planned and regulated in association with the rest of the operation. A 100-ton mobile crane was used to lift the parapet girders and certain of the deck beams. For the lighter sub-girders a 25-ton mobile crane was used.

The ability to fabricate and transport complete units of such magnitude, combined with the use of high yield stress steel, ensuring minimum weight and maximum strength provides yet another illustration of the extraordinary flexibility and strength of steel as a structural medium.