Structural steelwork is playing a starring role in the construction of a new performance venue in Doncaster.

Big changes are afoot in Doncaster town centre as a landmark £300M development programme takes shape over the next six to eight years. To be delivered in four stages, the grand scheme will cover 25 acres and includes the town’s first public square, new civic offices and council chamber, residential blocks and a state of the art new performance venue. 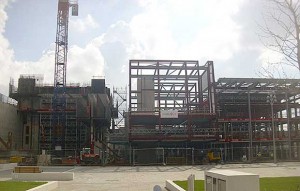 Known as the Civic and Cultural Quarter, the scheme will revitalise the Waterdale area of Doncaster, attracting people and businesses which in turn will have a positive impact on neighbouring parts of town.

The new performance venue will be the centrepiece of the first phase of the development and it is set to transform the art and entertainment facilities across Doncaster and the region when it opens next year. Replacing the nearby 90 year old Civic Theatre, the venue will include a 620 seat theatre auditorium, a flexible second space with a capacity of either 200 seated or 400 standing, dance and drama studios, educational areas which can double up as meeting rooms, and a large foyer with a bar and cafe.

Work on the 5,250m² venue got underway late last year on a site previously occupied by a car park and before that by a college. Early works included levelling the site and installing pad foundations in preparation for the main concrete and steelwork programmes. 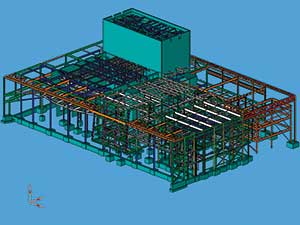 Model showing how the steelwork wraps around the concrete flytower

The structure has a hybrid design, with concrete being used for the walls of the auditorium and the flytower, and a steelwork frame wrapping around the building and knitting the whole structure together.

“Concrete has been used for acoustics, while steelwork has provided us with the desired speed of construction and the long roof spans in the auditorium,” says Martin McGovern, Arup Associate.

The most prominent part of the main auditorium is the 25m high flytower constructed with in-situ concrete. This is attached to two concrete walls that form the east and west auditorium elevations. This creates the shell of the acoustically sensitive main theatre space. Steelwork then forms the roof, seating tier and the surrounding frame, connecting into the concrete at numerous points.

The project’s largest steel elements are a series of 20m long trusses spanning the auditorium roof. Two of the trusses span the flytower and will support walkways and scenery above the main stage. Consequently they are 3.2m deep, compared to the other trusses over the seating areas which are 2.4m and 1.2m deep.

The trusses are all being brought to site in halves, assembled on the ground before being lifted into place as completed units, with the two deepest trusses weighing 12t each.

“The on-site tower crane was installed specifically with these trusses in mind,” explains Ben Shearman Vinci Construction UK Senior Project Manager. “They are the heaviest elements on the project and we had to have a crane with adequate capacity.”

As well as forming the roof, steelwork also forms the auditorium’s upper seating tier and back-of-house areas. Here a two-way cantilvering steelwork configuration provides the seating at the front and the office spaces to the rear, while also providing the stability and support for a large 20m long × 12m high plasterboard wave form feature wall, which separates the theatre from the foyer.

Although structural steelwork creates the majority of the building’s frame, another significant hybrid construction area is the flexible second performance space. This smaller performance area will accommodate spectators on a first floor balcony that runs around the entire hall, while the open plan area is formed by a number of 15m long 3m deep roof trusses.

In order to create an acoustically isolated area, this space is a box within a box, with an outer concrete encased perimeter line of columns installed around another inner line of steel columns.

The columns to be encased in concrete were erected along with the rest of the steel frame by Elland Steel Structures. Once they were up the area was handed over to the concrete contractor who then poured the surrounding structural concrete around the steel members.

“This was another example of how the steelwork and concrete contractors had to coordinate their work,” says Mr Shearman. “There are also a lot of interfaces between the two materials and this required Elland to supply cast-in plates to the concrete contractor to be installed in the auditorium walls and the flytower.”

Elsewhere in the structure the steel frame forms two other large studios and three floors of rehearsal rooms and offices. Concrete lift shafts and the auditorium walls provide the steelwork with its stability, but in some areas bracing has been installed.

The majority of the front elevation of the building will be glazed and to accommodate the glass a series of bespoke fabricated 12m high feature columns have been erected. The middle portion of the front façade will be the structure’s focal point as it features a cantilevering box to be clad in copper.

Due to be completed in April 2013, the Mayor of Doncaster, Peter Davies says the venue presents an historic moment for the town. “With its numerous performance spaces and world class facilities it will be another big attraction our residents and visitors can benefit from.”