Big is best for distribution 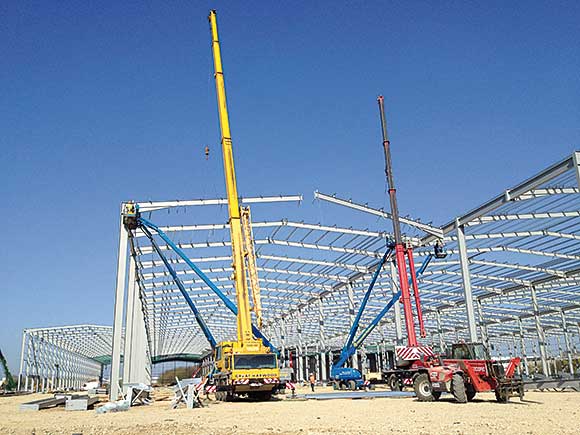 Speed of construction is of utmost importance to the client

A large distribution centre in Reading is being constructed for Tesco, and steelwork’s speed of construction is ensuring a tight programme is being adhered to.

Located on the outskirts of Reading, a large 83,984m² Tesco distribution centre under construction on a former brewery site, is set to provide in excess of 1,000 job opportunities for the area.

This £27M contract is being carried out by Vinci Construction and building work will be completed to a BREEAM ‘Excellent’ standard as the structure will emit 34% less CO2 than the levels imposed by the 2010 building regulations.

Like the majority of large distribution centres this project is relying on structural steelwork to form the building. It is a portal framed structure with a 185m width, formed of six spans and a length of 448m comprising of 56 × 8m bays. To the underside of the haunch the warehouse is 14.5m high, while internally there is a 16m wide office mezzanine level which is eight bays long.

“These structures are usually steel framed as it’s a tried and tested method of construction,” says Vinci Construction Contracts Manager Rob Bull. “With steel you get a quick and economic construction scheme.”

Speed is of upmost importance on this project as Vinci only started work on site during January and steelwork is helping to achieve a demanding programme.

The company inherited a brownfield site, where the previously decommissioned brewery had already been demolished. Much of the demolition material has been re-used, while large parts of the existing slab have been built over with the new structure’s footprint. Vinci’s early works also included driving 1,200 precast piles into the site, stabilising the footrprint and then installing pile caps with cast-in holding bolts in preparation for the steelwork. 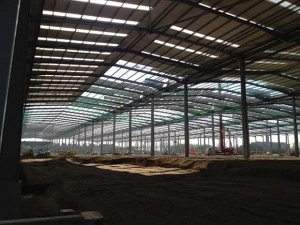 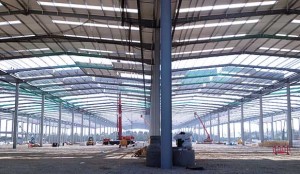 Steelwork erection was completed last month (April) during an 11 week programme. “The weather was fine during March and as the ground was prepared and levelled prior to us starting, we were able to get a good start,” explains Richard Woodhead, Atlas Ward Structures Project Manager.

For the most part, Atlas Ward has had 15 steel erectors on site, using two mobile cranes and nine mobile elevating work platforms. Typically, erecting a large multi-span distribution centre like this involves sequencing the frame into erectable sectors. This is precisely what Atlas Ward did, with strips of the building up to 10 bays deep, erected span after span. Once a strip of all six spans was erected, the process began again.

Initially the erectors had to make use of temporary bracing to help stabilise the steelwork, but after the first phase was up, the portal frame was self supporting.

“The size of the phased sequence depends on the location of the internal valley columns,” adds Mr Woodhead. In this case they are spaced at 16m intervals, meaning each phase of the erection process had a corresponding depth.

Interestingly, all of the job’s internal valley columns are plated members fabricated in-house on the Severfield-Rowen group’s plate line. These members are said to achieve greater cost effectiveness for structures like this, and Atlas Ward invariably utilises them for most of the distribution centres it erects.

The distribution warehouse also includes three attached ancillary buildings, a goods in and a goods out ‘pod’, and a battery charging store. These single storey structures vary in size, but are a maximum of 26m wide and up to 24m long.

These substantial lean-to structures are all connected to the warehouse’s main frame steelwork but they are nominally independent structures. The site also includes a separate Vehicle Maintenance Unit (VMU); a steel framed building which is approximately 35m wide by 34m long, and includes a mezzanine level.

Summarising the job, Alan Connell, Fairhurst Partner says the sheer size of the distribution centre was the main design challenge.

“We were pushing the boundaries of steel design with this building’s width and so there could have been pressures on its longitudinal stability without some careful planning.”

A structure of this size also demands some stringent fire engineering to ensure there is adequate smoke control.

“In the past buildings of this size would have required dividing fire walls, but our understanding of fire engineering has improved and this has allowed us to design open plan structures of this size,”says Mr Connell.