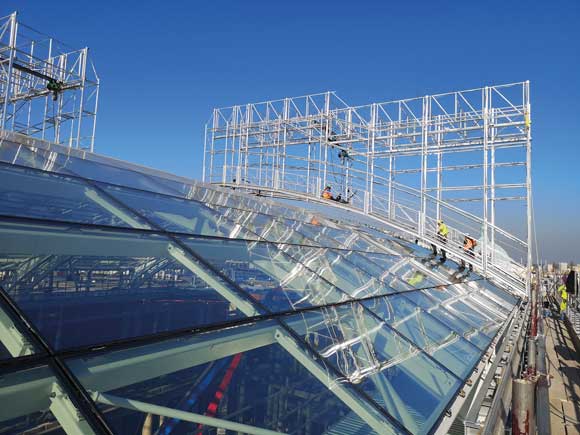 Built at a cost of £90M, Barton Square opened in 2008 (10 years after the main centre) as an annexe for furniture and homeware stores and it is connected to the main Trafford Centre via a glazed footbridge.

Originally, the steel-framed Barton Square (erected by William Hare) was conceived as four separate retail blocks, separated by open air malls and a large central courtyard. The redevelopment will see the malls spanned by steel-framed glazed roofs, while an impressive 36m-diameter steel and glass dome will cover the central courtyard.

As well as the roofs and dome, the project will also allow the upper level of Barton Square to be used for further retail and leisure uses, with new lifts, escalators and walkways providing links.

“The two-storey blocks were future-proofed in anticipation of mezzanine levels being added as there are 8m-high floor-to-ceiling heights throughout and much of the ground floor already has mezzanine floors,” explains Vinci Construction Project Manager Jonathan Roberts.

“There is also provision in the structure’s steel-frame and the foundations for the additional vertical loads resulting from the roof structures and dome.”

Made up of 1,354 individual steel pieces, the dome is the centrepiece of the scheme and has been formed with plate girder rafters, 200mm × 200mm SHS purlins and 80mm x 80mm SHS glazing bars.

The dome structure was erected in small sections to due to the complex nature of its shape. The erection process utilised a temporary steel prop to hold the steel sections in place during the assembly. Only when all of the dome’s sections were fully connected, could the prop be removed and the glazing programme begin. 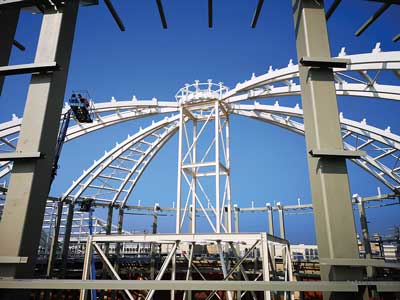 A temporary prop supports the dome during steel erection

“The utilisation of a bifurcated detail for the main ribs allowed the radius of the top ring to be minimised and also meant that the main ribs could be lifted in pairs, which was beneficial in terms of the erection programme,” says Cameron Darroch Associates Director Neil Darroch.

Supporting the dome are a series of rigid joint box frames extending up from the existing foundations, which also support a first-floor curved walkway and a further curved roof deck.

The two main central malls, either side of the dome, are spanned by identical barrel vault roof structures formed by 36m-long curved steel rafters supporting SHS purlins. Each of the two roofs required four rafters.

Fabricated and delivered to site in halves, each half span is formed from a pair of parallel plate girders battened together with top flange bracing and detailed with a bolted apex detail.

“The central section of the plate girders were designed as Vierendeel trusses to achieve the cellular appearance demanded by the architectural concept,” says Mr Darroch.

To resist the large horizontal base reactions from each of the arches, tied thrust girders have been incorporated into the design and are supported off stub columns extending up from the existing steel structure.

More than 80 stubs were installed, with each one requiring a break-out hole that was drilled through the concrete flooring in order to locate the existing steel frame. All of this work was carried out during night time shifts to minimise the impact on shoppers and the mall, which has remained open throughout the works.

A series of proprietary sliding bearing plates have been installed to avoid any significant lateral loads being transferred from the roofs into the existing structure.

Either side of the central courtyard, two shorter, but slightly wider roof structures will span the cross-malls of the Centre.

Summing up, both Vinci and Cameron Darroch Associates both stress that steelwork was the only viable option for the works as it ensured the architectural vision was achieved, while also minimised the additional loads transferred to the existing foundations.

The project is due to be completed by early 2020 with Primark having been secured as the anchor tenant, trading alongside existing retailers such as Next Home, Silentnight, Homesense and the Legoland Discovery Centre and Sea Life attractions. 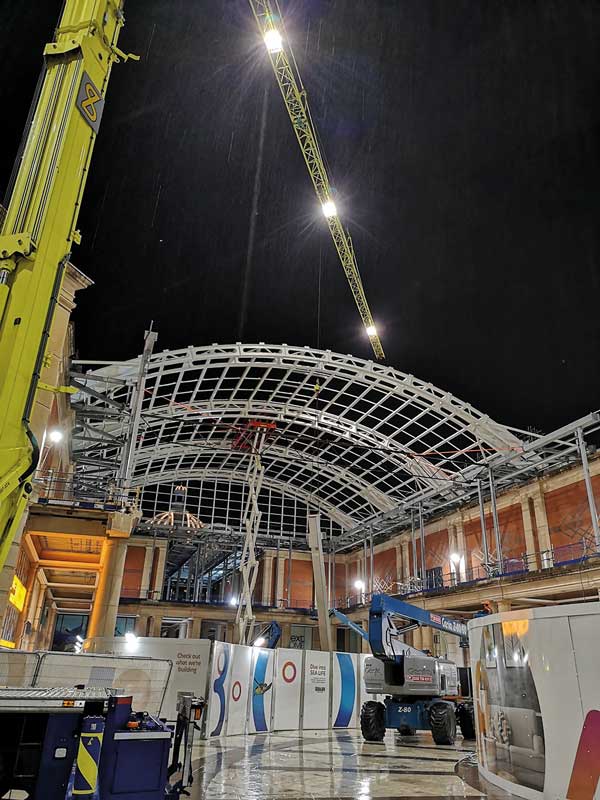 Keeping the majority of Barton Square open during the construction programme has been a key challenge for the project team and consequently much of the work is being undertaken outside trading hours.

All of the structural steelwork erection has been carried out overnight by S H Structures, using cranes positioned in the central courtyard.

An extensive clean-up operation is conducted every morning and the cranes, along with other items of equipment, are positioned behind hoardings during the day to create clear circulation routes for shoppers.

“The logistics of this project have been a real challenge,” says S H Structures Project Manager Chris Richardson.

“When we originally phased the installation of the project we planned on using standard trailers to deliver into site during a day shift. We very quickly realised as we got closer to our start date that site restrictions and planned erection all meant that we would have to switch to non-standard rear steer trailers and deliver and erect at night.

“This required additional resources so we could reduce loading plans per tonne but increase frequency of deliveries into an already busy area, even at night. Each erection phase had to be changed in design to accommodate what could be delivered into site and when.”

Home to thousands of marine creatures, the latter was identified as a key project challenge before the scheme began.
Vinci engaged with the attraction to identify which creatures were most susceptible to noise and vibration. The sharks and rays were considered to be the most sensitive and their tanks are monitored on a 24/7 basis, to ensure no work activities are having any adverse effects on them.