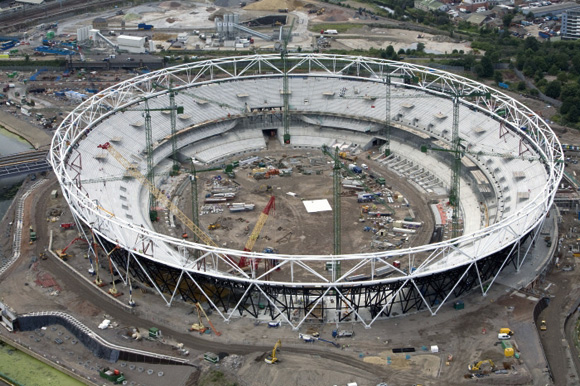 The tubular roof truss was assembled in 28 sections

With less than two years to go before its official handover, Martin Cooper spoke with ODA Project Sponsor Ian Crockford about how London’s Olympic Stadium has sustainably taken shape.

The Olympic Stadium, the centrepiece for the London 2012 Games, is rapidly taking shape and on target to cross the finishing line for its 2011 handover. Time has always been one of the main challenges for this prestigious job, but the 80,000 seater stadium is set to meet its completion date, scheduled a full year before the Games to allow test events to be held.

As of last month (September) the majority of the steelwork programme had been completed, which included the rakers for the demountable upper tier of the stadium and the roof trusses.

With these upper sections in place the stadium’s bowl shape is now visible for miles around and it has already become an east London landmark. “This is a ground-breaking project,” says Ian Crockford, Project Sponsor for the ODA (Olympic Delivery Authority), commenting on the project which is now more than a third of the way into its programme. “This is not only the most sustainable Olympic Stadium ever built, but it’s also the most flexible,”

After the Games the stadium is likely to be scaled down to a 25,000 seater by demounting the steel-framed upper tier, leaving behind a legacy facility for athletics and other sports.

“This is an important part of the project,” adds Mr Crockford. “We are not just constructing a stadium to host the Olympics, we are also creating an arena which will benefit the local community for years to come.” 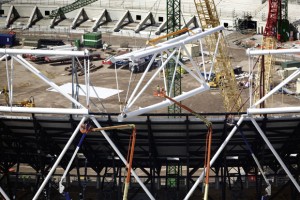 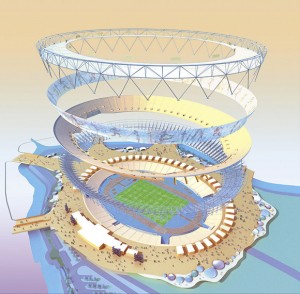 How the demountable stadium will work and the arena takes shape 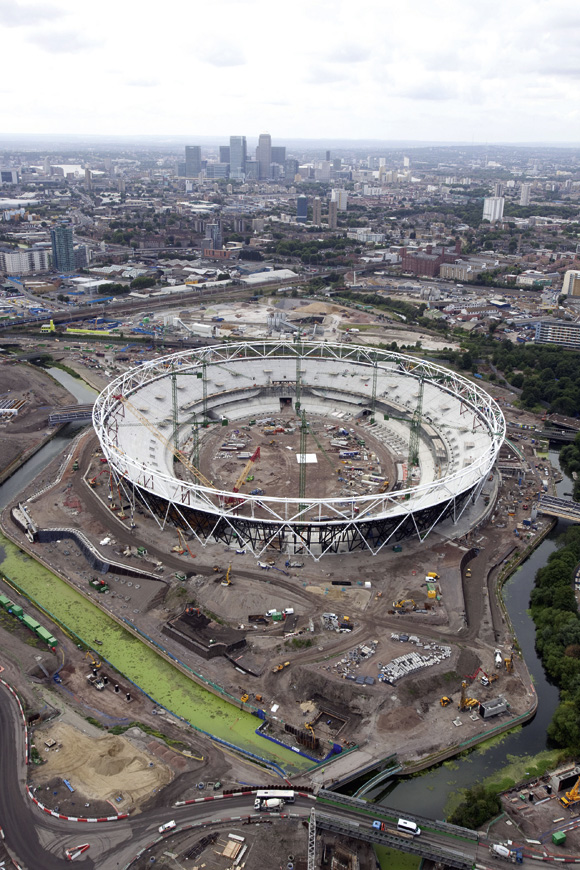 The Olympic stadium and surrounding area

Sustainability is certainly a buzzword at present, and this project has a number of green credentials to its credit. Only 10,000t of structural steel has been used on the project, making it the lightest Olympic Stadium to date. In stark contrast to the 40,000t needed for Beijing’s Birds Nest Stadium, the majority of London’s steelwork is demountable and can be recycled at a later date.

Other environmental initiatives have included taking truckloads off of the road network by making full use of rail links as well as nearby canals and waterways to bring materials to site. By the time the project is completed, it has been estimated that less than 50% of the stadium by weight will have been brought to site by road.

From the beginning of the project environmental issues have come to the fore. Over 33 buildings had to be demolished to clear the site for the stadium. These concrete structures have all been recycled with the material used throughout the Olympic Park.

As well as the desire to create a sustainable and long lasting stadium, the project’s site has also played an important role in the design. The project team had to set about devising a plan to cope with the tightly enclosed site.

The stadium is hemmed in on all sides by two branches of the River Lea and an embankment containing one of London’s main sewage arteries.

In order that the stadium does not stretch out and over these waterways it has fewer concourses and public facilities. Instead, cafes, restaurants, fast-food outlets and shops will all be located in pods at podium level.

“This is one of the reasons we’ve achieved the desired lightweight and compact design,” explains Mr Crockford.

Construction work has progressed well and Mr Crockford points out the project team has considerable experience of similar, if slightly smaller, projects. They all worked on the Arsenal Emirates Stadium and the conversion of the Millennium Dome to the O2 Arena.

Early works saw more than 4,000 permanent piles installed for the stadium’s foundations, while on top of this more than 100 × 5m-high concrete columns were erected to support the podium and lower ground floor which contains back-of-house facilities.

The site is also sloping and this has also been incorporated into the design by locating the athletes’ changing rooms and warm-up areas in a basement area at the lower end of the slope beyond the bowl.

Above the concrete bowl, which consists of the lower and permanent tier of the stadium, Watson Steel Structures erected the initial steelwork. This consisted of 112 steel rakers, measuring 35m-long and weighing 25t each, to support the upper tier terracing.

“The steel compression truss is essentially a separate structure from the rest of the steelwork,” explains Mr Crockford. “It is supported on a series of tubular columns which are founded at podium level.”

Now the roof steelwork is in place a series of cable nets will be erected and tied back to the steel compression truss. The cable net will form the base for the 28m wide fabric roof covering which will provide protection for two-thirds of the spectators.

“The roof works in a similar manner to a bicycle wheel with the compression truss the rim and the cables the spokes,” says Mr Crockford. “A ring of cables form the tension ring which acts like the central spindle of a bike wheel and the opening of which forms the roof opening over the field of play.”

All the cables will be connected together at ground level and jacked into place early next year. A total of 14 x 18m-high floodlights will then be installed around the front lip of roof opening.

In the meantime, the stadium has not made any false starts and the project is sprinting towards the Games starting date of 27 July 2012.