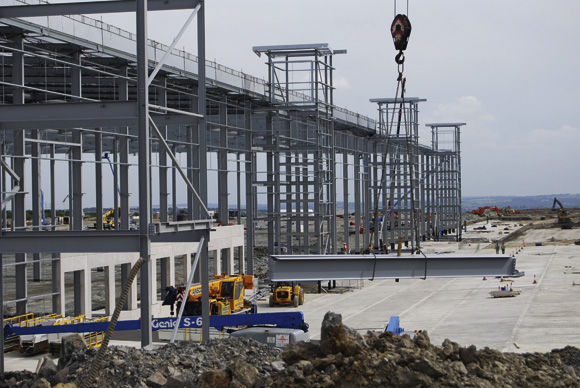 A distribution centre on the outskirts of Bradford is set to help revitalise the local economy by creating thousands of new jobs. NSC reports from one of the UK’s largest ever steel framed warehouse developments.

Most construction sectors have felt the chill winds of recession over the last twelve months. One sector, however, which has seen less of a drop in output is the construction of large distribution warehouses.

A steady stream of these buildings has continued to come on-line throughout the year, with some of the structures a considerable size. Good news for the steel construction sector is the fact that these developments always require large clear internal spans as well as an economical and fast construction programme. This is why the sector is overwhelmingly dominated by steel framed structures.

Business park developers are consequently some of the steel sector’s prime customers and one example is ProLogis, the global provider of distribution facilities. The company has constructed a number of steel framed parks throughout the UK and one of its latest developments is located on the outskirts of Bradford.

Here on the 90-acre ProLogis Park Bradford a new 92,000m² distribution centre and office block is being constructed for Marks & Spencer (M&S). Measuring some 512m x 176m, this is said to be one of the largest distribution centres ever built in the UK.

A 50-50 joint venture build-to-suit agreement was signed between ProLogis and M&S in September 2008, and construction was able to begin early this year. ProLogis expects to deliver the building to M&S in the spring of 2010, and the retailer then plans to open the facility later the same year.

Impression of the warehouse and one of the attached office blocks

Early construction work on this former golf club site included a large earthmoving programme to level the sloping ground and provide a plateau for the new structure. Barrett Steel Buildings was able to begin its steelwork erection in July and will eventually erect close to 3,000t. Early works also included a soil stabilisation programme and the construction of some significant 9m-high retaining walls along the northern perimeter of the site.

Concreting for the service yards, which surround the new warehouse, was also begun prior to the steelwork erection programme. “This made steel erection easier as there was a good surface all around the site, on which to run our cranes and cherrypickers,” says Tony Walker, Design Director for Barrett Steel Buildings.

Barrett Steel Buildings has a design and build contract for all steelwork, and this includes the main warehouse development – including two attached office blocks, as well as stair towers, a link bridge and a future multi-storey car park.

One of the main challenges associated with the steelwork design arose due to the shed’s size and proposed usage. The client wanted to maximise internal space and to that end no internal cross bracing was permitted.

Barrett designed a complex system of roof bracings which allow the wind loads to be distributed to a series of side bracings, strategically positioned to miss doors, offices and windows.

“Often in a warehouse like this with seven spans, there would be bracing in some of the bays,” says Mr Walker. “On this project we had to secrete it away in the roof and then along some elevations.”

The portal framed warehouse also has two attached office blocks, one a four storey structure located at the northern end of the shed and a slightly smaller three-storey block positioned along the eastern elevation.

One of the project’s main features is the roof which includes a series of rafters which are all pre-set for vertical deflection between the ends of the haunches. This maintains a positive slope for the entire steel roof structure.

“Although the roof is curved there was a stipulation that there couldn’t be any negative slopes. This would only create poor rainwater and snow water run-off,” explains Mr Walker.

To cope with any possible thermal expansion the roof design also includes a thermal movement joint which has been positioned half way along the building’s length.

Future expansion and adaptability have played a big role in the design of this project, as BWB Consulting Project Engineer Dom Ginty explains: “The steel frame has been designed to accept an additional three levels of mezzanine, which would connect to the portal frame at first floor level.”

M&S may include these mezzanines at a later date when it has the facility up and running. A steel 25m-long link bridge is also being constructed which spans one of the service yards and links one of the office blocks with the multi-storey car park.

“The multi-storey car park is planned to be built next year,” adds Mr Walker. “In the meantime the bridge will be in place and used by staff to access an existing surface car park.”

The warehouse is being constructed to achieve an ‘Excellent’ BREEAM rating and in addition ProLogis has committed to a carbon neutral shell, by using Corus Confidex Sustain®.