Kinnaird House was constructed in the early 1920s on an island site. It was built using Portland stone held in place by an integral steel frame.

Steel and stone were tied together with mortar, brick and concrete with rubble fill in places. The original floors were constructed using riveted steel plated beams with concrete and hollow clay pots and a floating timber floor. 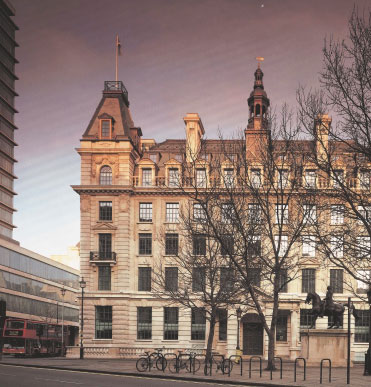 The client’s main criterion for the redevelopment was that the existing character of the building should be maintained while maximising the net lettable floor area. This was achieved by retaining all four façades and reconstructing the internal floors. Careful investigation proved that the existing perimeter stanchions and foundations could remain unaltered. Re-using the majority of the original foundations also produced a design that did not affect the Bakerloo Line running tunnels that cross directly below one corner of the building.

Several studies were undertaken in the initial stages of the project to determine the position of the core and the number of columns within the building. With careful planning and optimising of the beam spans and services locations it proved possible to reduce the total number of internal columns to just four, giving the client excellent floor space. The adoption of a slimflor beam system and lightweight concrete metal deck floor slabs and the consequent reduction in load carried by the foundations enabled an additional floor to be inserted into the old banking hall area and an extra floor to be added for plant at roof level.

New angle brackets were welded to the existing stanchions during the demolition phase to assist in the erection of the steelwork frame. This simple procedure greatly assisted the following main-frame erection process and contributed to safe and efficient work on site. 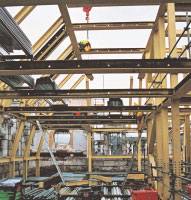 Where appropriate, re-cycled materials were specified. In effect, the original embedded steelwork was re-cycled by its re-use in the new load-carrying frame. Trehearne Architects’ proposal was based on a design that would provide an environmentally friendly building with maximum net lettable area and fully integrated mechanical and electrical services. By carefully selecting the level of the first floor steelwork it was possible to use the existing full height ground floor windows to naturally light ground and first floor without affecting the external façade.

The newly refurbished building achieved an ‘excellent’ rating under the Building Research Establishment Environmental Assessment Method (BREEAM). This is uncommon for a refurbished air-conditioned building in central London.

The key features of the building are the use of simple slimflor beam construction and lightweight concrete on metal decking floor slabs and the connection of the new internal steelwork frame to the original embedded steelwork stanchions. The use of the slimflor construction solution also allowed an unhindered services zone across each floor plate. Steelwork framing for the turrets, chimneys and vehicle entrance also shows that steelwork is a versatile material that can be used to deal with complicated geometry.

Kinnaird House represents a fine solution to the problems of inner city reconstructions, occupying a prominent site near London’s Trafalgar Square. The challenge of inserting new floors, with one additional storey, within the retained façades is a familiar one. The success in coping with the logistical problems of sequencing deliveries, new framing and reconstruction could only be achieved by the skilful use of steelwork.