Four goes into one 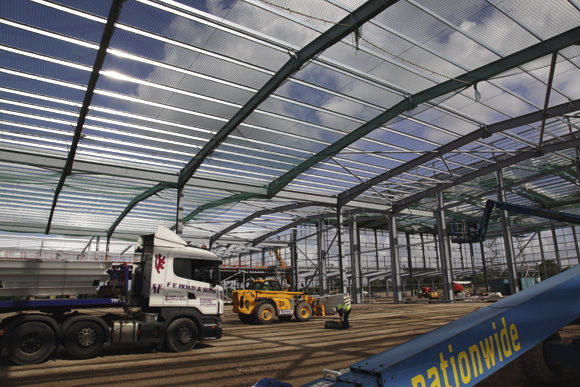 Conder has designed and erected a lightweight steel frame for a new headquarters and warehouse to enable the distributor for grocery chain SPAR to expand its opportunities in the north of England, Victoria Millins reports.

James Hall & Company – one of six SPAR food distributors spread throughout the UK – is expanding its business with a major investment in a new headquarters and warehouse distribution centre in Preston. James Hall & Company began its association with SPAR in 1956 and now covers the whole of the north of England and needs to expand its ambient, and full range of temperature controlled areas as well as increasing its manufacturing and production facilities.

Main contractor Bowmer & Kirkland awarded Conder Structures a contract to design, supply and erect 1,700t of steelwork for the new centre on Bluebell Way in Preston near the M6. Conder was able to produce a lightweight steel frame by making use of cellular beams which also provided a good value option for the client.

Conder has developed the project as four separate sections rather than a single entity. “This mirrors the client’s four main areas of operation which are fresh chilled foods, frozen foods, ambient grocery and food manufacturing and processing. Looked at from above the building takes on the shape of a capital ‘E’,” says Conder’s Managing Director Jason Hensman. 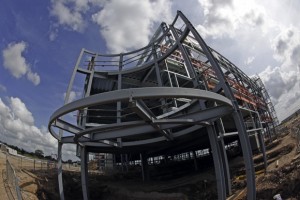 The new main entrance to the building incorporates a 15m high curved feature wall on a 4.25m radius 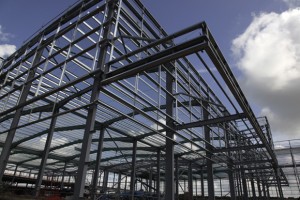 The steelwork for the goods receiving area was completed first

The distribution centre contains a single span low bay portal building to receive goods with 17 dock doors. This is a 30m single span structure which is 5m to the underside of the haunch and fabricated from 610 x 229 x 101 beams. The roof is hipped at the internal end where it abuts to a propped portal and is divided from the adjoining ‘goods out’ section by a feature stair tower.

Stair towers are located on all elevations of the structure strategically located around much of the perimeter. Where there are no stairs the cladding has been designed to create the impression of a ‘virtual stair tower’ to maintain continuity on each elevation.

“On the opposite end to the hipped roof the structure has been designed to allow James Hall & Company further expansion opportunity in the future,” says Jason Hensman.

Connected to the low bay portal is a high bay ambient warehouse. This measures 14m to the underside of the haunch, offers 8200m² of available space and comprises of 32m spans with hit and miss columns and a hipped roof at both ends. The 32m beams are fabricated from 533 x 210 x 62 beams. This and the other portal framed steelwork all include a 2m high parapet around the structures.

The central area of the facility will be a propped portal frame stretching over three spans. It will be 9.5m to the underside of the haunch and 95m deep from the front of the building.

The 150m x 30m offices and suites will be supported on 30 plate girders, each 10.66m long and 20mm thick, that connect to Conder manufactured plate girders formed from a 15-25mm plate. This particular design concept was developed on this project by Conder to deliver lighter and stronger beams for the offices. The beams are more economic and offer easier installation of M&E services.

The last of the four areas is a 54m by 40m low level portal which will function as the food production area. This is 6.5m to the underside of the haunch.

Visitors to the new building will be attracted to the main entrance by a 15m high curved feature wall on a 4.25m radius. This will be finished in stone cladding and will carry the company name above glazed window panels which compliment the design.

The glazed level one frontage is also curved on a 3.33m radius in the opposite direction to the main feature wall and is below a powered metal fascia and soffit. The windows above the entrance will form a balcony. Externally the building will be clad in horizontal bands of Kingspan flat stucco panels in white, merlin grey and cinnamon in six sets of panelling from the roof.

Erection of the steel frame began in May and with the main structural work completed at the end of August the project is on schedule for completion in October when James Hall & Company will commence the transfer from its current premises on Blackpool Road in Preston.