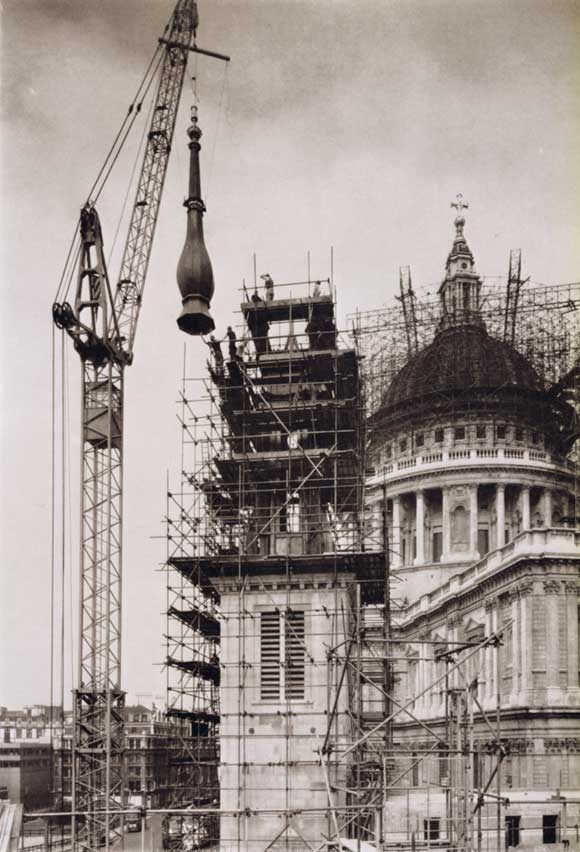 Anything that happens to St Paul’s Cathedral is of absorbing interest to millions of people all over the world. When during the late war London and the City in particular was receiving a nightly rain of bombs, most of us thought it was only a question of time before Wren’s beautiful church was destroyed.

But no major catastrophe occurred: although some damage was inevitable – the choir and North Transept were struck – the great cathedral survived to all intents and purposes intact while all around it everything was flattened. Some considered it a miracle.

A close neighbour of the cathedral was not so fortunate and bombing left little more than the walls of its tower. This gaunt shell has stood stark and ugly for more than twenty years. It is the church of St. Augustine, one of Wren’s city churches literally across the road from St. Paul’s.

Two decisions were taken which made national news and as steelwork has had a little to do with implementing both of them, ‘Building with Steel’ is a natural medium to spare a little space for the record.

Firstly, it was decided to clean the outside of St. Paul’s while the small bombing depredations were put right. As the outside walls had not been cleaned since Wren’s builders finished their work early in the eighteenth century this was a decision received with mixed feelings. However, it has been completely vindicated and unsuspected beauties in the fabric have been revealed for the first time for many years: in fact, the building bears some real resemblance to its appearance 200 years ago.

The second decision was to keep St. Augustine’s church tower and make it an integral part of the new Choristers’ School now being built on the space left by the original bombing.

With the cleaning of the stonework of the cathedral completed the dome then came under scrutiny. This part of the building had been affected by blast from bombs and it was decided that its lead covering should be renewed, the cross at the apex regilded and the upper stonework of the Golden Gallery cleaned.

To carry out this work a tubular structure of fascinating and apparently complex design was erected on the stone gallery: height of this structure is 90 ft by 135 ft outside diameter at the stone gallery level (approx.) which is about 200 ft above road level. Overall height of the cathedral to the top of the cross is 365 ft.

It consists of two outer rings of scaffold tube braced in elevation and also braced together in section and in plan forming a cylinder 9 ft thick by 90 ft. high. Inside the cylinder the internal scaffolding is supported by radial beams which in turn are carried by steel cross girders at the top of the structure. The braced cylinder acts as a hollow column to carry the whole of the vertical load and as a cantilever to resist the horizontal wind load.

In the design of the main girder the problems to be solved were erection, weight and deflection. While the span could not be reduced it was decided, due to the enormous depth of the first and second inner standards, that with suitable diagonals this part of the structure would cantilever from the outer ring and so reduce the load on the main girders.

After fairly intensive investigation it was decided to use a girder of structural steelwork sections. This decision obviated the unknown slip problem – this occurs at scaffold fitting joints – and reduced the design to orthodox structural steelwork methods. The girder is box-shaped in cross-section with the top booms of 3½ in.2 by 6 gauge rectangular hollow sections spliced next to the nodes with a pipe flange type connection: the bottom booms are 6 in. by 3½ in. rolled steel joists except at the ends spliced similarly next to the nodes with thick web plates.

No flange plates were used so as to allow the radial beams to be connected at any position. The vertical and diagonal members are respectively 2 3/8 in. o.d. by 6 gauge and 1 29/32 in. o.d. by 8 gauge circular hollow sections. The horizontal wind bracing between the booms is also 1 29/32 in. o.d. by 8 gauge. The girders were prefabricated into component parts, diagonals and verticals were piece small and the booms were made in 18-ft lengths with gussets welded on, to which horizontal and vertical bracings were bolted. A 12-in. camber was built into the girder at works. The heaviest members to be hoisted were the bottom booms at 2 cwt.

These and many other problems had to be solved before the structure which has surrounded the dome of St. Paul’s cathedral for a considerable time could be hoisted piece by piece from the ground to form finally one of the most spectacular and one of the most photographed features in the City of London. 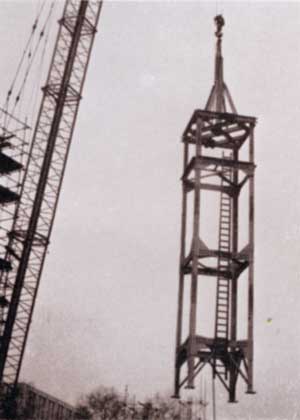 St. Augustine’s
The elaborate plan of buildings and roads around St. Paul’s designed to display the cathedral to its greatest advantage, and made possible by the enormous bomb devastation, includes the building of a new Choristers’ school as a prominent feature of the redevelopment.

The skeleton of St. Augustine’s is being restored and the tower will form an entrance to the chapel of the new school. Among other features incorporated in the reconstruction is a very modern glass fibre spire now in position on the tower. Structural steelwork’s contribution to this interesting renovation is the base upon which the spire rests. The structure is 42 ft high. This steel base was lifted into position with a mobile crane having a 130-ft jib: an unusual operation but it is in such ways that structural steelwork leaves a permanent record in the history of London.