A ‘Grand Stand’ at Lords 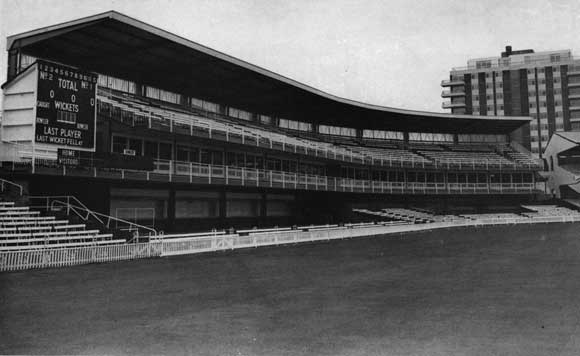 The new stand, including the spectator concourse and the 92 ft run of bar

It was in 1814 that Mr T. Lord leased the now famous ground to the Marylebone Cricket Club and the story of Cricket made way for Wisden. This was not the first ground owned by Mr Lord and used by the Club. This was in Dorset Fields where Dorset Square now stands and was in regular use from 1787 until the ground was developed for building in 1808. Mr Lord then leased the ground at North Bank, Regents Park and took the club there in 1811. The decision of the authorities to cut part of the Regent Canal through the ground forced another move. Mr Lord, carefully removing the turf from the playing pitch, took it to the present Lord’s which began its cricket life in the year mentioned above. 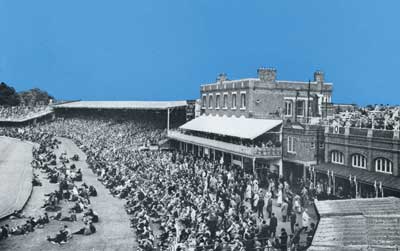 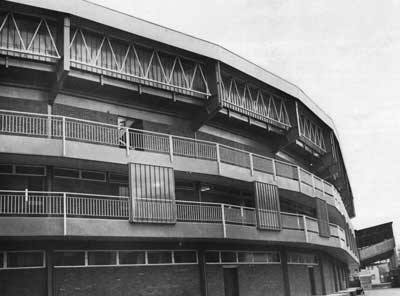 The elegance of the design at the rear of the new stand. 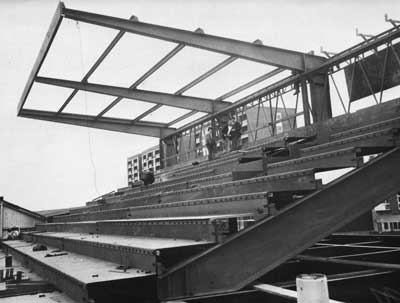 A close-up view of the new stand showing the interesting roof structure, also the terraced decking in course of construction. The use of 5/16 in thick steel plate for the decking is an unusual feature 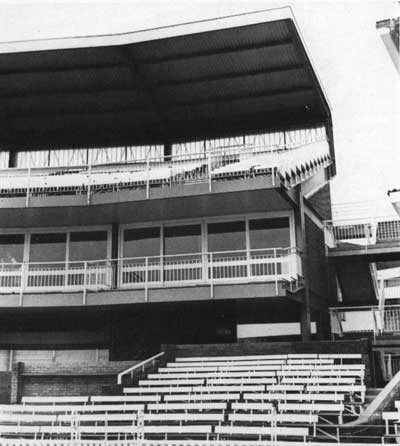 All cricket grounds are famous for some individual or team achievements: Lords, being as it were one of the cradles of the game claims more than most. Contemporary players need no introduction but living memory brings back in haphazard order, W. G. Grace, ‘Plum’ Warner, F. T. Mann, Hearne and Hendren, Don Bradman and his phenomenal scoring, Percy Holmes making 300 plus runs, and many others. The present writer enjoyed the unparalleled thrill of seeing for the first time Macdonald the Australian fast bowler just after he had joined Lancashire and was therefore in his prime. That smooth swift gazelle-like run up to the wicket and beautiful action made and makes any other bowler seem clumsy and laboured. A permanent imprint on the memory.

All of these have passed into history and their successors carry on the bright tradition of the game. As with the players so with the surroundings: it seemed to an older generation of cricket lovers that the Clock Tower – smacked heavily on one occasion by the F. T. Mann mentioned above – and the Tavern were indestructible. And yet today they have gone and it must be admitted that the replacements are better than the originals. Exciting though it may have been – and one was young and vigorous in those days – to be pushed and shoved around with a milling crowd all struggling to get into the small tavern for a ham sandwich and a half pint of bitter, the elegant atmosphere of the new Tavern is a marked improvement.

Dr Grace may squirm slightly in his grave at the moving farther down the road of his memorial gates to make room for the new tavern, but surely even his critical eye would approve of the grand new two-level stand which now stands on the site of the old tavern, members’ dining room and Clock Tower. The stand holds a total of 2,462 spectators with 1,550 accommodated on the upper terrace and in addition contains twenty 12-seater boxes for private parties. The whole redevelopment is costing £1 m. which includes, as well as the new tavern and stand, a large 13-storey block of flats. The stand itself is of steel construction and covers an area of 9,150 sq ft: it makes available 11,500 sq ft of terraced decking. An interesting feature of the design is the use of 5/16-in thick steel plate for this decking. This was made possible by using the steel fabricator’s giant steel press and yielded useful savings on the original estimated cost.

The main support frames weigh nearly 9 tons each and are set at 23 ft 3 in centres, each frame being assembled from eight pieces. The floor support members, in the shape of deep channel sections, were also pressed from steel plate. The stand is of two-level layout, main floor levels being 14 ft and 25 ft rising to 36 ft above ground with the roof at a height of 49 ft, falling to 2 ft 5 in to a pressed steel gutter at the rear. A glazed screen protects spectators in the upper portion of the stand.

Gutters at the front of the stand are in fact the front deck pressings, butt welded at all joints and with sumps connected to galvanized steel down pipes. Galvanized gutters at the rear are pressed out from ¼-in thick plate. In order to maintain the very popular spectator and refreshment facilities that existed in front of the old tavern, a large ramped spectator concourse served by a 92 ft run of bar is sited in its original position. A similar but smaller concourse and bar are also being provided for Members, all this accommodation being at ground level.

The very large spans over the first floor reception and dining rooms of the Tavern made it more economical to use steel for the roof construction though the main structure was of reinforced concrete.

This took the form of lattice girders spanning over 70 ft which cantilever 12 ft beyond the outer columns on one side of the building. The concrete first floor also projects 12 ft beyond the columns and is in fact suspended from the ends of the cantilever roof girders by ¾ in square solid steel roods. This unusual roof construction is expressed in the design with the large roof girders clad in ribbed metal sheeting.