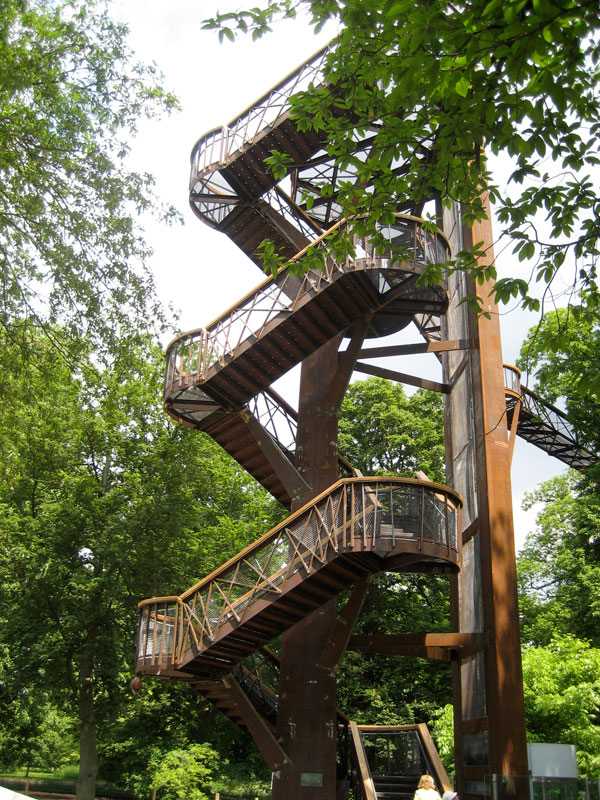 Since opening in May 2008 Kew Gardens’ aerial walkway has been a complete success delighting thousands of visitors with its treetop views.

Brilliantly harmonising with its arboreal setting and providing a dramatic elevated view is how the judges descibe the Xstrata Aerial Walkway.

The initial idea for the project came about when Tony Kirkham, Head of Kew’s Arboretum decided the Gardens needed a permanent walkway to enable visitors of all ages and physical abilities to experience the tree canopy. It replaces a popular temporary scaffold walkway which was erected during 2003.

Chris Smiles, Associate at Marks Barfield and Project Architect, says the walkway gives an up close experience of bio-diversity as well as blending into its arboreal surroundings.

“We looked at many materials,” he says. “But weathering steel was chosen for its strength, appearance and low maintenance, which are all important criteria as this is an environmentally sensitive area.” 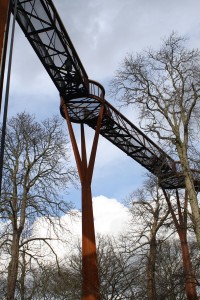 Weathering steel was also chosen as its colour blends well with nature, yet looks man-made, and needs no future painting.

Overall the walkway consists of a 200m-long looped arrangement of modular trusses, connected by circular node platforms, which in turn are supported by triangular pylons, all of which are fabricated from weathering steel.

The natural environment played a key role in the design of the walkway’s 12 trusses. These steel framed 12m long units are designed using the Fibonacci numerical sequence that lies at the heart of many plant structures.

This design has created a seemingly random appearance of truss members, but has an integral strength based on a natural growth pattern.

“Since weathering steel can only be supplied in sheets we chose to fabricate triangular tapered sections that are strongest at the base and branch out to support the walkway,” says Jane Wernick, Director of Jane Wernick Associates.

Offsite construction also played an important role in the construction process. The trusses were entirely fabricated offsite and brought to Kew as completed units with all fittings such as timber handrails, expanded metal decking and balustrades attached.

This ensured minimal impact on the surroundings, while pin connections also minimised the need for on-site welding.

Fabricating the complete truss and node sections offsite meant contractor Britland had only to lift them individually into place during the erection programme.

Erecting steelwork among the valuable trees called for the upmost care and accuracy and Britland worked closely with Kew’s team, who pulled branches out of the way, and did minimal trimming where necessary.

Summing up the judges say the weathering steel plated structure is precisely located to avoid the trees and their roots, enabling close proximity without damage.