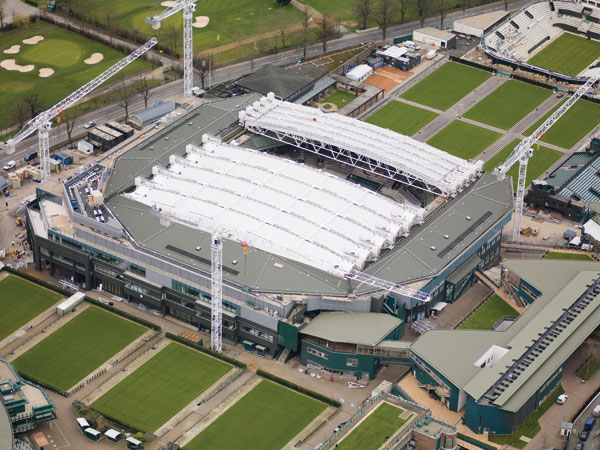 Constructed over a three-year period the steelwork element of the Centre Court redevelopment included the demolition and rebuilding of the East Stand and fixed roof, followed by the construction of a retractable roof to provide full rain cover.

The main objectives of the Wimbledon redevelopment project were to provide a roof for the centre court, to condition the space to eliminate condensation and provide a comfortable spectator environment, extend the terraces to provide the maximum possible seating within the existing structure and construct a new East Stand and roof.

Working on this iconic structure over a four year period without causing any impact on the world famous tennis championships was a major design and logistical challenge which was successfully achieved.

“As well as enlarging Centre Court we’ve also improved the amount of sunlight to areas of the court,” says Dale Jennins, Project Architect for Populous. 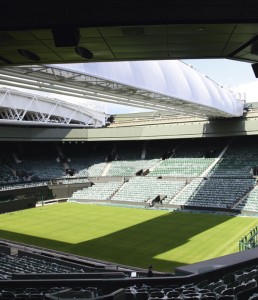 The main focus of the design was driven by the sequencing around Championships and the requirement for maximising pre-fabrication and pre-assembly of the main steel elements. The main trusses for the East Stand’s roof were pre-assembled in an area across the road from the main site. The moving trusses for the retractable roof were designed to be as lightweight as possible by forming a deep lattice truss using tubular sections.

The third year of works presented the largest risk with no default position for major elements. The work completed in years one and two was all about securing delivery in the third year. By year four the project team was in a position to complete the retractable roof with erection commencing immediately after the 2008 Championships. This allowed ample time not only for the construction of the centrepiece moving roof, but also allowed adequate commissioning and testing periods for the structure and its services.

Importantly throughout the project a research and development programme to build a full size mock retractable roof was undertaken in Sheffield. “This enabled us to design, fit, test and underwrite every element of the roof,” says Paul Hulme, Watson’s Project Manager. “This eliminated a high level of risk from this operation and turned the roof build into an installation operation.”

The retractable roof weighs 1,100t and the air conditioning plant adds a further 400t. This means the four main trusses spanning 77m between the columns had to be very substantial, not only in terms of strength but also in terms of stiffness.

“Traditionally moving roofs at stadiums are solid plates that slide, but that would not have worked at Wimbledon because we couldn’t have any overhang interfering with adjacent courts,” says Mr Jennins.

The roof is divided into two sections with four bays in one and five in the other. When the roof is deployed each section is extended over the court and they join in a overlapping concertina seam over the centre of the court. At the same time fabric is unfolded by hinged arms in four lines on top of each truss. Operated by electro mechanical actuators, they help to push and keep the trusses apart.

Deploying the roof over the court will take 10 minutes, keeping disruption to the Centre Court action to a minimum.