Posted on July 1, 2008 by NSC2 in Certificate of Merit, SSDA Awards 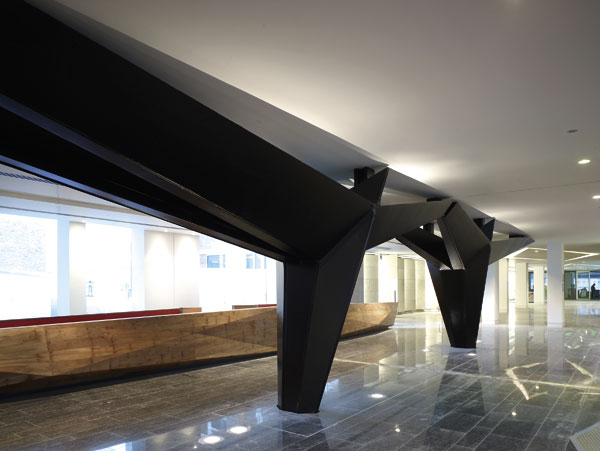 This slim, elegant and angular steel structure replaces 12 original reinforced concrete columns and presents a stunning backdrop in the reception area of this refurbished building.

Three 1960s concrete framed office blocks were purchased with the intention of creating a single multiple use building. Instead of demolishing the structures it was decided to retain the basic frame and replace all the external and internal walls to suit the new uses.

While the majority of the existing column grid was adequate for the client’s use, the main lobby area needed to be an open, column-free space. To this end, the project involved temporarily propping the concrete frame above, removing 12 concrete columns, installing a new steel structure and then transferring the load from the floors above to two existing basement columns below.

The steel transfer structure is in a highly visible area and the architectural requirement was for it to appear as a sculpture rather than a conventional transfer frame. Consequently, all the steel members are as slim as possible.

The structure is formed from two separate sections, mirrored about the centreline of the building, each with four cantilevered arms and two stubs that support the floor above and an inclined column down to a single base plate.

The arms are tapering box sections fabricated from plates up to 80mm thick, while the columns are double webbed I-sections with additional external structural cladding plates designed to cope with the high stresses involved.

Special attention was paid to the visible connection details between the individual plates, their edge profiles and  connecting weld sizes and appearance. A mock up of the column section was produced during the design development stage to allow the architect to define any shadow gaps he wanted to be visible.

Programme constraints meant that each structure had to be split into a number of individual assemblies that could be fabricated concurrently before being sequentially added into the structure.

Each structure weighing 26t had to be carefully manoeuvred into position along a prescribed route between the existing ground floor columns and temporary props with only 60mm clearance each side.

To allow this manoeuvre, and to allow safe loading and off-loading onto road transport, each structure was built into its own individual handling frame that remained with it through the painting process.

The frames were off-loaded outside the building with a mobile crane, positioned on machine skates, moved into the building and manoeuvred into place.

The bases were grouted and the two individual structures were liked together before the load was transferred from the temporary trestles into the cantilever arms using flat jacks on sliding bearings. During the load transfer the levels of the existing structure and loads in the existing concrete structure were carefully monitored  to ensure that no undue stresses were induced.

“This seemingly simple, elegant structure is in fact one of the most complicated structural projects we’ve ever been involved in. The technical issues involved in producing such a slim and compact structure designed to carry some very significant loads were immense and was only achieved by all the various members of the design team working closely together to deliver the architects ambitions,” sums up Peter Miller, Watson Steel Structures’ Business Development Manager.