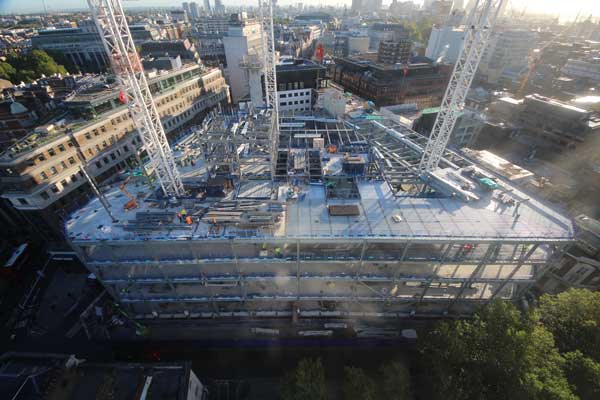 Steelwork erection is under way on the redevelopment of the former Royal Mail Sorting Office on London’s New Oxford Street.

The Post Building is a 29,700m² mixed-use redevelopment, being developed by Oxford Properties and Brockton Capital in joint venture to a design by architect AHMM. Main contractor for the scheme is Laing O’Rourke and the steelwork package is being fulfilled by BHC.

The building is located on an island block bordered by New Oxford Street, High Holborn and Museum Street in the west end of London. It will be the new London headquarters of management consultant McKinsey.

Planned works include the retention of some areas of the original building, significant remodelling of the building interiors including the provision of a new central core, a new stainless façade and creation of innovative office accommodation which will make use of the significant floor-to-ceiling heights within the building’s original structure.

The planned partial demolition of the original 1960s Royal Mail sorting office has now been completed by John F Hunt and Laing O’Rourke has now begun the main construction phase. There will be 25,000m² of offices with one-acre floorplates. Every floor will have its own roof terrace.

The scheme will also have shops, a doctor’s surgery, a public roof space and cafe, as well as 21 affordable apartments.

The project is scheduled to complete in 2018.