New Building for Swiss Re 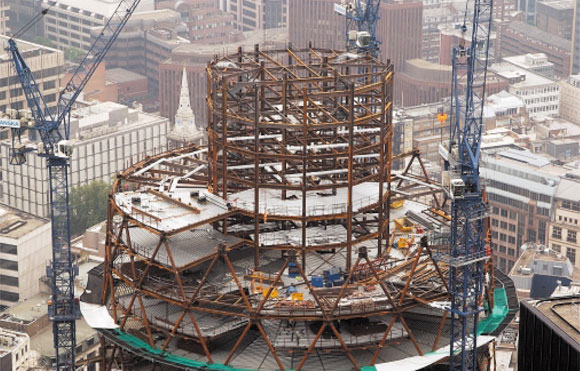 This 40-storey steel-framed office building in London, with its circular plan of varying size and spiralling light-wells, required a special approach to the structural design. Dominic Munro reports.

The site of the building at 30 St. Mary Axe lies at the heart of the City’s insurance district. Its location and history demanded a design of the highest quality that would make a real contribution to the urban environment of the City.

Swiss Re started developing proposals in 1998. Being committed to sustainability, it emphasised in its brief the need for an environmentally progressive design, as well as a high standard of working environment for staff. The

The development of the building form is the result of the synthesis of a number of criteria. The particular success of 30 St. Mary Axe is the way in which imaginative and strong architectural and structural concepts come together to create a building that positively addresses all of these issues. The principal formative ideas can be summarised as:

Tall building design makes it possible to reduce the footprint and help the office floors to be well proportioned for natural light. The unique curved form developed for 30 St. Mary Axe achieves this potential and generates further benefits to the public realm. The building’s streamlined aerodynamic shape protects against a windy environment at street level, and as the convex surface recedes from the eye the building’s full height is not apparent. The diameter of the building is able to gradually increase over the lower levels to maximise the internal space relative to the footprint. The reduction in floor diameter towards the plant floors at the top of the building, culminating in the glazed domed roof, ensures that the building enhances but does not dominate the London skyline.

Flexible and adaptable office space demands a regular internal planning grid. The office floors at 30 St. Mary Axe are organised into six ‘spokes’ or fingers, arranged on a 1.5m grid around a circular service and lift core. Between the spokes are triangular zones that are used as perimeter light-wells. The result is a maximum 14m core-to-glass internal dimension, with all parts of the office fingers within 8.5m of a lightwell. The light-wells are offset at each successive floor by 5 degrees. This twist creates balconies at each level and opens up dramatic views through and out of the building.

The perimeter steel structural solution was developed specifically for 30 St. Mary Axe in order to address the issues generated by the unusual geometry in a manner that was fully integrated with the architectural concept and generated the maximum benefit for the client. A number of approaches were assessed in detail for overall structural efficiency, internal planning benefits, buildability, cost and risk. 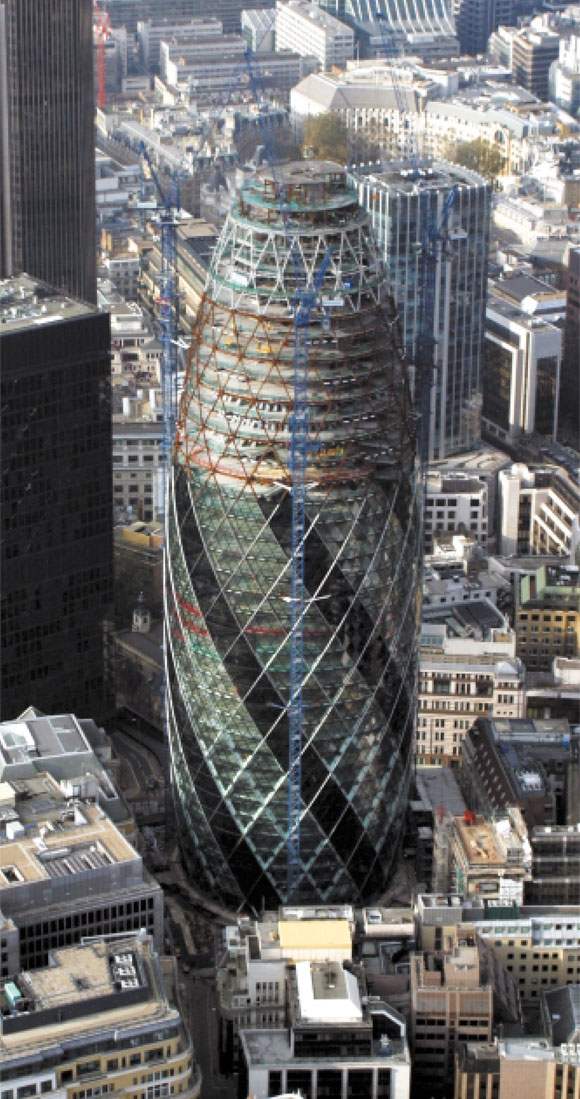 The final design solution avoids large cantilevers and keeps the light-wells free of floor structure by inclining the perimeter columns to follow the helical path of the sixfingered floors up through the building. A balanced diagrid structure is formed by generating a pattern of columns spiralling in both directions, intersecting at two-storey intervals at node points.

The columns are straight between nodes, with a change in direction and orientation at each node point. This gives rise to significant horizontal forces at these points, even under balanced gravity loading. These forces are carried by perimeter hoops at each node level, rather than through the floor structure.

The variation in the diagrid geometry results in compression in the hoops at the top of the building (where the columns are more steeply angled and lighter loaded) and very significant tension forces at the middle and lower levels.

The horizontal hoops turn the diagrid into a very stiff triangulated shell, providing excellent stability for the tower and equilibrium for any asymmetric or horizontal loading conditions.

This means that the core is not needed to resist wind forces and can be designed as an open-planned steel structure providing adaptable internal space. Foundation loads are also reduced as a result.

The sizing of the steel elements is governed by strength criteria – the total sway stiffness of the diagrid is sufficient to limit the wind sway to 50mm over the full 180m height and provides a very good level of overall dynamic performance.

Development of the diagrid nodes

It was recognised at the outset that the node connection detail would be fundamental to the success of any diagrid scheme. The local geometry of the connection varies at each floor level, due to the differing floor diameters. The triangulated nature of the diagrid demanded a detailed consideration of the control of fabrication and erection tolerances.

Two design approaches are possible: one can focus on the individual elements and fabricate end details to suit each situation, or use separate node pieces accommodating all the geometric variation and allowing simple stick elements to be used. The latter approach allowed a simplification in the connection geometry to the consideration of three intersecting planes relevant to a node, as opposed to six individual element orientations. One plane is defined by the axes of the horizontal hoops, one is common to the upper columns, and one to the lower columns. Principal compression loads are transmitted through milled end bearing surfaces, and tension through bolted splices.

The significance of the diagrid connection detail to the steelwork contractor’s method of working in both shop and site made it important for all potential contractors to be given the opportunity to develop their own ideas and approach. The steel sub-contractor developed the detailed node design to meet a number of defined performance criteria, including:

The chosen approach followed the same basic layout as had been defined in the initial design. Great emphasis was given to the accuracy of fabrication of the prepared bearing surfaces of the nodes and columns, which were milled to a tolerance of 0.1mm. This ensured a very good level of fit with minimal site adjustment needed. This was despite the fact that alternate bands of steelwork were fabricated in separate yards and had not come together until erected on site. VB-H developed and tested an innovative tied corbel connection detail between the floor steelwork and the node which allowed the required radial spread of the diagrid during construction whilst providing a reliable degree of restraint to the diagrid nodes.The detail also provided for fine adjustment of the node position during erection using radial tie bolts. This ensured that the ring of hoop tension elements could be closed without the use of oversized holes or pre-tensioned bolts.

The circular floor plates are framed between the core and perimeter structure using radial beams on 10° centrelines. This leads to a range of spans for the composite floor slab of up to 4.75m between beams at the perimeter on the largest floors. Arup worked closely with Richard Lees Steel Decking to develop a design based around the Ribdeck 80 profile to achieve these spans without the need for temporary propping. The overall slab thickness is 160mm with a similar weight to the more conventional 130mm, and also provides improved overall floor plate vibration dynamics due to the increased rib stiffness.

Beam depths are minimised by use of wide flanged (European profile) beams. The beam depth is most critical in the primary services distribution zone around the core, whilst there is a less critical fit at mid-span. This enables the beams to be specified without precamber, whilst maintaining adequate clearances for services. Within the cores the beam spans are much reduced, allowing the horizontal separation of structural and services zones. The only area where beam web penetrations are required is around the perimeter where supply and exhaust air is ducted via plenum boxes connected to the back of slotted façade transoms.

A fundamental characteristic of 30 St. Mary Axe is the use of a consistent unifying system combined with a constantly-varying geometry vertically through the building. This type of geometry is particularly suited to a parametric design approach: many of the detailed design conditions can be investigated by setting up fixed mathematical relationships between a relatively limited number of geometric parameters defining the building shape. This approach was used to drive optimisation studies, to build up databases of various design conditions allowing rationalisation of structural components and details, and to generate 3D model geometry for analysis, coordination and structural design. An example of this approach is the analysis of the relationship between perimeter column setting out and the facetted cladding geometry which allowed the team to home in rapidly on the optimum geometry for the diagrid.

A full Xsteel model, incorporating centreline geometry and sizes for all structural elements was created by Arup during the detailed design phase. This ability to exchange data in 3D enhanced the level of confidence within the team that the detailed co-ordination was accurate and provided a firm basis to develop the rest of the design documentation. The model provided all steel sub-contract tenderers with comprehensive material list reports, ensuring a common basis for logistical planning and pricing. This alone represents a significant saving in effort for a building in which there is very little repetition of beam lengths.

The 3D model was subsequently adopted and developed by the steel sub-contractor to generate fabrication information. The continuity of model information from analysis through to fabrication greatly reduced the scope for errors in interpreting the design requirements. The steel 3D model provided the basis for detailed co-ordination of several trade interfaces including cladding and building services.

The upper three levels of the building from level 38 provide corporate facilities for Swiss Re and other tenants, including private dining rooms, restaurant and an upper viewing mezzanine offering 360° views over London. These levels are enclosed with a steel and glass dome structure of 30m diameter, rising 22m from its support on the top of the perimeter diagrid. The dome steelwork is a fully-welded lattice of intersecting fabricated triangular profiles. The efficiency of this structural arrangement results in very minimal steel elements that are only 110mm x 150mm in section. Steel erection With planning permission granted in 2000, enabling works for the single-level basement were able to start on site in December. Steel fabrication started in July 2001, with steel arriving on site in October of that year. The erection sequence progressed in two-storey bands in the following order:

The steel erection progressed at approximately one band per fortnight, with concrete poured eight storeys below the core erection front. The last diagrid A-frame to level 38 was erected in October 2002, to an overall plumb tolerance of less than 10mm over the 160m height.The erection of the fully welded free-standing dome lattice steelwork required a different erection approach. Off-site welding of transportable-sized sub-assemblies ensured that site welding was kept to a minimum. Jigs were set up on the plaza slab allowing two adjacent sub-assemblies to be joined together to form sections of the dome measuring approximately 12m by 8m, which were then erected onto temporary locating jigs at the top of the building. Site welding the members between erected sections completed the dome framing in two level stages, before the removal of the temporary supports. The top ‘spider’ section was erected in one piece in March of this year.

Dominic Munro MA MIStructE, is an Associate at Ove Arup and Partners, London