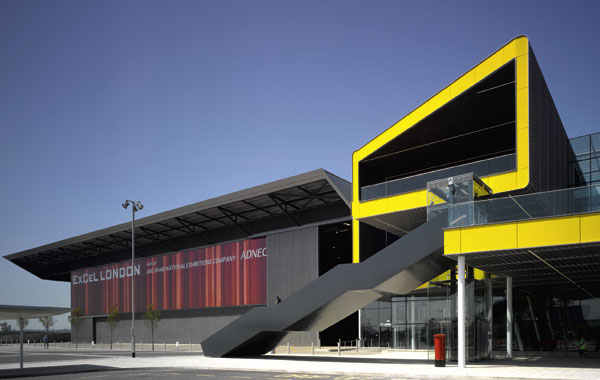 The use of steelwork was paramount for the construction of Phase 2 at London’s ExCeL, where a series of new column free spaces, which can be subdivided as necessary, have successfully remodeled the structure into a multi-purpose venue.

The construction of Phase 2 at London’s ExCeL has increased the venue’s overall floorspace from 65,000m² to an impressive 100,000m², making it the second largest venue scheduled for use at next year’s Olympic Games.

Central to the new extension are two new halls, both featuring 86.9m column free spans. These halls can both be subdivided into smaller exhibition spaces via moveable partitions, allowing the venue maximum flexibility.

Speed of construction was important for this project and the steel framed superstructure was fully erected in just over four months and a fully covered working enclosure delivered six weeks later. With the Phase 2 venue pre-booked for the day after practical completion for X-Factor auditions, the building was fully constructed in just 22 months.

Forming the venue’s clear spans are a series of 86.9m-long trusses supported at third point by structural masts (or A-frames), which also pick-up the grid of suspended demountable hall partitions. 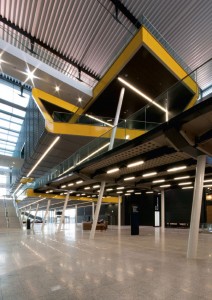 A similar structural configuration was used on the initial ExCeL venue, but on this phase the masts have been placed within the steel frame, instead of along the perimeter.

“The mast design was different as we were constrained by the proximity of City Airport to the south and overhead power cables to the north,” explains Matthew Allen, Engineer for McAlpine Design Group.

According to project architect Grimshaw, changing the mast positions also removed the need for tie down members and increased structural efficiencies through a balanced structural system. The use of ETFE pillows (largest in UK to date) exposes the main mast nodes to public view from the main boulevard.

The eastern elevation of Phase 2 features a stand-out architectural feature known as the spiral, which accommodates foyer and boulevard facilities and is said to bring the facade to life. Formed with vertical raking columns, the spiral acts as a foyer floor, the mezzanine floor accommodating dining space, and a higher level foyer floor serving as a meet and greet area for the adjacent conference area.

Grimshaw says it worked with steelwork contractor Severfield-Reeve to refine structural details of the building to deliver the most economical project.

“A lot of coordination and cooperation was also needed for the mast design,” sums up Mr Allen. “Getting the geometry right was extremely tricky and a trial erection was done at Severfield’s Dalton facility just to get it right before steelwork started on-site.”

Following the earlier buildings, this phase is adapted for the site’s constraints, while improving the circulation areas. The client is delighted, and exhibitors’ enthusiasm is testament to steelwork’s success, sum up the judges.