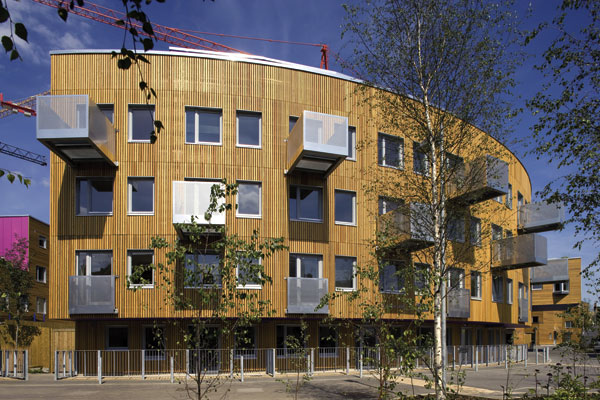 A landmark Anglo-French affordable housing scheme, Bourbon Lane’s steelwork design has heralded a radical change for housing in the UK.

“This is exactly the sort of affordable housing this area needs,” comments Grahame Hindes, Chief Executive of Octavia Housing and Care. “With groundbreaking design, high environmental standards and a safe environment for children, we’re confident Bourbon Lane will blaze a trail for similar development.”

The Bourbon Lane housing scheme in Shepherd’s Bush, London was developed by Octavia Housing and Care. The design was the result of an Anglo-French competition and won by architectural practices Cartwright Pickard in partnership with French company B+C Architects.

The project provides 78 affordable homes for families and key workers. The development contains semi-public open courtyards in the style of a traditional London mews and this creates a sense of place and identity. 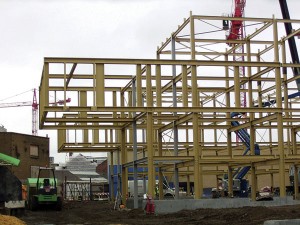 Structural steel was selected for the frame of the buildings following an option study which included solutions in precast concrete and timber.

The steel solution was preferred as it enabled the 6m cantilevers, which are principal features of the blocks, to be accommodated without imposing significant constraints on the architectural vision of the scheme.

Storey high Vierendeel girders were used to create the cantilevers and provide sufficient stiffness such that the habitable environment within flats and terrace units would be acceptable. A number of models were analysed incorporating different arrangements of vertical members in order to optimise the dynamic characteristics of the structure.

The Vierendeel frames generally used 254 columns, whereas the rest of the frame used 203mm beams and columns in conjunction with a 150mm precast hollow core floor and 50mm in-situ structural topping to create floor plates with few downstands.

Overall structural stability of the blocks is provided by a sway frame in the longitudinal direction and cross bracing in the transverse direction. Ties and connections were provided between members to achieve robustness and guard against progressive collapse.

James Pickard, Project Director of Cartwright Pickard Architects, said: “This was a challenging site and we had to provide a wide range of house types that integrate well into the existing urban fabric. The result is an innovative scheme that breaks new ground in urban design and incorporates a number of fresh ideas in the provision of affordable housing, and particularly the design of high density family homes. Our aim was to create a thriving and interesting neighbourhood, without the appearance of conventional social housing.”