A large town centre development is benefiting from steel construction’s ease and speed of construction.

Known as The Crescent, the project occupies a large swathe of the town centre and will ultimately deliver a large 6,500m² Sainsbury’s superstore, more than 25 smaller retail outlets, a five-screen Cineworld complex, a revamped bus station and a 550-space undercroft car park.

Commenting on the project, Leader of Hinckley and Bosworth Borough Council, Stuart Bray says: “This represents a significant investment in Hinckley that will bring a great deal of new employment and prosperity to the town.”

Work commenced on the project during the summer of 2014 when main contractor Bowmer & Kirkland began a phased demolition and groundworks programme.

This work continued into the New Year as approximately one-third of the site could only be handed over to the project team in January.

As well as the challenge of phasing much of the work, the topography also presented another challenge.

The site incorporates a steep slope and so a large retaining wall has had to be constructed across the mid-point of the site. This allows the ground floor level to stretch seamlessly across the entire site, with only a few minor pedestrian steps, while within the retaining wall the project has a basement level accommodating the car park.

“When the steel erection commenced it had to be phased around the groundworks, especially the construction of the retaining wall,” explains Bowmer & Kirkland Senior Site Manager Guy Laughton. 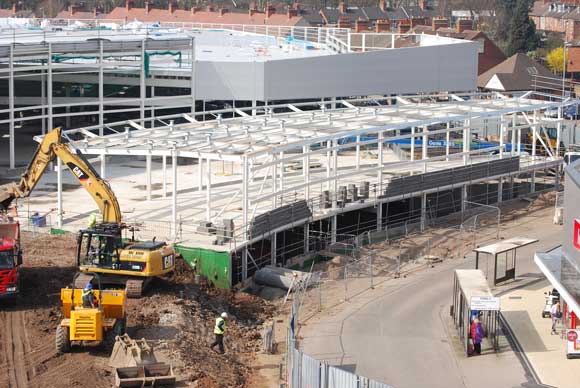 Block B will front the new bus depot

Steelwork contractor for the project is Billington Structures, who was awarded a design and build contract for all of the Crescent’s structural frames. 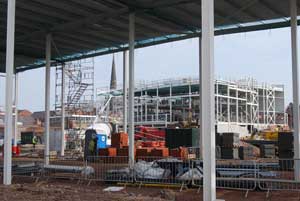 A view of the cinema from the Sainsbury’s store 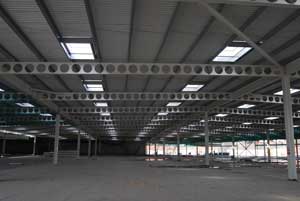 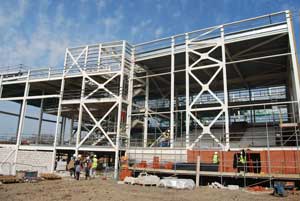 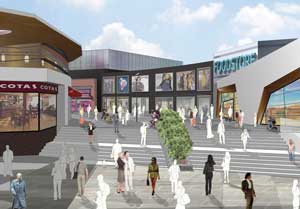 Visualisation of the completed Crescent scheme

Steelwork has been designed and erected around a large 7.5m × 16m grid pattern, which is ideal for the car park and the superstore above.

A series of 16m-long cellular beams form the roof of the car park, chosen for their efficiency and for the fact the beam’s openings allow extra light into the undercroft car park. The beams support a 150mm thick diaphragm deck, which is the floor of the superstore.

Structurally the Sainsbury’s store and car park is one large braced frame that incorporates a first floor service yard in one corner. Because of the extra loadings that will be produced by trucks using the yard, a series of 10t 16m-long plate girders have been used instead of cellular beams in this part of the frame.

Block E is structurally independent from the adjacent retail Block A although, once clad, they will look like one continuous building.

Block A was the zone where the steel erection programme had to be phased around the construction of the retaining wall. Three of Block A’s retail units closest to Sainsbury’s were erected along with Block E, with the remainder put up later in the schedule once the wall was completed and backfilled.

Billington Structures erected Block E and those parts of A using two 60t-capacity mobile cranes, both working in such a way that the two gangs didn’t block themselves in as there was only one access point for delivery of materials.

ASD Westok value engineered the frame on Blocks A and E, alongside Billington Structures. This ensured the greatest design economy was achieved in the structural steelwork solution.

ASD Westok Design Team Leader John Callanan says: “There were a number of design constraints to understand. This complex job involved strict beam depth restrictions arising from the site topography and load-transfer arrangements with columns sitting on both secondary and primary beams in Block A.

“Along with this, there are a raft of varying loading conditions to design for, including retail, back of house, service yard, roof and rooftop plant loading areas.

The next substantial part of the steel package to be erected was the cinema complex on the opposite side of the site from Sainsbury’s.

Some other smaller retail units, between Sainsbury’s and the cinema, have been erected; most notably parts of Block B that forms the ‘Crescent’ around which the new bus station will be located. Otherwise much of the steelwork in the middle of the site is being erected now (May), phased around the remaining piling and groundworks programme.

The cinema (Block C) is another stand-alone steel braced structure and it contains retail units on the ground floor and five cinema auditoria above.

As the retail units and the five auditoria are all of different sizes, the grid pattern for this structure is very complex and changeable.

A single mobile crane erected the cinema steelwork with the programme beginning in January and completing in March. The work also included the installation of precast stairs as well as the auditoria’s seat terracing.

The steel erectors had to leave sections of the roof out to allow the stairs and terracing units to be lifted in. It was very complex as the terraces had to go in last as they are supported on rakers that, in turn, are supported by columns that support the entire structure.

Included in Billington Structures’ design and build contract was the design of a bespoke terracing system for the cinema auditoria.

The design for the seating had to be steel and each of the terrace banks is curved in plan. Billington’s solution was to form each step with curved plated sections, which were brought to site in two pieces and bolted together during installation. The plated sections in turn support metal decking and a thin concrete topping to complete the terracing.

The Crescent is scheduled to open in time for Christmas 2015.