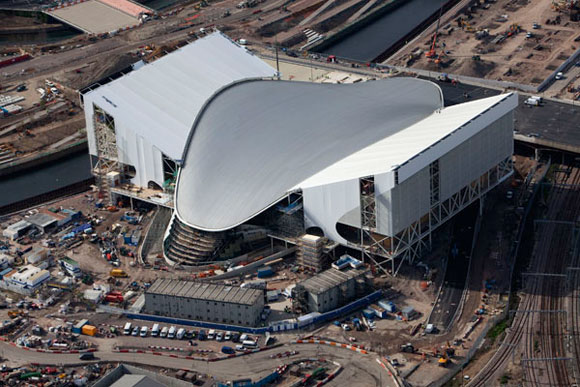 Two temporary stands are positioned on either side of the venue

With its unique sweeping and curving roof the Aquatics Centre will form the main gateway to the Games and is the second largest venue in the Olympic Park.

Designed by Zaha Hadid, the Aquatics Centre will mark the gateway into the Olympic Park for those entering via Stratford Station and the giant Westfield shopping centre. With its eye-catching sweeping steel roof, measuring 160m long x 80m wide, the structure has already become an iconic structure, not just for Londoners, but also for the wider sporting community.

The large steel roof structure is only supported at three points and spans the column-free space for the venues two 50m swimming pools with their moveable floors and separator booms, and the adjacent diving pool. 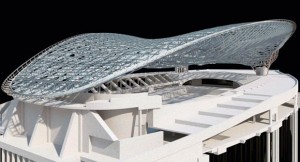 The roof is only supported at three points

Forming the roof are a series of long span trusses, erected in a fan arrangement to create the plan geometry of the structure. The middle truss has a span of approximately 120m to a primary truss, which in turn spans 54m in a transverse direction between two concrete cores. These centre fan trusses cantilever beyond the primary truss to form a 30m overhanging canopy at the northern end.

In legacy the venue will boast a capacity of 2,500, but during the Games two temporary steel framed stands will increase the capacity to 17,500. Structurally the Aquatics Centre, including its temporary elements, is now complete and test events are scheduled for later this year.