Bishop’s Bridge built across the outer ends of Paddington Station

Westminster City Council’s new road bridge is being built across the outer ends of Paddington Station, in stages and with some fairly complex engineering. The composite Bishop’s Bridge is having to be launched across the Paddington tracks on a skew from its supports – contributing to the need for complex jacks, rollers and temporary steelwork.

This is also necessary because the bridge has up to eight rows of plate girders, each varying in depth along the structure’s 100m total length. The bridge is being launched in two stages because there is only room on site to build one of the launch spans at a time – on top of the first two spans built conventionally with the steelwork craned into place. The first launch sequence has just been completed with jacks and rollers pushing, pulling, lifting and dropping as the deck moved.

The project stems from the introduction of the Heathrow Express rail link, which was expected to increase demand for taxis around Paddngton Station. The then British Railways Board and Heathrow Airports Ltd gave an undertaking to Parliament to fund 50% of the cost of a scheme to focus station traffic on strategic roads. The old bridge is being replaced with a wider and stronger structure, capable of carrying 40t traffic loads and jointly funded by Westminster, Network Rail and airport authority BAA.

Hochtief is main design and build contractor for the £32M bridge and road construction project. Cleveland Bridge is steelwork contractor while sister company Dorman Long is responsible for the design and operation of the temporary works and launch. Other project partners include Westminster’s project manager Capita Symonds and Hochtief’s bridge superstructure designer Cass Hayward & Partners. 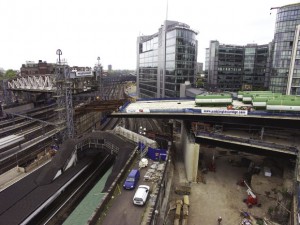 The new Bishop’s Bridge is being launched in two stages. The old truss has been jacked up and will be removed when the launch is complete

“The design of the superstructure was almost purely method led,” says Cass Hayward Partner Alan Monnickendam. “We first and foremost had to develop a bridge erection scheme with spans of 61m and 44m over live railway lines. Concrete was not suitable for launching spans of this length and circumstance dictated a steel composite bridge.”

The new Bishop’s Bridge will ultimately have four spans. From its north abutment, the bridge crosses the Grand Union Canal, then some unused land. The two launch spans will cross London Underground and main line railway lines onto the south abutment. Work started last year with demolition of the old brick and cast iron road bridges, except the most southerly span, a 40m steel Parker truss, which could not be broken up or craned away.

Instead, it was jacked 10m into the air and has been supported on 20m to 30m high temporary steel frames while Hochtief has demolished the old brick supports and constructed new piers. When the new spans are in position the old truss will be lowered back down and taken away via the new bridge to be broken up.

Hochtief and Cleveland Bridge are now constructing the final piece of deck, to be launched in September.

“The second stage launch will be carried out in similar fashion to the first phase, with the insitu deck in place and using four hydraulic jacks, two launching and two restraining,” says Cleveland Bridge Project Manager Raj Soni. “The bridge geometry is complex with cross and longitudinal falls and girders of varying depth so as the deck is launched, the rollers on each pier are continuously jacked up and down to keep the stress in the girders equal.”

The geometry of the bridge’s steelwork, with girders varying from 1m deep to 2.75m deep over the supports, means that at various stages of each launch the deck has to be either pulled over the rollers or held back from running over them under its own weight. Dorman Long’s computer control of the launch ensures a minimum load is always maintained in the restraining jacks to keep the movement smooth.

Vertical movement is also kept at a constant rate by Dorman Long’s launch mechanism. There are eight rollers and eight 350t vertical jacks on each pier, built into steel frames which have been linked to create two groups of four per support. This enables the support frames to be raised, lowered and pitched to suit the changing levels of the undersides of the beams as the deck progresses at a uniform fall of around 5m from north to south. The frames also hold the deck around 3m higher than its final position which it will take after reaching the south abutment and being jacked down into place.

The first 31m deck launch was carried out over two weeks during six nightly rail possessions. The second phase will take longer as it involves a 74m launch, having completed the first launch successfully, the team expects it to go smoothly.