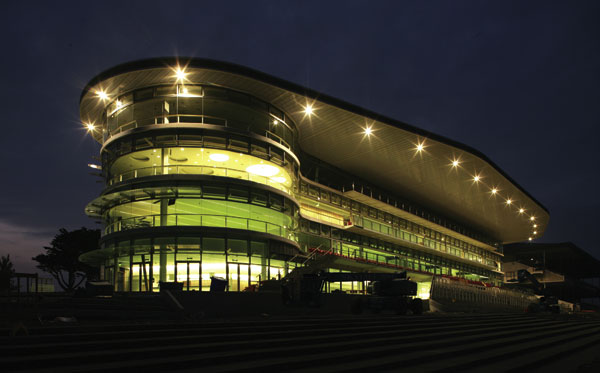 Galway Racecourse plays host to one of Ireland’s most popular sporting events and a new grandstand was constructed to keep pace with a year-on-year attendance growth.

“This tight timetable was one of the biggest challenges associated with the job,” comments Alan Poulton, Project Partner of Campbell Reith. “Moving the 2007 event to another course wasn’t an option, so everything had to be finished quickly.”

The project sits on the plot of a previous stand and has a capacity of 6,000. The structure’s two lower levels offer 700 free seats, bar facilities, snack areas, restaurants, tote hall and toilets, while the top two levels consists of corporate hospitality boxes.

The four storey stand has precast concrete terracing and is topped with a 14m steel cantilever roof.

Ian Kerr, Ballykine’s Managing Director, says steel erection began in late 2006, once the groundworks had been completed, and was predominantly finished during a 12-week programme. This included intumescent paint, which was applied in the company’s workshop and the installation of approximately 4,000m² of metal decking.

A lot of pre-planning was key to a successful job in such a tight schedule. Each company involved with the project had to liaise closely with other trades working on the job.

“As the majority of the steelwork had intumescent paint, elements such as glazing support brackets had to be welded in place in our workshop as site welding wasn’t possible,” adds Mr Kerr.

The stand’s roof contains a total of 67 trusses, most of them different sizes and consequently very labour intensive to fabricate.

Column and beam steelwork for the first, second and third levels was mostly erected in 7m x 4.5m grids, being replaced with double space 14m x 9m grids at the front of the grandstand on the upper two levels.

This design ensured better views of the racecourse from the upper floors because there are fewer columns.

To support these floors 10 large trusses on two levels had to be installed. These 1.6m deep sections were erected parallel to the Course – length wise – and had to match the profile of the glass elevation.

All parties involved with the project say the roof was the most intricate aspect of the job. “Simply describing the shape is quite difficult,” says Mr Poulton.

On plan the roof is not symmetrical, but it is very nearly lozenge-shaped. It is 92.5m long, 31.25m wide and 20.5m high. The structure curves longitudinally, while there is also a traverse curvature.

“This means there are only four standard grids for the whole roof and those are in the middle,” sums up Mr Poulton.