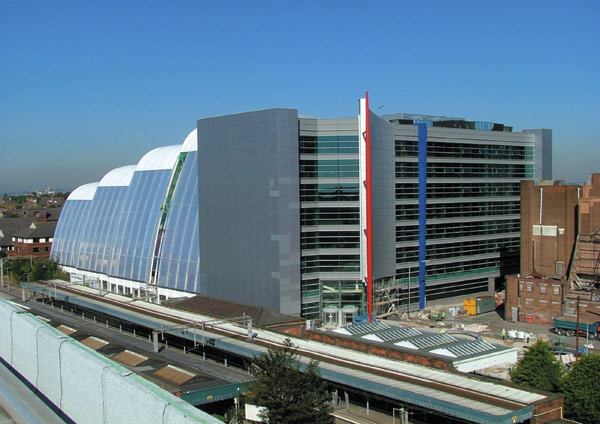 The design concept of the new £40M campus was based on the human body and the building fully demonstrates the flexibility that structural steel can bring to a project.

Having a successful track record in education, the South East Essex College was able to secure funds from the Higher Education Funding Council for a new building in the centre of Southend.

The brief was to create a flexible structure with clear open spans. Consequently steelwork was utilised throughout to build economically, quickly and imaginatively, exploiting the strength and flexibility of the material. Structural engineers Adams Kara Taylor says its approach was to identify the key elements to achieve the greatest efficiency and least redundancy.

The result is an L-shaped five-storey building with a steel frame around cores housing teaching and administrative facilities with a large atrium located in the angle of the block. This large lean-to atrium is ETFE cushion clad, stands 36m high with a maximum span of 34m, and is one of the largest steel elements of the project.

David Rollason, Project Associate of architects KSS Design Group says the concept behind the campus was to build a body of learning. “The main building is therefore the spine and the attached atrium is the rib cage,” he says. 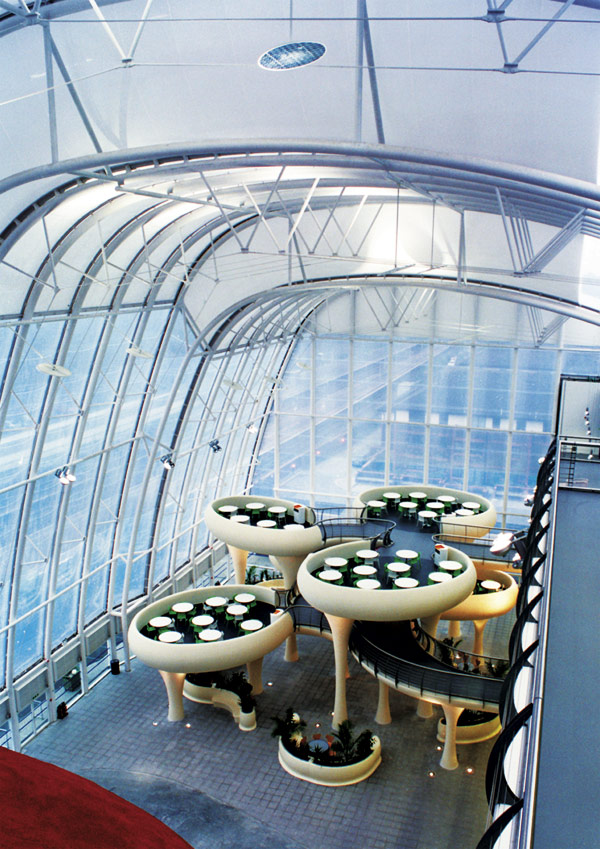 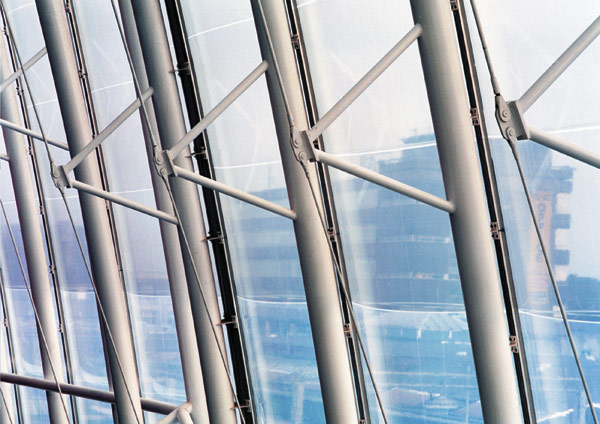 The large, light and airy atrium was constructed with tied steel bowstring arches and CHS’s which link into the main building via a large triangulated steel 3.75m deep steel truss.

All structural steel for the main building’s frame, including the sectional truss, was fabricated and erected by DGT. The company says approximately 1,200t of steel was used and the main challenge it had to overcome was erecting around concrete cores on a very busy site.

One of the main design challenges was designing the connections between the atrium and the main college structure, Peter Evans, Adams Kara Taylor Project Engineer says.

“There are large differential movements between the steel arches spanning 34m which resist large wind loads and the adjacent “stiff” core. This interface had to be very carefully designed and detailed,” Mr Evans adds.

Meanwhile, inside the atrium there are a number of interesting steel organic-like forms, including six steel mushroom platforms arranged over two levels. These have been created to be used as dining and meeting areas and are supported on steel columns and cantilevered beams which then connect back to raised balconies.

Another element of the atrium is a bright red ‘pod’ structure which houses a 250-seat lecture theatre. This was constructed by using a number of steel frames to achieve the required complex geometry. The atrium effectively wraps around the auditorium pod which is a free-standing sprayed concrete shell.

The atrium is also unheated and is in fact a covered external space. “The idea was to create a break-out area for students based around an external covered garden,” Mr Rollason says. “All connecting corridors from the main building are also essentially external,” he adds.

“Our brief was to create a dynamic landmark building, and hopefully the atrium, pod and dining decks achieve that,” Mr Rollason adds.

The judges commented that this unusual structure has brought great value to the process of consolidating the college from three sites into one central location with an exciting new environment.