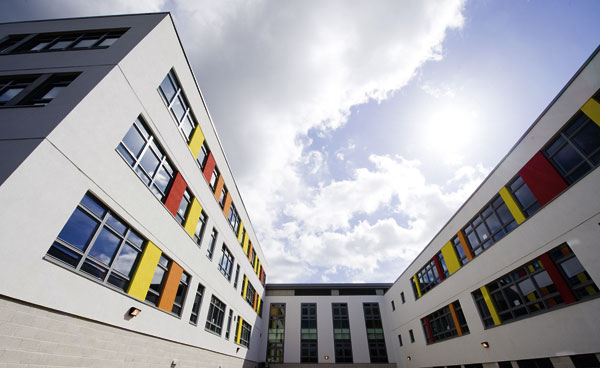 New buildings for Catford High School in south London have been completed, with all building work having been coordinated around the school’s timetable in order to minimise disruption.

“The site was adjacent to the existing school in the middle of a residential area and so security and delivery times had to be programmed to create minimal upheaval to students and residents,” said Charlie Rowell, Bourne Steel Divisional Operations Director.

All steelwork was delivered to site ‘piece small’ and timed to arrive either before or after the busy school opening and closing times.

The build sequence also had to be sequenced around the demolition of the existing old school buildings.

“Part of the new school was initially constructed and handed over,” explained Mr Rowell. “Once the school had vacated the redundant buildings, they were demolished clearing the ground for the construction of the rest of the new build.”

Working on behalf of main contractor Costain, Bourne Steel erected approximately 300t of structural steelwork for the job. The works consisted of a series of blocks, including a sports hall, dining hall and drama hall, all linked by a covered street.