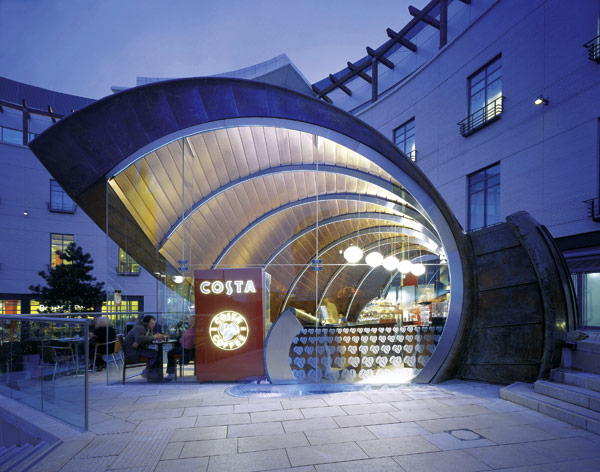 Based on the Fibonacci sequence, this small steel structure is a distinctive feature in the midst of a new shopping development.

One of the most distinctive elements of the £500M Bullring development in Birmingham is also one of its smallest elements.

The Spiral Cafe can be found in St Martin’s Square and the judges say the constantly varying envelope of this small building provides a fascinating sculptural landmark, which sits well in this major city-centre retail area.

The idea behind the structure was to create a landmark building, which would be part sculpture and part revenue generator, while at the same time help animate the hard surrounding landscape.

Helen Rogers, Project Manager for Price & Myers 3D Engineering explains that the Cafe is based on the Fibonacci mathematical sequence, thereby creating a natural shape. “The building is a gem in the middle of the development,” she says.

The natural outline of the structure creates a shell-like canopy and the Cafe is contained between the inner and outer curved surfaces. It both supports the cantilevering roof as well providing accurate formwork from which the rest of the construction takes shape.

A total of eight structural ribs are arranged radially in plan and each tilts up relative to its neighbour to create the overall shell-like form. A series of CHSs are set diagonally between the ribs and together they act as a cantilevering structure. 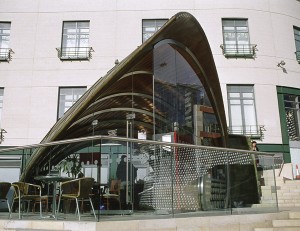 The ribs are supported at points under the roof of the servery and at roof level of the rear annexe. For further rigidity CHS braces act as a cantilever truss supported at the outer tips of first three ribs.

Ms Rogers says the building was designed to be made from laser cut steel plates and in order to simplify fabrication a 3D model of the structural frame was used to generate the necessary drawings.

“The entire building was drawn in a product design programme known as Solid Works, and the architect and steelwork contractor subsequently utilised the same drawings,” she explains.

The structures mild-steel plate ribs were cut on a computer-controlled plasma cutting machine which meant that the form of the building was manufactured easily.

Drawings generated from the 3D model included a set of true plans of each component. This allowed Sheetfabs to take the profiles and add additional information, such as bolt holes and splice locations, before cutting the metal.

A very high degree of fabrication accuracy was achieved in the steelwork and allowed the use of a building wide template for producing other information later in the programme. Elements such as capping pieces were designed on the 3D model with full confidence that they would fit with what was already on site.

The superstructure of the Cafe is painted plasma cut plate connected by CHS sections for lateral support. This is skinned with a plywood timber decking using a warm roof construction and clad externally with post-painted copper, while internally a lacquer finish with bronze panels was used.

In summary the judges say this gem is a testament to craftsmanship in steel.