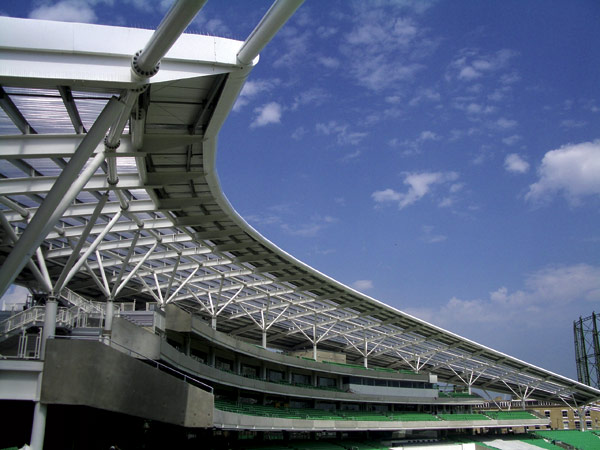 Adding a new visual backdrop to this famous venue, the new 14,500 capacity stand was completed within a tight time scale and opened in time to host one of last year’s Ashes test matches.

Providing 13,850 new seats the £21M OCS Stand has been designed to bring fans closer to the game and replaces a collection of outdated stands and temporary buildings, raising the ground capacity to 23,000 spectators.

The new steel framed stand is spread over five storeys and features a distinctive curved steel roof. The seating terraces are formed from precast concrete units supported by reinforced walls and raking steel beams in the lower tier and fabricated tapered steel cantilever beams in the upper terraces.

The steel roof of the structure is a highly visible structural statement. It is supported by circular hollow section columns branching out at high level with four arms to support the curved primary support beams. As these ‘tree-like’ members are external and visible the connections are fabricated to a high architectural standard.

Les Postawa, SKM Anthony Hunts Project Director says the greatest challenge for the job was delivering the project within such a tight time scales. “We commenced our design in January 2004 and the lower terrace opened in August 2004,” he says.

Once that cricket season had ended the construction team had a further seven months to complete the upper tier and roof, and complete fit out in time for the 2005 Ashes series. 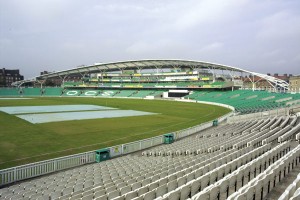 The job was consequently completed in two phases. The first consisted of demolition of the existing stands, piling and sub structure, erecting the steelwork frame and lower precast concrete seating. This allowed for a temporary hand-over during the Summer of 2004.

Beginning in the Autumn, Phase 2 included the completion of the overall superstructure, M&E services and external works. The finished stand was then completed in May 2005.

A slightly unusual aspect of the Stand is the fact that all terraces were designed with a vertical natural frequency of 6Hz. This was achieved economically by adopting an innovative semi-composite interaction between the terrace units and cantilever raking steel support beams which increased their stiffness without incurring any weight penalties.

“This was done to allow the staging of music concerts if the Oval gets a license in the future,” Mr Postawa explains. “Ordinarily a sports ground stand would be designed to a frequency of 4Hz.”

Another challenging part of the project Mr Postawa says was the fact that a clear column free space was required at ground floor to accommodate a community hall. This was achieved by omitting two central support columns between the ground floor and the second level and to compensate two plate girders with a storey high transfer truss have been inserted.

To sum up, the judges say the stand is a most appropriate use of steel, in a geometrically complex arrangement, which adds drama and visual excitement to a world-famous venue.