Posted on September 13, 2018 by NSC in Projects and Features, This month's featured stories 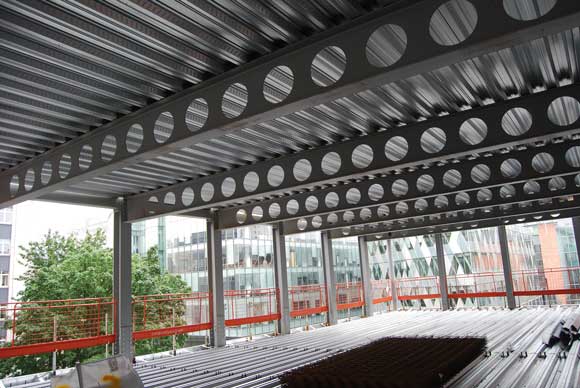 Another development, which is under construction, is 125 Deansgate, a £70M 12-storey scheme comprising 10,500m² of Grade A office space and 1,100m² of flexible retail space spread over ground and first floor.

Main contractor for the job is Marcus Worthington, working on its biggest ever scheme in terms of value. Meanwhile, its sister company, Worthington Properties, forms part of the joint venture main client.

Aiming to achieve a BREEAM ‘Excellent’ rating, the building will feature a double-height reception foyer along its main Deansgate elevation, while the upper levels will provide column-free, flexible and adaptable office accommodation for either sole occupiers or multiple tenants. 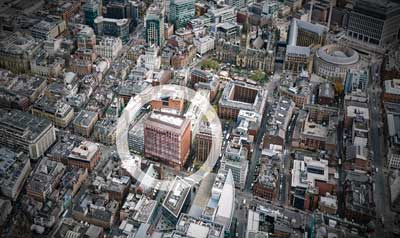 125 Deansgate has been designed as a London-spec office scheme 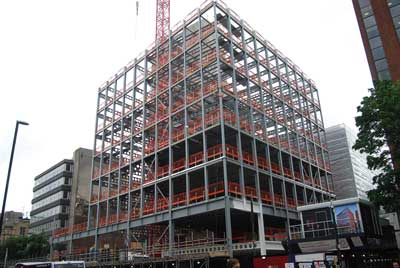 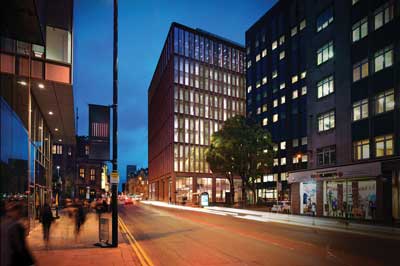 Paying homage to the industrial characteristic of Deansgate with its red-brick Victorian architecture, the contemporary building will be clad in deep, crafted terracota piers to help shade the building and articulate its tripartite proportions.

According to Glenn Howells Architects, the delicate language of the red clay tiles and a strong vertical expression creates a striking, yet complementary, addition to the family of buildings at this important intersection, including the centerpiece Grade I Listed John Rylands Library.

The building will also act as a catalyst for the transformation of the surrounding public realm including Lincoln Square and the adjacent Brazennose Street.

Structural steelwork is the material of choice for most of the city’s commercial developments, and 125 Deansgate is no exception as this scheme comprises a composite design incorporating steelwork supporting metal decking and a 150mm-deep concrete topping.

“We did look at other framing options, but we went with a steel frame as it is the best way of achieving the column-free long-span London-type specification we wanted,” says Marcus Worthington Senior Project Manager Paul McCormick.

“Flexibility also played a role in our decision as the completed project may accommodate multiple tenants who may want to link floors with internal staircases. A steel frame with metal decking will allow us to cut and carve new openings if required.”

The design of 125 Deansgate also includes cellular beams, the majority of which were designed and fabricated by Billington, as the team wanted to integrate all of the M&E services into the structural void in order to maximise the floor-to-ceiling heights.

Work on the project began in early 2017 with a six-month demolition programme of two buildings that previously occupied the site.

All of this preparatory work enabled Billington Structures to begin its steel erection programme in April this year, with a completion date set for next month (October).

All of the steelwork is being erected via the site’s one tower crane as no single member weighs more than 10t, which puts the entire steel piece count within this one crane’s capacity.

“This is a typical city centre site with very little room for material storage as the entire footprint is being utilised. Logistically, steelwork has proven to be the best option because it can be delivered to site and then erected almost immediately,” adds Mr McCormick.

The largest steel elements are located near the bottom of the building, as a row of continuous transfer beams form a ring around the building at second floor.

This series of plate girders, each up to 12m long and weighing 9.5t, forms the building’s feature two-storey high pedestrian colonnade that runs along the majority of the Deansgate elevation. It also forms the larger column-free façades on the other three sides of the building.

“The upper perimeter columns are typically spaced at approximately 3m intervals, but below second floor we only have columns every 9m in order to create large open spaces. Consequently, the plate girders are acting as transfer structures, supporting up to two column lines that end at second floor,” explains Fairhurst Technical Director Stephen Southwick.

The colonnade gives access to the building’s two-storey retail unit, which has a first floor space that wraps around the main office reception area which is a large double-height space.

A second retail unit, which is single-storey, opens out directly onto Deansgate.

From second floor upwards the steelwork is fairly regimented, as the office levels are all column-free spaces with long span cellular beams radiating out from the stability-giving core on three sides to create spans of up 16m-long. The core is positioned along the eastern elevation – towards the back of the building, and so this fourth side of the building behind the core only accommodates toilet facilities and a corridor.

Each floor has primary beams that have considerable spans of up to 14m in places. The longest of these members are supported by two columns positioned just in front of the core.

In order to keep the office spaces column-free these two columns will be concealed within service risers.
Further transfer structures are located at level 8, to create a step along the north elevation, and at level 10 to create an outdoor terrace overlooking Deansgate.