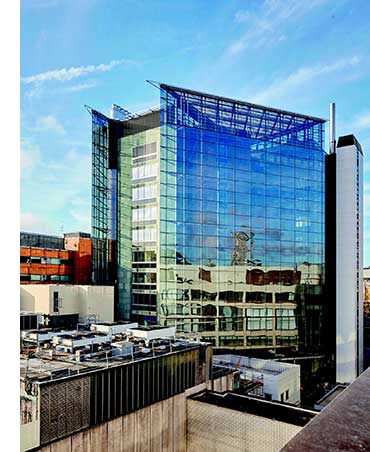 Contractor ISG has completed the £21M recladding of the 1966 built east wing at St Thomas’ Hospital in central London.

The scheme involved the retention and refurbishment of the existing façade on the 13-storey tower, which stands across the Thames from the Houses of Parliament (see NSC May 2014).

This façade was made from slate, teak, stainless steel and ceramic tiles but had suffered from water ingress, excessive solar gain and inadequate lift capacity.

Project architect Hopkins said the project was completed without significant disruption to the hospital, which remained in use throughout the construction process.

Bourne Steel fabricated, supplied and erected much of the project’s steelwork, including a prefabricated and modular lift shaft to accommodate two new patients lifts in the eastern atria.

Prior to installing the lift shaft, Bourne Steel erected the floor steelwork for the two atria. This was formed with a series of 600mm × 400mm jumbo box sections that were installed at second floor level above a triple-height basement.

Supporting the floors are CHS columns, and one feature Y-shaped column at the front that also supports the atria glazing.