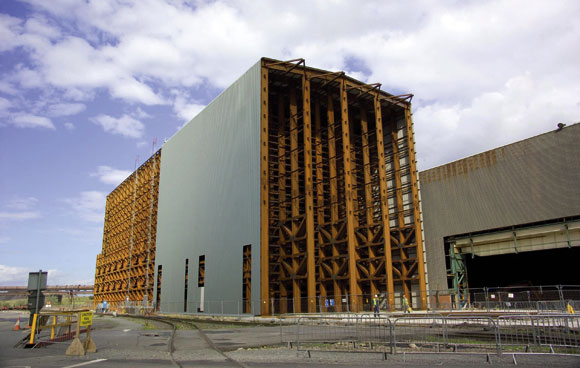 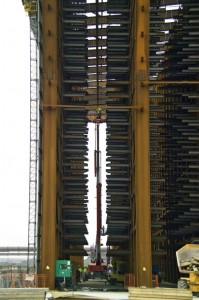 Each of the ADC’s steel prongs were individually surveyed during instal- lation to ensure exact positioning.

There aren’t many steel structures in the world that have been designed and constructed to such tight tolerances and complete structural rigidity as the Automated Distribution Centre (ADC) which will shortly be fully operational at the Corus Scunthorpe works.

This fully automated warehouse, which is 159m long, 25,7m wide and is just over 30m high, will eventually store up to 17,000t of steel sections completely under cover and protected from the elements.

Four computer-operated cranes – one for each of the ADC’s aisles and operating at speeds of up to 3m per second – will place and retrieve steel bundles, weighing up to 6t, from 24 stacking levels and load them onto trucks.

To allow this high-tech computer aided stacking equipment to operate correctly an extremely rigid structure had to be guaranteed. As well as a maximum 17,000t of stock held within the structure, an infinite array of possible load combinations also had to be taken into account when deciding on which type of foundation would best suit the structure.

“We originally thought about a concrete raft for the foundations, but after a survey of the site we knew it couldn’t adequately support the building,” explains Corus Northern Engineering Services (CNES) Senior Project Engineer Ian Clayton. ”We needed extreme rigidity without the risk of differential settlement and steel bearing piles was the only solution.”

Piling contractor Clugston installed a total of 316 x 25m-long steel bearing piles, one for each of the ADC’s columns on a 3m x 6m grid pattern.

This part of the project was the key to getting the entire structure right, says Brian Turton, Senior Project Manager for steelwork contractor Billington Structures.

“We got involved early on in the construction process and together with CNES we recommended that all the bolts were surveyed to ensure their exactness and this would guarantee the columns would be going up in the right position.” 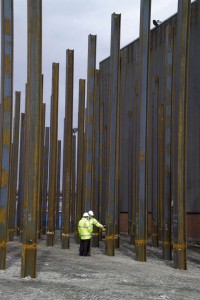 Each column was continually surveyed to make sure it was plumb.

The structure is working to some exact tolerances and a slight deviation at the bottom of the column would mean a seriously out of line steel member nearer the top of the structure, preventing the stacking cranes working.

Once the bolts were set Billington began erecting the 4,350t of structural steelwork for the ADC’s main frame. The columns were formed from Corus Advance 914 UKB sections and erected in two spliced 15m-long sections, to give the overall height of the building. There are five lines of columns and this required two 50t capacity mobile cranes to work at either end of the building, while cherry pickers were positioned in the bays.

As the frame went up it was continually surveyed to ensure it was plumb. “We left the connecting bolts at the splice un-tightened until the survey confirmed their alignment, as we had a couple of millimeters to play with if needed,” explains Mr Turton.

Sequencing also played an integral role in the structure’s erection programme. Once Billington had completed approximately one quarter of the building’s 54 bays, they were able to begin placing the prongs which form the racking on which steel will be stored.

More than 9,500 of these steel 1m-long prongs were installed over a 30-week programme and once fitted they were also individually surveyed to ensure they were in the correct position.

This work was carried out by two teams, allowing for a double check to be incorporated. “The second check was to give us a ‘vote of confidence’ in the work,” says Paul Saddington, Corus ADC Project Manager. “Exactness was paramount because if any of the prongs were slightly out then the entire stacking system wouldn’t work. However, from the outset, the results were encouraging, with very little rectification work required.”

Following immediately behind the prong installation, Billington also began installing the ADC’s single skin steel cladding. More than 17,000m2 of cladding was put up, which equates to more than 124t of the material. 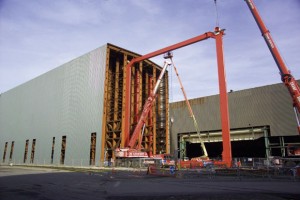 One end of the ADC was left unclad to allow the stacking system to be installed.

The ADC is located on a confined site with an internal live railway line on one side and the Corus Medium Section Mill (where the steel for the facility will come from) on the other. This meant there was no room to run a traditional scissor lift alongside the building for the cladding operation.

Consequently, two mast climbers were attached to the two sides of the structure’s frame. Working up to the eaves, each mast climber enabled six bays to be clad, before being dismantled and moved to the next section of the building.

“The programming and sequencing were key to the project,” says Mr Turton. “At one stage we had steel erectors at one end of the structure, the prongs being installed in the middle and cladders further down the frame.”

Billington finished the structural frame, the prongs and cladding – including the roof – by January this year. The company left an opening at one end of the building for the installation of the automated stacking system and cranes, and once this phase had been completed the final areas of cladding were then finished in March.

Summing up the steel construction, Mr Turton, says: “I’ve heard some people describe the structure as a machine because of equipment inside. But when we were erecting it we had to think of it along traditional construction lines. We weren’t exactly working to building tolerances, but special tolerances.”

Although it is unlikely another ADC will be built in the UK. Asked if he’d work on another, Mr Turton has no hesitation in replying yes. “We’ve done it once, it would be easier next time.” 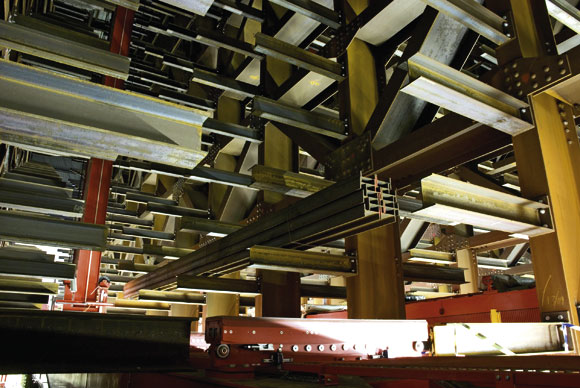 Once steel has been conveyed into the ADC from the adjacent mill, automated computer technology will take over. So sophisticated is the technology running the ADC that no staff will be needed inside the building during normal working hours.

Four computer-driven cranes manufactured by Swiss- based CTI, each weighing 72t and formed by a 33m x 28m frame, will distribute the steel bundles coming into and going out of the ADC.

Computer software, driving the cranes, will decide where every bundle of steel sections should be stored in the ADC, and will be able to retrieve it as and when required.

The steel’s availability is so critical to continued secure operation that two systems, on computers at different locations, will operate in conjunction to guard against potential failure.

The software will generate a label for every bundle and then weigh and measure it, before deciding on an optimum position within the ADC to store it.

“Measuring to such a degree of accuracy means we can work with the building’s design, which is intended to make the most effective use of the available space inside,” says Les Jackson, Project Engineer for CNES Projects and Technology.

The warehouse software will also be able to do housekeeping. If there’s a need to store bundles quickly, the software will put each of them in the first available space. Later, when in-put slows down, it will redistribute the stock to better locations.