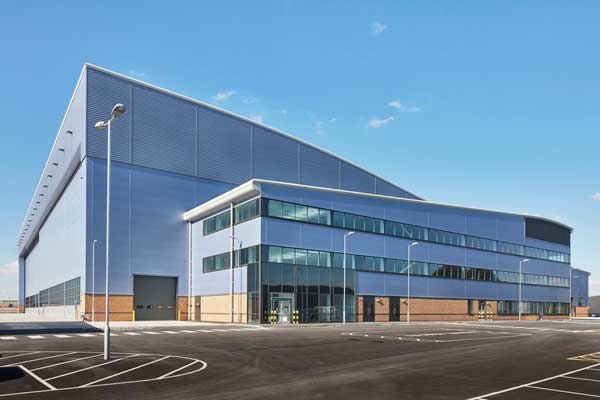 The design and build was heavily constrained by the demands of the airbase, in particular the need to avoid interference with radar and aircraft guidance systems, clearances around runways and taxiways, and the operational requirements of the aircraft

“Structural steel was chosen for its versatility and sustainability: it is the only practical solution for a building of this type,” explains AWW Architects Associate Ian Hunt.

In the fourth quadrant of the building, where there are stores and workshops, the roof is brought down lower; this creates an interesting sweeping roof shape which is also reflected in the roof of the office accommodation beside the hangars. 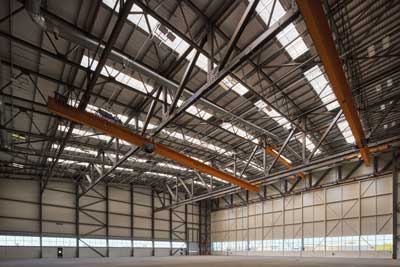 The building is approximately 27m-high, 143m-long × 146m-wide and is located on a military air base on the edge of the Cotswolds countryside. Project architect AWW has incorporated a number of design initiatives in order to minimise the visual impact of the building.

The curves give a more natural shape that fits in better within the context of the landscape.

The colours of the wall cladding of the building are a light metallic blue. It was chosen as it is a very natural colour, reflecting both the sky and the fact that landscapes in the distance tend towards the blue end of the spectrum.

Where necessary to control radar reflection off the building, there is an additional layer of profiled steel cladding on the building’s walls, which also helps to further soften the top edge.

“This is a functional building built to a very tight budget and the nature of its purpose means that there was very little scope for flexibility: the height and position of the building was determined by strict requirements for the aircraft and the airbase.

“Hangars generally are not known for their design qualities: what makes this building special is its pleasing and successful appearance and the way it fits well into its countryside context,” says Mr Hunt.

Summing up, the judges say the design and construction were heavily constrained by the operational demands of the airbase. Satisfying the constraints and the client was a noteworthy success for large steelwork.