The new build will replace the existing High School, which is situated next to the construction site, and two local primary schools.

Building work began in January 2015 and completion is set for this coming summer, in time for the schools to settle in for the autumn term. At this point main contractor Galliford Try will begin phase two of the scheme that consists of demolishing the old school buildings to create new sports pitches.

In contrast to many of the schools currently under construction in the UK, Holywell has an elaborate design combining a three-storey secondary school with a single storey primary school, both housed within two elliptical-shaped zones.

Apart from the sports hall, drama hall and dining areas, the entire school is architecturally challenging as it is curved both on plan and elevation.

The school’s curvature responds to the site’s slopes

The steel frame forms a stretched figure of eight shape, with the primary school formed around an open elliptical-shaped courtyard in the top loop and a three-storey atrium infilling the lower loop, which is surrounded by the secondary school classrooms.

Between the two elliptically-shaped areas there is a two-storey sector which is not curved as it contains the school’s main entrance, a drama studio, kitchens and a dining hall. The other non-curved part of the steel structure is the secondary school’s sports hall, which is connected to the end of the three-storey element.

“The curves respond to the sloping site as there is a 2m-drop from one end of the building to the other,” says Galliford Try Senior Project Manager Graham Ford. “To compensate for this, there are a couple of steps incorporated into the ground floor slab.” 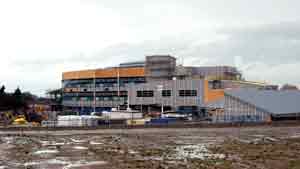 The three-storey secondary school under construction 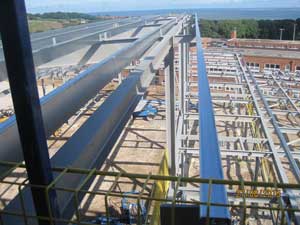 Overlooking the sports hall during the steel erection programme 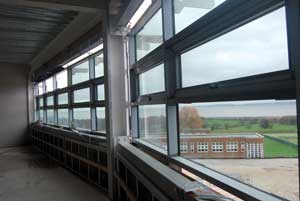 Classrooms have views across the River Dee 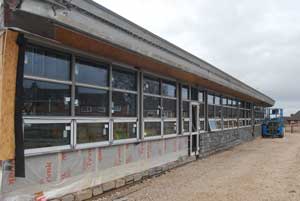 The primary school after the cladding had been installed

Beyond the new build’s footprint the slope becomes even more pronounced as the school’s land descends downwards towards the estuary of the River Dee. A lot of earthmoving will be required during Phase two of the works to level the ground for the new sports fields. The sloping topography however does mean many of the new school’s classrooms will have stunning views across to the Wirral.

A large earthmoving programme was also needed to create a level platform for the new school. Once this was completed bored pile foundations were installed in readiness for the erection of the steel frame.

Locally-based steelwork contractor EvadX began its erection programme in the middle of the school, building the reception area first. This area is stablised by a staircase core, and once up it allowed the erectors to work from here in both directions, with two gangs each having their own mobile crane.

“Prior to erecting the steelwork we had to make use of the architects/engineers’ model and then manually load it into our own Tekla model to make sure all of the project’s challenging radii were checked,” says EvadX Project Manager Steve Morris.

Setting out all of the steelwork during the design phase and avoiding any clashes between steel members and services required a high level of accuracy.

“We used Level 2 Building Information Modelling (BIM) for this project, whereby all trades used the same design model,” adds Waterman Structures Project Engineer James Mackey. “It would have been difficult to design this school without using BIM.”Even though the majority of the classrooms are set out around either a courtyard or an atrium, they do follow a standard design.

Set out around the radius of their respective ellipses, the primary classes are generally 7m wide, laid out in pairs with a shared cloakroom positioned between each pair of rooms.

Because the primary school part of the building is single storey, these classes benefit from an airy 5m-high roof beneath a double-pitched roof.

The steel design for all classrooms has steel columns positioned along the exterior elevations and in the corridors, leaving the study areas column-free. The majority of the steel frame’s bracing is located in the partition walls, as well as in stairwells.

The main difference between the primary school classes and the secondary rooms, in terms of size, is the fact that the latter do not have interconnected cloakrooms, although some can be enlarged and combined with their neighbouring classrooms via sliding partitions, thereby adding flexibility to the design.

One of the main steelwork design challenges involves the three-storey atrium within the secondary school zone. Internal corridors ring the atrium, while link bridges on the first and second floor span the void.

“The architectural desire for the atrium was for a large column-free space so we had to set back all of the corridor columns, so all of the steelwork balconies on the first and second floors are cantilevering,” says Mr Mackey.

Only two columns are visible within the atrium and these are two CHS columns that support the 18m-long link bridges.

Adjoining the three-storey secondary school is a four-court sports hall, formed by a series of 18m-long rafters. This is one of only two areas within the project that has straight elevations. The hall’s roof features two steps with corresponding column lines dividing the hall into the main sports area, changing rooms within the first step and a corridor beneath the lowest roof.

Summing up, Mr Ford says: “This is a very complex steel frame, especially in the areas where low level parts of the building meet high level zones. The project would not have been possible without coordination between all of the project team and subcontractors.”