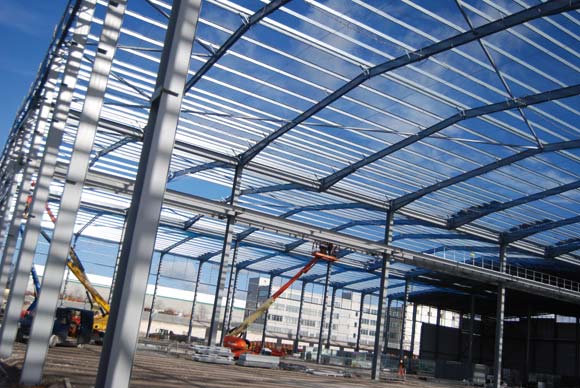 A maintenance gantry is supported by a central row of columns

A new portal framed Sainsbury’s distribution centre is being built in three phases to allow the company to continue operating from the site.

A large multi million pound distribution centre for Sainsbury’s is under construction at Basingstoke in Hampshire. Located on a 36-acre site near the town centre, the warehouse complex will include over 51,000m² of chilled and ambient storage as well as 4,000m² of office space.

The steel portal framed structure is being built in three phases to allow Sainsbury’s to supply its stores from an existing smaller depot on the site during construction.

In order to expand operations, Sainsbury’s bought the land adjacent to its depot and cleared the site early last year paving the way for the entire site to be redeveloped.

Bowmer & Kirkland started work on phase one in March 2012, and as well as demolition the company also needed to complete a cut and fill operation involving the removal of some 50,000m³ of overburden.

“Phase three of the job involves infilling the plot to create an even site for the entire structure,” explains Stuart Goss, Bowmer & Kirkland Project Manager.

The overall distribution centre is 392m long × 132m wide, incorporating four internal spans of 33m each. Perimeter columns are spaced at 8m centres with 15m clear height at the eaves.

Phase one will house the complex’s chilled goods section, phase two the produce section and phase three will accommodate an ambient section along with an attached three-storey office block.

Steelwork contractor Atlas Ward Structures has recently completed the erection of phase one which required 750t of steel. This section of the building will eventually house a large chiller unit and for future maintenance of the equipment a walkway gantry has been installed at roof level. 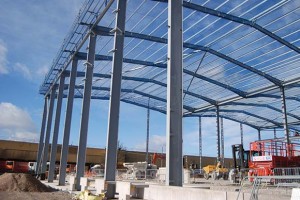 Installed along with the main frame steelwork, the gantry walkway consists of two support beams which are cantilevered off a central line of valley columns. The beams have handrails attached and also support metal mesh flooring.

“Because of the extra loads exerted by the gantry all of the internal valley columns are plated sections,” says Michael Bryars, Atlas Ward Structures Project Manager. “At 3.5t each, these are the heaviest sections on the job.”

Fabricating bespoke plated sections was the most economical solution for the additional deflection and loading according to Ian Marriott, RPS Project Engineer. “Plate girders were more economical in this case as we could achieve the optimum depth of section and flange thickness required by the design.”

An attached energy centre and a goods delivery unit have also been erected as part of phase one. The energy centre is slightly smaller than the main building at 12.5m high and has a length of 29m (four structural bays).

One of the main challenges for the project team is a live substation located within the footprint of phase one. The live facility means there is an off limits corridor within the construction area until the station is decommissioned.

“The substation is due to be removed shortly,” says Mr Goss. “We’ve had to build the steel frame over and around it and leave sections of the cladding unfinished.”

Sainsbury’s is due to decamp its chilled goods section into the completed phase one in June. This will then allow Bowmer & Kirkland to demolish part of the existing depot to make room for the erection of phase two.

Atlas Ward will erect the 500t of steelwork needed for the second phase towards the end of this year, while the third and final phase is due to be completed in May 2015.

“The structure has been modelled and designed as one large building,” says Mr Marriott. “Phase one has bracing located at either end to create a braced box with sufficient stability. Phase two will be bolted onto the first phase which will provide temporary stability until additional bracing is installed, likewise with phase three.”

A first for BIM

“This is the first time we’ve used Building Information Modelling (BIM) on a distribution centre and it is also the first time our client Sainsbury’s has used it on this kind of project,” says Steve Baldwin, Bowmer & Kirkland Design Manager.

There are a number of benefits derived from using BIM one of which is the client gets to see a complete model of the finished building, even before construction has started.

“Sainsbury’s are currently involved in a number of other BIM projects and they like the fact they can view the entire building and basically see what they will ultimately get,” adds Mr Baldwin. “This ensures that none of the services clash.”

BIM also offers complete coordination between all of the project’s team members. The steel frame is one of the first elements of any 3D model’s construction and this job was no exception. Once the frame is designed and modelled by the engineer and steelwork contractor it is then over to the rest of the team to add their bits.

“Using 3D modelling is nothing new to us, it’s now a case of the rest of the industry catching up,” says Michael Bryars, Atlas Ward Structures Project Manager. “By using BIM it means everyone in the project team is coordinated and this speeds things up.”