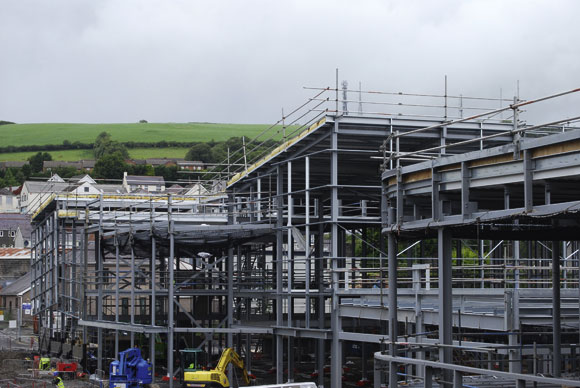 Despite the ongoing credit crunch biting hard in many construction sectors, a number of new town centre retail developments are still progressing. In Carmarthen for instance, the £50M St Catherine’s Walk project will provide the west Wales county town with 25,548m² of new retail and leisure space, including a Debenhams department store and a six screen Apollo cinema.

With a plan to turn Carmarthen into a prosperous and popular shopping destination the scheme also includes a new indoor market – which opened earlier this year, a new public square and a 900 space car park.

Joint venture partners, Carmarthenshire County Council and Simons Developments forecast the development, which will serve a catchment area with a population of 80,000, will create at least 300 new full and part-time jobs. This is on top of the hundreds of construction and fit-out jobs already created during the build programme. 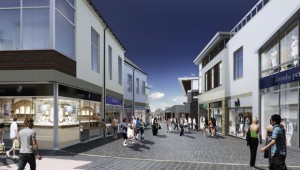 The project is sited to the north of the existing town centre on ground formerly used as a cattle market. St Catherine’s Road splits the site in two, with the majority of the development on the north side, including the main anchor store Debenhams, the cinema and car park. The smaller southern side consists of 12 retail units and the new indoor market. Effectively fitting the required structures into a tight site surrounded by existing buildings meant Simons Design had to use considerable ingenuity during the design stage.

One of the main design criteria for the project was that the new development should not overwhelm the surrounding area, but fit in and compliment many of the older and residential properties. To this end the project is predominantly low-rise, with Debenhams and the car park the only structures which rise to three levels. In this way the new scheme will be a seamless extension to Carmarthen’s town centre retail zone.

As far as steelwork is concerned the first building to be erected was the new market hall. This building stands on ground previously given over to an outdoor market, which will return to the site once the development is complete. An adjacent listed clock tower has been retained and this played a central role in the market hall’s design, as no new building could overshadow it or obscure its sightlines.

Work on the single storey market hall began in April 2008 with the demolition of an older structure. Approximately 200t of steel went into the main frame of the structure, while the roof is formed with long span glulam timber beams, which are connected to the steel and were erected by main steelwork contractor Caunton Engineering, as part of its contract. 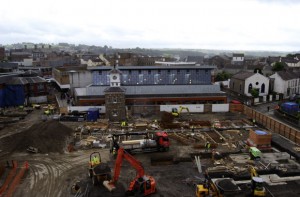 The new indoor market hall and the retained clock tower

There has been a market in Carmarthen for over 800 years and with a sense of history and locality in mind, the new building was also built using Welsh Pennant stone and slate, in keeping with the retained clock tower.

A highly innovative design, featuring sloping walls and roof, certainly makes the new structure stand out. “There are no 90 degrees in the main frame, the walls consist of only vertical members,” says AKS Ward Project Engineer Thanos Tserkezis. “This made the structure challenging to design, as well as the fact we couldn’t put cross bracing on three elevations because of glazing.”

The solution was for bracing to be located on one elevation while the overhead glulam beams were also incorporated into the overall stability equation. The Pennant stone facades also slope by seven degrees and this meant it had to be tied back into the main steel structure without undermining the waterproof insulation.

“It took four weeks to erect the market hall,” says Tony Goodman, Contract Manager for Caunton Engineering. “Some days we were erecting as many as 80 individual steel members as the building consists of lots of small irregular steelwork.”

During August Caunton had largely completed the steel erection for the northern sector of the project and revisited the southern site to begin erection of the retail units which will stand adjacent to the market hall.

The larger northern site will be dominated by the 8,268m² Debenhams anchor store which features two retail levels – ground and first floor – and a second floor which will be used for plant. Prior to steelwork beginning on this building in January, a ground improvement programme, involving vibro compaction, had been completed on the former cattle market land. 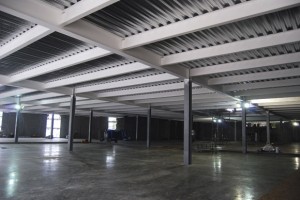 The interior layout of the Debenhams anchor store

The Debenhams steelwork is founded on pad foundations and is based around an 11.4m x 10.8m grid pattern. This size was chosen as it offered the most natural and equal grid for the structure’s dimensions.

Stability for the store is derived from the diaphragm action from the slabs along with cross  bracing at various locations. Bracing couldn’t be located in many areas as the store will be fully glazed along the majority of the lower level’s elevations. The shop also steps in and out at numerous locations. Consequently the secondary steelwork needed a detailed exercise to get it to adapt to the architectural cavities in order to fix to the glazing.

“The large grid pattern was also ideal for the client as there are fewer columns in the retail area,” explains Mr Tserkezis. “Also, the large ground floor slab could not incorporate any movement joints in order not to restrict Debenhams in their tiled floor layout.”

Aside from the Debenhams anchor store the northern sector consists of a further three steel-framed structures: a large two-storey store with an attached restaurant, a retail block featuring seven units which is situated opposite Debenhams along a pedestrian street, and a six screen Apollo cinema complex.

Constructed under the guidance of Simons Construction’s Project Manager Kevin Lake, the cinema’s frame was designed and built with acoustic pads to improve acoustic control and isolate the seat supporting framework from the main frame.

St Catherine’s Walk is scheduled to open in April 2010.