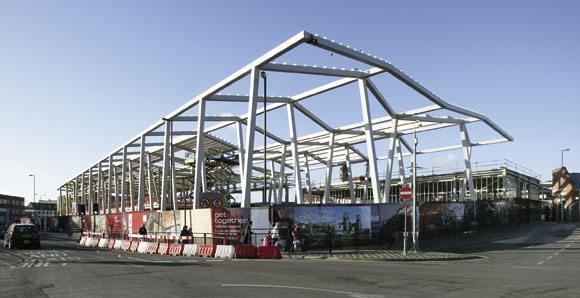 It’s all change in the Yorkshire city of Wakefield which is in the midst of a large regeneration programme, with one of the initial phases centred around a new and innovatively designed market hall.

Over the next two years the Trinity Walk project will transform a substantial area of Wakefield city centre into a new retail quarter. But overall it is a truly mixed-use scheme, as it also includes a new outdoor market area, a city library, two superstores, apartments and two public squares.

The project is scheduled to be completed in its entirety by May 2010, but the first phase is already well under way and centres around a new and visually impressive market hall building.

Award winning architect David Adjaye has come up with the designs for the market hall. His ambition is to create a new civic architecture which owes little to Victorian and Edwardian buildings and design. The new market hall will replace a rather rundown Victorian structure. Adjaye’s design is inspired by buildings in the developing world, using light and the texture of materials to heighten people’s experience.

The market hall building is a steel-framed structure formed by five rows of sloping columns which lean inwards by eight degrees. One of the outer rows of columns is constrained by an adjacent road and is consequently skewed and not parallel with the other column rows. 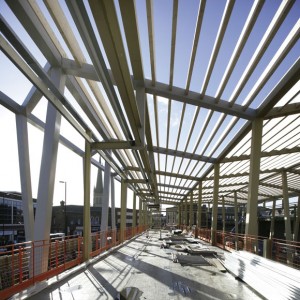 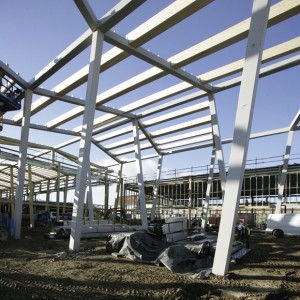 All columns slope by eight degrees 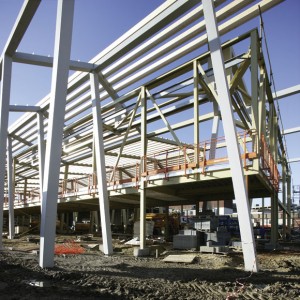 Above the columns, the building is topped with a clear plastic roof supported on a series of glulam (timber) rafters which in turn are connected to the main steel framework.

The sloping columns lend a visually unusual aspect to the project as well as forming three main spans of 8m, and two perimeter spans of 3m, which run the entire length of the 56m-long structure.

“The columns give the market hall a unique look, but they are also integral to the structure, for instance those along the gutter line contain rainwater down pipes from the roof.”

Hiding pipework within the columns was not just done for aesthetic reasons, but does mean the building has done away with ugly and unappealing gutter pipes around its perimeter.

“All columns are connected at the top with hidden fixings,” adds Mr Vaughan, explaining another measure the construction team have undertaken to make the building as visually pleasing as possible.

“The larger the members the easier it is to design stiff connections between them,” he adds.

The geometry of the project presented a number of design challenges, not the least of which is the pitched roof, which also slopes at a number of angles. The building’s perimeter has no room for bracing, as an eye-level row of windows – which are intended to give the impression of a floating roof – doesn’t permit extra steelwork.

Consequently, the structure’s bracing is derived from its portal frame design with all joints at roof level, where the columns meet the rafters. Because the maximum stress is at this point, large bolted connections have been added, and to maintain the visual appearance they are all hidden.

Steelwork contractor Billington Structures cut a hole in each rafter to enable access for bolting to the column. This connection was then hidden behind a plate which was subsequently welded to the column.

The portal frame design also takes into account any stability concerns, while sway was taken care of by using large columns. “Square hollow sections measuring 350mm x 350mm are used,” says Mr Paxton. “And these were also ideal for taking the gutter pipework.”

The market hall is divided into two sections, a larger indoor sector and an outdoor area, both under the same roof. A partition wall, approximately two thirds along the structure, separates the two sections.

Connected to the market hall there is a small steel-framed administration and storage building, while adjacent there is another new building which has been designed as a fresh produce market.

The site of the new market hall was originally the site of Wakefield Bus Station, which has recently relocated to an adjacent plot. Shepherd Construction initially came on site during September 2007 and started by ripping up old concrete roadways and generally preparing the ground for the steelwork, which was then completed in March.

As well as providing a visual landmark structure, the market hall will also kick-start the rest of the Trinity Walk project. Once the hall is in use this summer, the existing market across the road will be demolished and the land cleared and readied for construction of retail and residential elements of the scheme.

Summing up the project, Mr Adjaye says he is very excited to be involved in Wakefield’s transformation. “This is an important regeneration project and I am honoured to have designed the market hall, which will be a public place for the community to do business, engage, debate and celebrate.”