A school for future needs 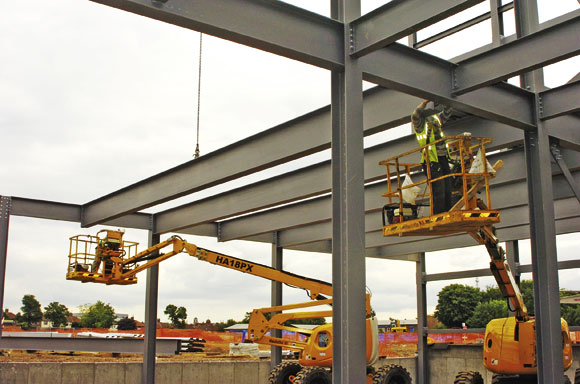 In-built flexibility has played a major role in the design of a new school in Liverpool, where all teaching blocks can be enlarged and rearranged to accommodate changing future term needs.

Many towns and cities throughout the UK are benefitting from the Building Schools for the Future (BSF) programme. Ageing and unfit school buildings are being replaced with new and architecturally driven structures, set to inspire future students and staff alike.

Liverpool is no exception and a number of futuristic designs are being realised as part of a £485M transformation of the city’s secondary schools. One example is the new West Derby School which is set to open in September 2010.

This £27M complex will replace the existing West Derby comprehensive, which is currently split across two sites at Bankfield Road and Quarry Road, as well as incorporating the Ernest Cookson school for boys with special education needs.

The school buildings are being built on playing fields near to the Bankfield site, and once construction is complete the old school will be demolished, making way for open space and a new staff car park. These playing fields are large however, and much is being retained to be converted into new sports pitches for the school.

As for the school buildings themselves, the steel framed structures are grouped about two central courtyard spaces, which run north-south down the site. A technology block and sports block are situated on one side of the courtyards with two teaching blocks opposite, again in a similar north-south orientation. 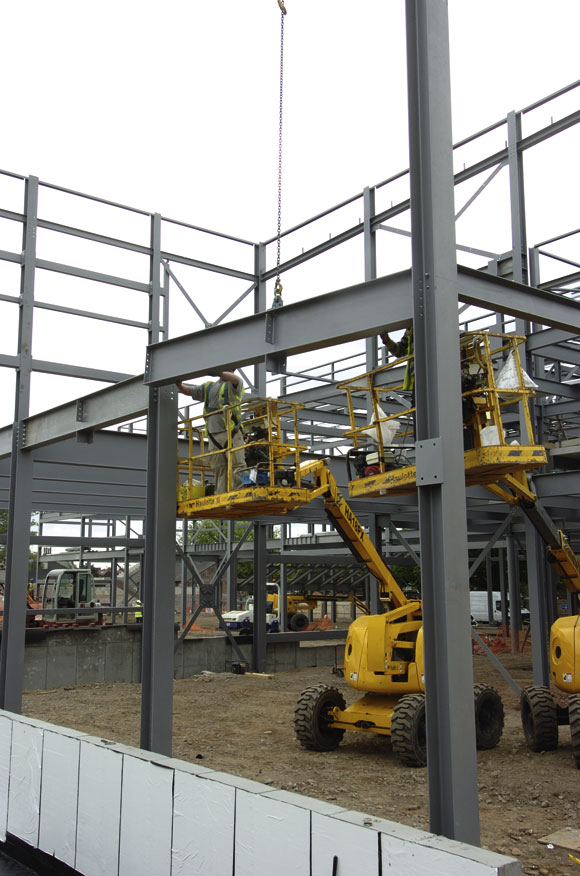 The majority of steel has been erected around a constant 7.2m grid plan 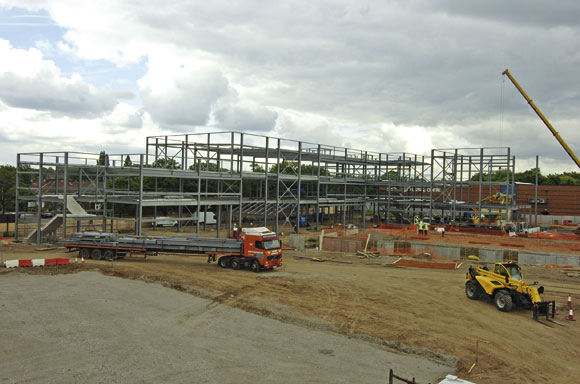 To the north, a community block containing a public library and a 200-seat lecture theatre is turned through 90 degrees to run east-west across the site, maximising the frontage to the main West Derby Road and so creating a ‘solid protective urban edge to the street’ as architect BDP describes it.

To the south of the site a dining hall and kitchen building with an adjacent main entrance area closes the courtyard. Beyond this to the south there is a sixth block, containing the Ernest Cookson school, which protrudes south into a landscaped area.

The buildings are predominantly three storey in height but they step down to two storeys to the south east and south west ending with the single storey Ernest Cookson school. In total the buildings have a ground floor footprint of 6,896m2 which equates to a total floorspace of 15,163m².

However important the school’s floorspace is, at West Derby it will be able to be adapted and reconfigured in a number of different ways. Flexibility is one of the key designs of the school says Jonathan Richards, BDP Project Architect. Each of the two teaching blocks will feature movable internal walls which will ensure total flexibility and allow single classrooms to be joined up into larger teaching spaces.

“Teaching methods are moving away from classes with 30 kids and one teacher with a blackboard to smaller groups, which results in better teaching,” explains Mr Richards. “With this in-built flexibility the classes can be reconfigured from traditional classrooms into these smaller clusters or even into larger spaces for vocational activities or exams.”

The steelwork design of the teaching blocks is based around a regular 7.2m grid pattern with the majority of columns located in external walls and the few internal walls not featuring movable partitions. All classrooms within the school are 60m² and this larger size together with the shape of the rooms facilitates numerous ways of configuring the furniture to ensure flexibility.

The partition walls are hung from the floor beam above and slide along a track embedded in the floor slab. Although these classroom dividing walls look similar to any other internal wall, they can easily be moved by any able bodied person.

Toilets, stairs, structural cross bracing and risers have all been strategically positioned to allow two thirds of the teaching blocks to be reconfigured in the future.

“This approach has been extended to the technology block,” says Mr Richards. ”Here toilets, bracing and risers are all located at either end of the building to avoid the partitions.”

The technology block will house the practical teaching areas of the school with engineering and construction activities accommodated in workshops on the ground floor, design on the first floor and science laboratories on the upper level.

A similar construction approach has also been adopted for the community block. Here the steelwork is being erected around a slightly larger 8.5m gird to allow more column free space. The top floor lecture theatre will be able to be opened up to the adjacent drama studio, allowing it to function as a professional theatre for performance, concerts and conferences. To allow this extra functionality in the second floor, internal columns end at the first floor ceiling, leaving the top floor with 20m clear spans.

“Future adaptability was one of the main reasons for choosing steel as the main framing material,” says Farhad Afshari, Project Engineer for AECOM. “However, the most important factor in favour of steel, and one which Balfour Beatty was extremely keen on, is its speed of construction. The school needs to be finished in time for Autumn 2010 and by the middle of this Summer the building’s frames were already up, way ahead of where we’d be with concrete frames.” 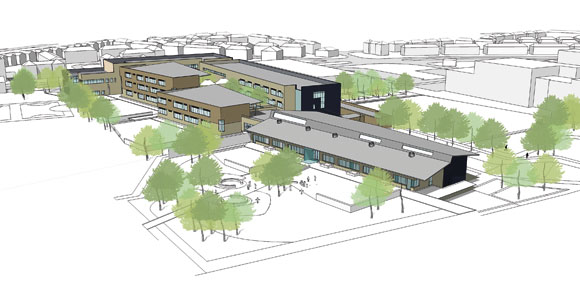