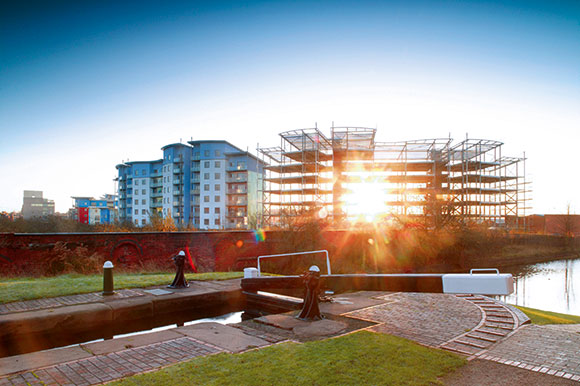 Phase 1 is already complete, with Phase 2 due for completion this summer

A major regeneration development of apartments on a prominent canalside location in Walsall has benefited from the use of structural steelwork. Martin Cooper reports.

The residential project, which is already half completed, has generated much local interest and helped turn this part of the town centre into a desirable location in which to reside. The project achieved some national recognition by winning the Best Canalside Regeneration Project in the UK 2011 awarded by the British Waterways Trust. 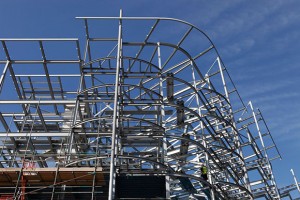 Funding for this two phase scheme came in part from the Government’s Homes and Communities Agency, to provide a mix of affordable eco homes to rent or buy. The first phase, which was completed early in 2011, comprises of two apartment blocks, one an eight-storey building with 84 flats, the other a five-storey structure with 17 apartments.

The second phase is due for completion this coming summer and consists of a further 164 apartments, in two separate eight-storey blocks. The steelwork frames for this phase were completed during last November.

Each of the four residential blocks has reaped the benefits of being constructed with structural steelwork. Cost, efficiency and speed of construction were all important considerations when the choice of framing material was made.

“We looked at all materials, including concrete and timber,” says Clive Jessup, Director of contractor and developer Jessup Build Develop. “But after consideration we decided that steel met all of our needs, especially the speed of construction, as the first phase had to meet a tight deadline. 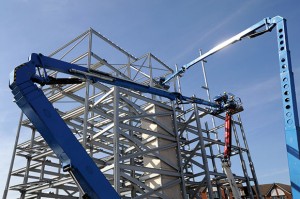 Steel frames helped the contractor with a speedy erection

“We also needed a lightweight framing solution because there are many old limestone mine workings beneath this part of Walsall.”

Jessup Build Develop purchased the site in 2005, and commenced building the apartments in January 2010. Prior to purchase most of the site had already been cleared of any old structures and the mineshafts grouted. Interestingly, one industrial unit has remained and stands in between phases one and two, this buildings is adjacent to a plot which has been earmarked for a commercial development consisting of 4,797m² of office space.

As mentioned speed of construction was an important criteria, as the first phase had to be completed by March 2011. Once the ground was prepared steelwork contractor Traditional Structures was able to commence its package, which also included curved feature balconies, metal decking, precast stairs and the installation of insulated membrane roofs. 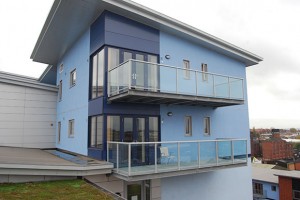 “The choice of metal decking with the steel frame creates a composite structure, which helped keep the weight down, compared to a precast solution,” explains Graham Marshall, Partner of structural engineer B Marshall. “This then meant less cost, as smaller piled foundations needed to be installed.”

As well as selecting to go with a steel framed solution for the project, Jessup are also keen to point out that wherever possible they have also selected as many local subcontractors as possible. Traditional Structures are one of these companies, being based just up the road at Cheslyn Hay.

Steelwork for all of the blocks has been erected around a fairly regular 6m and 8m wide grid pattern, with steel bracing providing the structure’s stability.

“The majority of the bracing is located in partition walls and in corridors, but we’ve also fitted some in the exterior walls, but only where it wouldn’t interfere with windows,” explains Phil Hadley, Traditional Structures’ Director.

Importantly steel’s flexibility came to the fore while the initial phase of apartments was already under construction. For architectural reasons, the eight-storey block’s roof is not constant, but instead features a number of pitched steps. This originally meant some of the top floor apartments would have had a much higher floor to ceiling height than the block’s other flats. 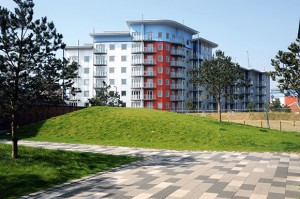 “Many of this building’s apartments had already been leased to the Walsall Hospital Trust and they asked if they could have a few more three bedroom units than we had available,” says Mr Jessup. “The architect, Steve Faizey, quickly realised that we could include an extra floor within three of the top floor units and this would convert them from two to three bedroom flats.”

Steelwork erection was already underway, but this design alteration was easily and quickly incorporated into the steel package, and the entire project team say it could not have been achieved so effortlessly with any other framing material.

After analyising the structural model, the solution proved fairly simple and the supporting columns remained the same, and only extra floor beams needed to be inserted into the framework to create what is in effect a mezzanine level.

Summing up the project, Mr Jessup says Jessup Build Develop has never built a residential scheme with steel before and the company pretty much learnt about the material as they went along.

Would they use steel again? Yes, he says. “We’ve used all other framing systems before and this one has worked well for us on this project, helping us to keep to a tight deadline and by being economical.” 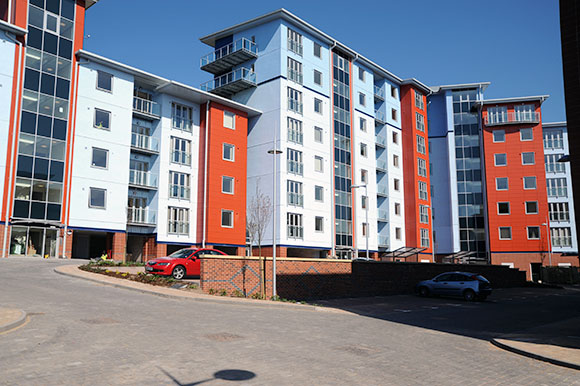 Phase one of Waterfront South

Today there is a greater awareness of the need to respect the environment and the requirement to limit the impact on climate change. This has led to a growing appetite for sustainable buildings and in line with this increasing trend, Waterfront South apartments boast a number of ecological credentials.

All apartments meet the Government’s Code for Sustainable Homes Level 3, which means that they will deliver at least a 25% improvement in energy use over current building regulations.

The buildings feature green roofs, which help with excessive rainwater run-off as well as attracting wildlife. While internally, each apartment is fitted with a NIBE advanced air heat recovery system which provides heating and hot water. 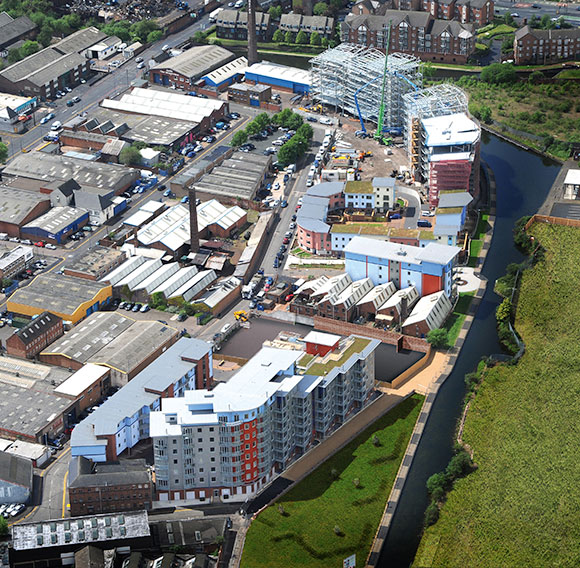 An aerial view of the project under construction